Jurgen Klinsmann on why veteran Thomas Muller is the man to END England’s Euro 2020 dream, Gareth Southgate’s lack of a ‘streetwise’ player… and how fearless Bukayo Saka can drive Germany ‘CRAZY’

Jurgen Klinsmann keeps bringing the conversation back to one man. No matter which direction you try to lead him, the Germany legend knows who, he believes, will make the difference at Wembley.

It is a player whose qualities, says Klinsmann, England do not have. He does not use these exact words, but what he is alluding to is force of personality, street-smarts, perhaps even cynicism.

Maybe those traits are why Germany have reached 14 major finals, and England just one.

‘Thomas Muller is the real difference-maker,’ announces Klinsmann, setting the tone for his thoughts ahead of the last-16 showdown.

In Germany, they call the Bayern Munich star ‘Radio Muller’. In short, it is because he never shuts up. And neither does Klinsmann when on the subject of the forward, to whom he gave his senior debut when in charge of Bayern in 2008.

‘I would say this game is really 50-50. But if Thomas Muller has his day, with his experience and his drive, my hope is that he gets that moment and steps up.

‘That does not mean he needs to score goals. He just needs to connect the pieces and get the right energy going among his team – and give them the belief that they can do that.

‘He’s the connector of this tournament team right now, and I don’t see England with a player like that.’

But surely, we venture, England have players of an equal, if not greater technical ability than Muller? 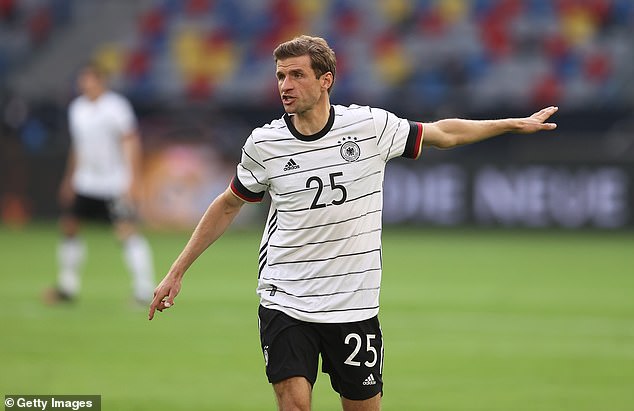 ‘No, it’s not about that level,’ counters Klinsmann. ‘They’re all at the highest level. It’s about the type of game they’re playing.

‘England have to influence it more with individual brilliance, taking people on, doing something creative. Like Jack Grealish is exciting, he’s fun to watch. Phil Foden, Mason Mount, they all have their brilliant moments.

‘But throughout the 90 minutes, you cannot name one English player who you think, “OK, he really runs the show, he dictates the tempo, he calms things down or maybe goes to the face of the referee and makes a complaint”.

‘Like the famous Spanish team with Carlos Puyol. Every time there was a tricky moment, you saw him in the face of everybody. That’s what I mean, a certain type of a leader. It doesn’t necessarily mean he has to be brilliant with everything he does individually, but he runs the show in a certain way.

‘That’s what Thomas is doing. He runs the show for the entire attacking element of the German side.’

Without Muller, Klinsmann believes there would be no England versus Germany on Tuesday. 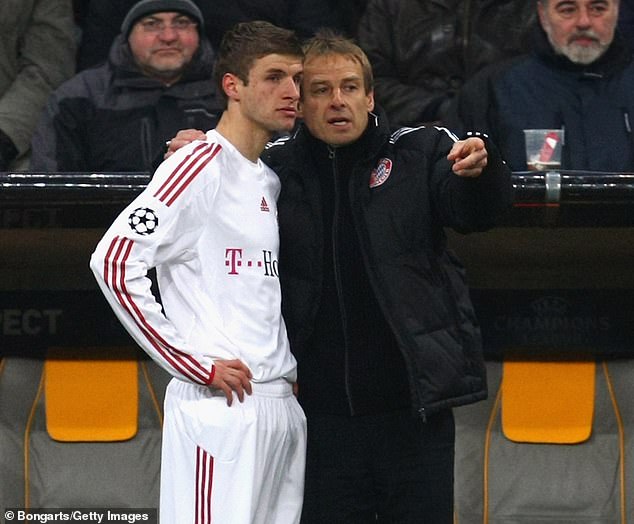 The Germans are only in the knockout rounds because of a late goal to draw 2-2 with Hungary in their final group fixture. Muller, starting from the bench because of a slight knee problem, was introduced for his 105th cap as panic set in.

‘Hungary, that was scary,’ says Klinsmann, who can smile about it now.

‘But then Thomas came on for the last 20 minutes and he calmed everyone down – he told them what to do up front and they figured out a way to create two or three chances. Thankfully, one of them went in. The presence of Thomas made the difference, “Just relax a second guys, we’re going to do it, you know”.’

Klinsmann, during a chat from his hotel in Manchester, where he is working for the BBC, talks as enthusiastically about just one other player – Kevin Keegan.

It is a slight tangent, but the point he wanted to make is that, for all of the hype around the history of the fixture, the Germans like and respect the English.

And Klinsmann loved Keegan, whose name he would ‘scream’ in the street as a boy, an affection intensified when the England captain joined Bundesliga club Hamburg and won successive Ballon d’Ors.

‘There is so much admiration for English football in Germany,’ he says. ‘Growing up in the 1970s and 80s, we watched English football constantly, especially the great Liverpool team. I was crazy about Keegan and Kenny Dalglish. Kevin then became an idol at Hamburg. 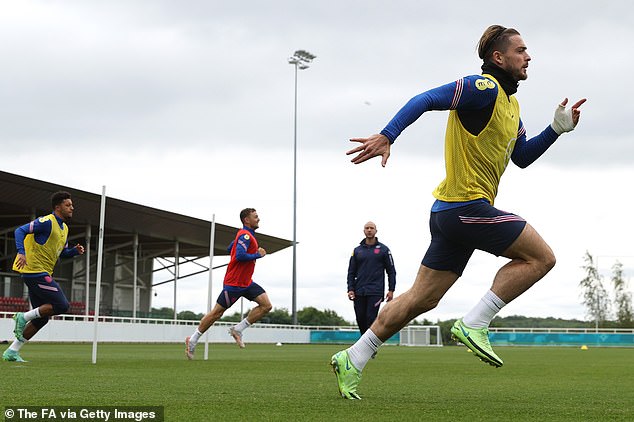 ‘Now, there is a lot of respect for the England team in Germany, especially over the last 10 years with the dominance of the Premier League in world football.’

Klinsmann, though, rejects the suggestion made by countryman Didi Hamann that the rivalry means more to England than Germany.

‘It is a big rivalry for us, too,’ insists Klinsmann, winner of the World Cup in 1990 and Euro 96, beating England in both semi-finals.

‘I wouldn’t downplay it at all, not one little bit. Maybe we have two or three other countries that we almost put on the same level, especially Holland.

Klinsmann told Sportsmail on the eve of the tournament that the expectation in his homeland was for their team to reach the semi-final, at the very least.

So what is the mood like in Germany after a far from convincing group stage?

‘There is anticipation for the game, but there are also mixed feelings because of the types of performance. There are a lot of question marks that the fans have right now. It is very difficult to judge where this team stands.

‘They played OK against France, but lost with an own goal. They were very good against Portugal (won 4-2). That is the Germany that we want to see – we have been waiting to see that for a couple of years. 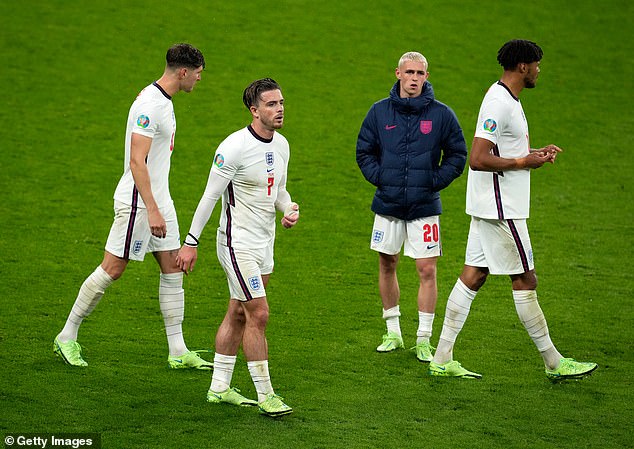 ‘But when it comes down to England versus Germany, excitement takes over – it’s do or die. Public viewing will be everywhere – there will be a lot of beers in Germany, too.

‘You just wish it was the semi-final or final.’

At the World Cup in Russia three summers ago, Klinsmann was just arriving in the country as Germany were going home, the holders humiliated by a group-stage exit. It allowed him to focus on England.

‘I saw Gareth Southgate build a backbone through that tournament for what we see now. It’s exciting to see from the outside, that pipeline of young players coming through the English system.

‘Sometimes being less mature is better, because you fear less. The example is Bukayo Saka. When you have a youngster who doesn’t think too much, he can drive you and the opponent crazy!

‘Gareth has turned this England side into what it is today. I think the squad, and especially the first XI, is good enough to go all the way to the final. 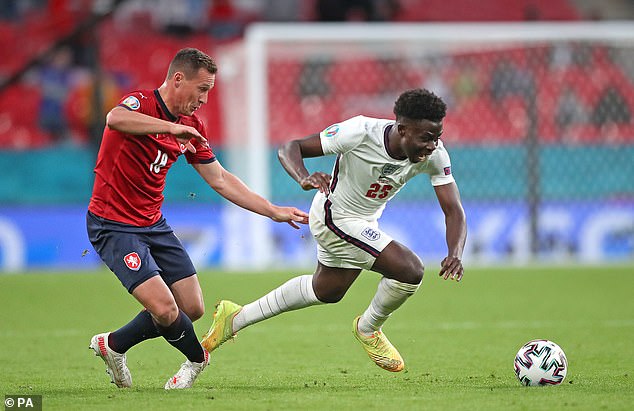 ‘Gareth can be very proud of what he’s done, but now, everything will be measured by results.’

For Southgate’s opposite number, Joachim Low, his time is up after this tournament.

Low took charge after being Klinsmann’s assistant at the 2006 World Cup in Germany, a journey to the semi-final that signalled the rebirth of their national team. Eight years later, in Brazil, they lifted the World Cup.

‘Myself and Jogi always wanted attractive, entertaining, attack-minded football,’ says Klinsmann. ‘Then we started to implement it. We said, “OK, we need to change the approach for Germany”.

‘What Jogi has done in these 15 years is amazing. I just hope, for him, he gets his exit on a high – I just hope it’s not on Tuesday night!’

Jurgen Klinsmann is part of the BBC Football team. Follow Euro 2020 on the BBC across TV, radio and online

Related posts:
Previous Post: Jos Buttler admits 'the dream' is to play every match this summer
Next Post: Antoine Griezmann wanted by Man City as ‘alternative to Harry Kane’ transfer