The visitors could not build on Ryan Christie’s free-kick that somehow beat goalkeeper Danny Rogers from 35 yards.

Celtic dominated possession and Killie were dangerous on the break, but neither could add to the scoreline.

Alex Dyer’s hosts have now not won in seven outings stretching into last season but will be pleased to have ended a run of six consecutive defeats to the Glasgow side.

Celtic had beaten Kilmarnock 3-1 three times last season, but Neil Lennon’s side on this occasion had to settle for stretching their undefeated run away from home to 13 games.

Dyer had looked to the experience of Gary Dicker in midfield, picking the Irishman ahead of Greg Kiltie, but the holding midfielder paid the price of a professional foul on Odsonne Edouard as Christie fired home the free-kick from what was Celtic’s first effort on goal.

Former Aberdeen goalkeeper Rogers made his debut at half-time last week as a replacement for fellow summer signing Jake Eastwood and looked to be deceived by the flight of the ball as the Scotland midfielder’s strike from all of 35 yards found the inside of a post.

Kilmarnock refused to be knocked out of their stride and centre-half Jullien was at fault as the hosts levelled.

He allowed Rory McKenzie to push him off the ball on the touchline and, when the pass was played through to Kabamba, the big striker wriggled clear of the Frenchman before being man-handled to the ground.

Barkas was rarely to be under threat again on his debut, but the Greek goalkeeper’s despairing fingertips could not prevent Chris Burke finding the corner from the penalty spot for the winger’s second goal in two games.

In the other goal, although a foul was eventually given, Rogers redeemed himself with a fine late save to deny last weekend’s hat-trick hero, Edouard.

What did we learn?

A few eyebrows have been raised by Dyer’s preference for Englishman Kabamba ahead of Scotland striker Eamonn Brophy two weeks running.

But the big former Hartlepool United 27-year-old justified his selection, roughing up Jullien and fellow centre-half Kristoffer Ajer in a way that few have previously. If he can continue that form, and the evergreen Burke can continue to inspire on the wing, a long-awaited win must surely be on the cards soon.

Celtic started the season last weekend in a style you would expect of a side aiming for a 10th league title in a row, but their famed fighting spirit was missing on this occasion and it is rare sight to see a Neil Lennon side being bullied by the opposition.

Some have suggested that Celtic are an unstoppable juggernaut on the way to a historic milestone, but Kilmarnock have shown that 10 in a row is not a foregone conclusion and that others in the Premiership might have something to say about that.

Man of the match – Nicke Kabamba 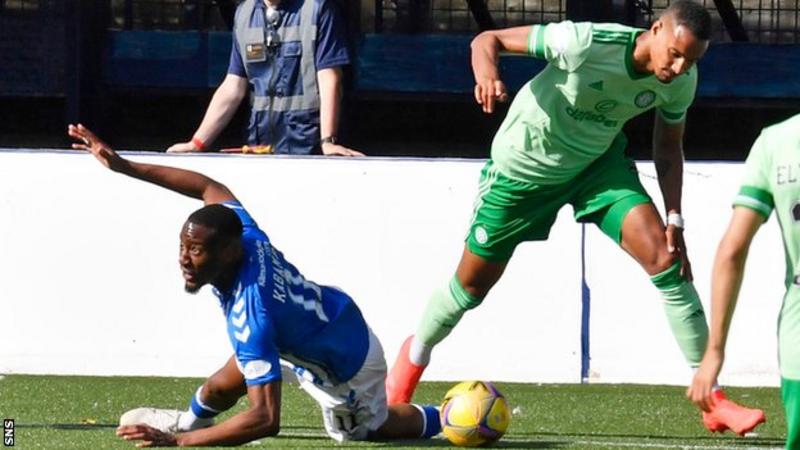 What did they say?

Kilmarnock manager Alex Dyer: “They gave 100% and were calm even when they went a goal down. We had a little spell after the goal went in when we panicked a little bit, but we weathered the storm and I thought we were quite comfortable. There is no need to blame the goalkeeper – he knows it’s a long way out.”

Celtic manager Neil Lennon: “We knew it would be a tough place to come. So we have to take the point and move on – it’s not the end of the world. There were aspects to our game we could do better – particularly second half we had all the ball but just lacked finishing touch, our final ball.”

Kilmarnock will hope to build on the draw but will not get it easy as the visit a Ross County side on Wednesday who have opened with two straight wins.

Celtic are also on their travels again and will be hopeful of taking out their frustration on St Mirren, who lost 3-0 away to Rangers earlier.

Attempt blocked. Odsonne Edouard (Celtic) right footed shot from the centre of the box is blocked. Assisted by Kristoffer Ajer.

Callum McGregor (Celtic) wins a free kick in the defensive half.

Chris Burke (Kilmarnock) wins a free kick in the defensive half.

Greg Taylor (Celtic) wins a free kick in the defensive half.

Chris Burke (Kilmarnock) wins a free kick in the defensive half.

Attempt missed. Hatem Elhamed (Celtic) left footed shot from outside the box misses to the right. Assisted by Olivier Ntcham.

Greg Taylor (Celtic) wins a free kick in the defensive half.

Nicke Kabamba (Kilmarnock) wins a free kick in the defensive half.