Federico Chiesa is part of the rebuild at Juventus

Thomas Tuchel’s staff are renowned as some of the best in the game at figuring out opposition, but an issue this week has been that Juventus are still trying to figure out themselves.

That is about much more than selling Cristiano Ronaldo, which is really seen by most of the Juventus hierarchy as a relatively minor detail in terms of the football. The team was already on the decline with the Portuguese in it, and they wanted to move him on.

Far more relevant to the current situation are what his wages represented.

This is a Juventus that thought they would be in the European Super League by now, immediately solving a number of largely self-inflicted financial problems. Trying to keep up with clubs owned by oligarchs and states has naturally made the effect of many of those decisions worse, and influenced them in the first place.

It has all ultimately led to a summer where they had a net spend of £0.5m, despite the need for much more movement.

These are the primary reasons for the current uncertainty – rather than the absence of Ronaldo. Max Allegri is now trying to sort a squad that has parts built to different ideals, and different budgets. It is currently split between big purchases, young talent, free signings on ludicrous wages and these curious post-Covid deals where fine players are brought in on initial loans like Manuel Locatelli.

That squad make-up is the greatest indication of the confused thinking at Juve over the last four years, which has seen them go from a club on the brink of Champions League success to one that has lost their supremacy in Italy.

It is remarkable now that Ronaldo was supposed to be the signing that took them over the top. It instead signalled the start of so much superficial and sub-standard football thinking.

“Juve never fully committed to any single idea,” one source said. “They didn’t truly know what they wanted.”

The initial idea of signing Ronaldo was undeniably seductive. Juve had twice got to within 90 minutes of Champions League glory. The signing of the competition’s greatest ever goalscorer would surely push them over the edge.

They instead instantly went out in the quarter-finals, to an Ajax playing a much more progressive game.

Juventus were already considering a change to such an approach, to reshape the club around a more modern ideology. That made the signing of Ronaldo at that specific point more curious, but nowhere near as eyebrow-raising as their next two managerial appointments once Allegri decided on a break.

There was first a coach who was never going to build a connection with the club, given previous comments and rivalries, in Maurizio Sarri.

There was then a coach who was never going to be ready, given his lack of experience, in Andrea Pirlo.

None of it really fit together, which meant it was inevitable Juve would always resort to hitting Ronaldo. He could no longer move in the same way but he could still score goals. This is one thing that Ronaldo guaranteed: the certainty of goals, amid so much confusion.

It also meant delaying the future, though, or any kind of decision on what next.

The need to play to Ronaldo’s strengths prevented the move to a more progressive system, precisely because the club’s culture of winning, ensured there could never be any patience.

It has also been followed by another irony, another curious call.

Juventus have returned to a more pragmatic coach, just as they were readying to get rid of Ronaldo. Allegri was much better suited to working with the Portuguese than Sarri or Pirlo ever were.

If ever Juve had the freedom to bring in a more idealistic coach, and reshape the club towards what is a fine young core of talent, it is now.

Figures like the 37-year-old Giorgio Chiellini paint a false picture of the squad profile. Federico Chiesa, Locatelli, Moise Keane, Dejan Kulusevski and Weston McKennie are more representative of its make-up.

The challenge is to adapt to that. 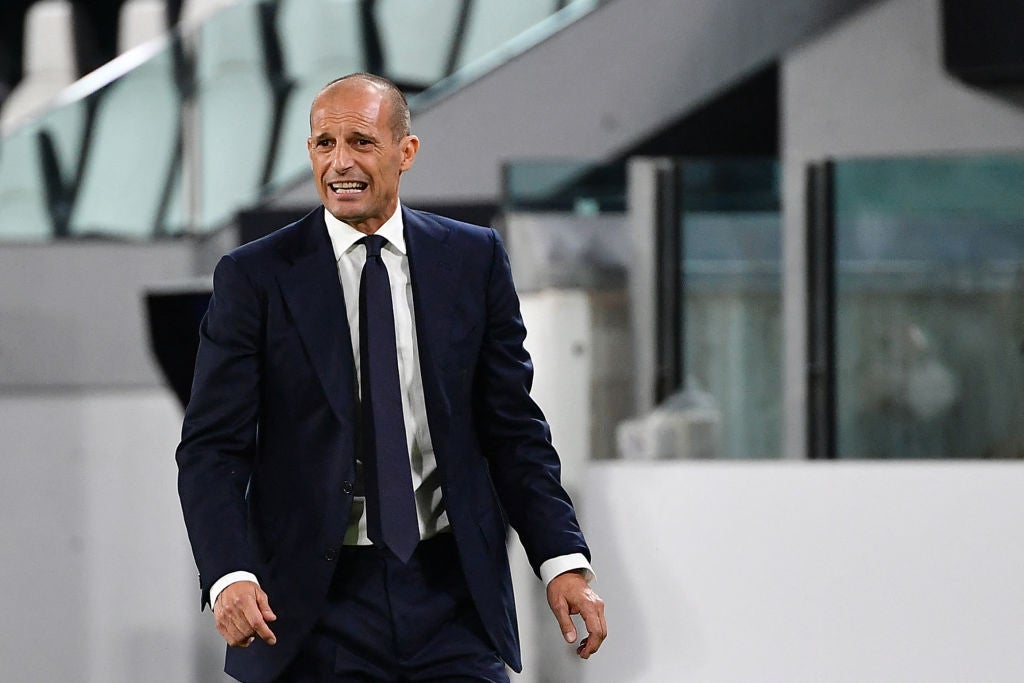 Massimiliano Allegri is guiding Juve through their transition

Many at the club have noticed a change in Allegri, for his part. He was previously the kind of coach that facilitated talent, while fortifying them with tactical improvisation. He has this season been more abrasive and direct, as he has told the players of the need to recalibrate their thinking.

Allegri believes the squad have become too used to just playing to Ronaldo. The feeling is they need to take more responsibility again, to work towards something more collectively coherent.

“When you have a world-class player like Cristiano, you cannot help but use the team to play for him,” Chiellini recently said.

“We must be grateful to Cristiano for all he did during these years at Juventus, but we carry on.

“This will be Paulo Dybala’s team. Over the last couple of years, he lowered his average goals because of Cristiano’s presence, but he is a key player for this team and that is recognised by everyone.”

The team just have to realise that themselves. Juve are essentially going through a learning process again, which has already brought some harsh lessons.

Successive league wins over Spezia and Sampdoria at least indicate the problems of the opening month have been overplayed, and that there are no medium-term concerns. Allegri is at least an assurance of competitiveness, which is what Andrea Agnelli now felt was essential, even if there are growing questions about whether he is sufficiently attuned to the modern game.

There is a growing sense in Italian football that the old order will reassert itself, and Juve could end up winning the league with some comfort.

They’re not there yet, though. Allegri has meanwhile indicated that Dybala and Alvaro Morata will miss the Chelsea game.

That will make it much more forgiving for the European champions. It isn’t an away match at Juventus with the usual awe about it.

That is down to much more than the sale of Ronaldo, though. They’re figuring out so much else.