Jose Mourinho has offered yet another pointed critique of Luke Shaw, but picked the left-back in the team he’d opt for against Germany.

The public spat between the pair has escalated over the last few days in a continuation of their fractious relationship at Manchester United.

The Portuguese wished Shaw well and was complementary about certain aspects of the left-back’s game but also cloaked his comments in a more general critique of the 25-year-old. 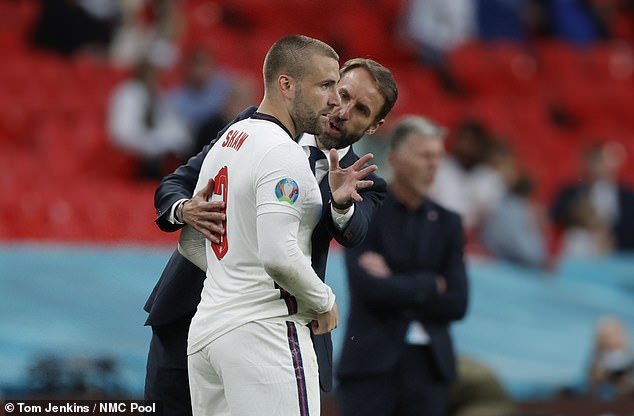 He told the Times: ‘For me, Shaw has played well, better than in the first match, took more risks, didn’t make mistakes.

‘For me, he is not a guy to take set pieces or be in the box to win a duel in the air. He is very fast and a perfect position is to stay back on corners to cope with transitions.

‘But maybe Gareth needed a left foot or he did something very good in training that we didn’t see in the game. But no drama. Maybe against Germany he takes an amazing corner and England win from that. Fantastic.

The Roma manager added: ‘Shaw is a solid player, not making big mistakes, much more focused and concentrated.

‘He covers the space inside very well now which was something we started working on.

‘He is a good left back with a level to be where he is. I just wish him good at the club but especially good in the national team.’

Shaw and the England team are preparing for one of the biggest games of their careers against Germany on Tuesday night.

When Mourinho was asked on talkSPORT who he would select in the starting XI, he gave Shaw the nod. Ben Chilwell has been isolating having come into contact with Billy Gilmour, who tested positive for Covid-19 so Gareth Southgate’s options at left-back are limited.

Prior to the last-16 tie, Shaw spoke about the public criticism from Mourinho, who had attacked the full-back’s ‘dramatically bad’ corners in the win against Czech Republic.

‘I don’t feel like the set-pieces were as bad as he was saying. I might have done one in the second half, a corner, that didn’t get over the first man. But that was one out of three. The other two or three, I don’t think, were as ‘dramatically bad’ as he says.

‘Look, he has got to do his job. I’m used to him saying negative stuff about me, so I just pass it by.

‘His voice is obviously very big. He likes to talk a lot about me, as everyone has seen recently. But his voice is his own. He can say what he wants, I will focus on myself. I take set-pieces at United, so it wasn’t as if it was something I wasn’t ready for.

‘He likes some players, he doesn’t like others,’ said Shaw, when asked about Mourinho’s management style.

‘I fell into the category where he didn’t like me. I tried as hard as I could to get back into his side but it never worked out, no matter what I did. There is no hiding that we didn’t get on. 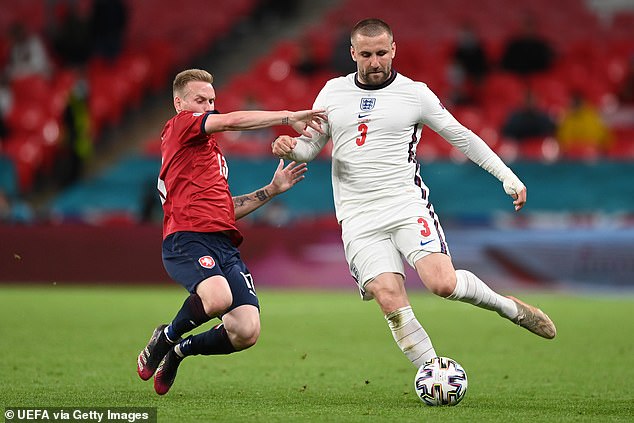 Shaw has improved significantly since Mourinho was sacked at Manchester United

‘I think he was a brilliant manager but, you know, the past is the past. It’s time to move on. I’m trying to move on but obviously he can’t. He continuously talks about me, which I find quite strange. Even some of the lads (here) have said “what’s his problem?” and “why does he keep talking?”

‘Hopefully, he can find his peace with that and stop worrying about me. Clearly, I’m in his head a lot and he thinks about me a lot. I don’t think any of you realise the two or three years I had with him and how bad (the criticism) was then. What he says now is nothing compared to how it used to be.’

Shaw previously admitted being bereft of confidence under Mourinho at United and was repeatedly called out by his manager in public.

He has since rebuilt his career under the more caring approach of Ole Gunnar Solskjaer and is in line to start at wing-back against the Germans on Tuesday night.