Wherever Jose Mourinho goes, trophies, controversy and drama follow. And marriage proposals can be added to that list now after his sheer presence alone sparked a proposal from a Roma fan.

The official Roma page shared footage on their Twitter account of a diehard fan dropping down to one knee shortly after meeting Mourinho. The 59-year-old was meeting supporters before his side embarked on an intense pre-season training session.

The newly-engaged couple shook hands with the former Manchester United boss before posing for a photo, donning Roma memorabilia. Mourinho then attempted to walk away with his squad, before the man ushered the manager back into the camera shot, saying: “Mr. Mourinho, un minuto por favor.”

Eventually, Mourinho clocked on and realised what was going on – briefly attempting to pull away and let the special occasion proceed without him watching on, though that was quite obviously against the best wishes of the fan. It was soon all smiles as the partner agreed to the proposal.

Mourinho and his coaching staff then applauded the couple before the video cut to the pair leaving the ground. The tweet caused a stir online, receiving over 2,200 likes and 500 retweets, though there were mixed opinions on the entire situation.

One fan wrote: “Wow. Jose, Jose. A man brought his girlfriend all the way to meet his idol, Jose Mourinho and chose the moment to propose to her. Pure love.” 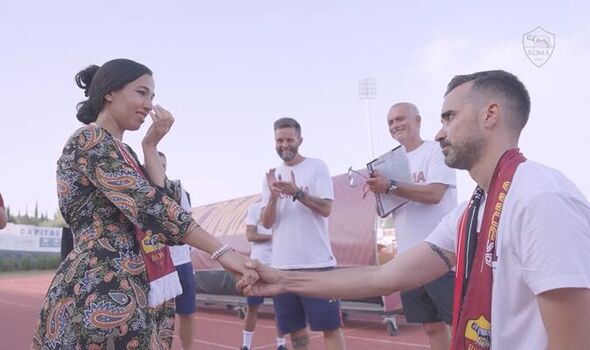 However, some weren’t so fond of the idea; another supporter wrote: “What an odd world we live in.” Mourinho quickly became a fan’s favourite at Roma after he was appointed as manager last year.

‘The Special One’ guided the club to victory in the Europa Conference League last season, beating Dutch side Feyenoord in the final. The win meant that Mourinho is the third manager to ever win all three existing major European trophies, along with Udo Lattek and Giovanni Trapattoni.