The Brazilian has been on Roma’s radar since last summer and Villa are likely to consider offers for him, given there is only one year remaining on his contract.

Villa have already strengthened in midfield, with Boubacar Kamara agreeing a five-year contract with the club after allowing his deal with Marseille to expire, and may look to add another player in that area of the pitch.

With John McGinn, Jacob Ramsey and Marvelous Nakamba also at the club along with youngsters Carney Chukwuemeka and Tim Iroegbunam, Gerrard has plenty of options and the sale of Luiz – although highly regarded by Villa – would give him room for manoeuvre in the market in other positions.

Mourinho is also keen to improve his midfield, with Roma willing to sell Jordan Veretout and also set to lose Sergio Oliveira, whose loan deal expires at the end of the season.

Meanwhile Henrikh Mkhitaryan is out of contract in the summer and has still not agreed fresh terms.

In January, Villa and Roma successfully negotiated a loan deal for goalkeeper Robin Olsen to move to Villa Park. 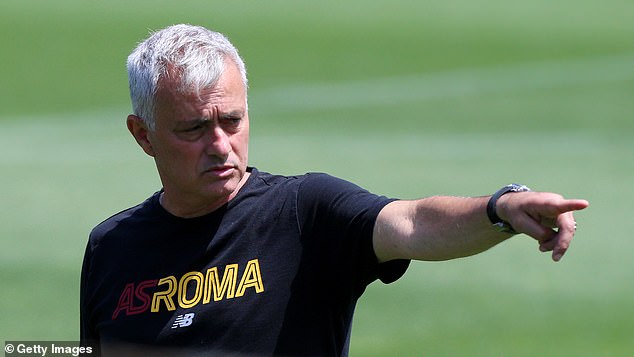 Luiz joined Villa in summer 2019, following promotion to the Premier League, and played a vital role in keeping them in the top flight when football resumed after the three-month coronavirus lockdown. He has played regularly ever since.

Speaking about recruitment, Gerrard said: ‘I’m fully involved in recruitment and I know how important it is in the modern game.

‘Myself, (sporting director) Johan Lange and (chief executive) Christian Purslow speak regularly, and I’m in constant dialogue with the owners as well.

‘We’re all aligned in terms of the targets we want. The most important part of recruitment is your own eyes, what you see and feel, and what areas need support and addressing.’