Our tipster Jones Knows has jumped back into the Premier League markets and is all over a Southampton top-10 finish at 13/2.

I’ll be honest. My life over the past 24 hours has mirrored that of the famous ‘distracted boyfriend’ meme.

I’ve been holding hands with the Bundesliga, being a good boy, recommending some bets – albeit losing ones, it must be said.

But then, whoosh, out of the darkness, the Premier League saunters past. Hair blowing in the wind. It winks at me.

The grip of the hand loosens. I start to drool.

The Premier League is back.

And although the Bundesliga has provided a much-needed distraction in these strange times, I’ve found it a struggle to delve through a form-book involving teams and players that are mostly alien me. Writing a 400-word case on why Timo Werner should be overlooked in the goalscoring markets last weekend for him to then go and bang home a hat-trick might just be a sign from the betting gods. Walk away, Jonesy. Go back to what you know.

With Sky Bet reopening all of their Premier League markets, there’s value to be had. Let’s get stuck in…

Of course, the real thing doesn’t kick off until June 17 but this seemed a good opportunity to add another weapon to our ante-post armoury, which is looking a dangerous beast.

Jamie Vardy (2pts at 16/1) is travelling nicely at the Premier League top goalscorer market, while Leicester to finish top six (1pt at 4/1) and Norwich to finish bottom (1pt at 11/2) are both looking strong investments. We won’t mention my pre-season recommendation of Tottenham to finish second though – definitely won’t mention that.

In my view, Southampton are a relegation-threatened-level team with a top-six manager within their ranks. They are well equipped in the final nine games to make a play for the top 10.

Ralph Hasenhuttl’s style of football, which demands non-stop pressing, creativity from out wide, and a team focused on turning oppositions with quick counter-attacking football, has seen Saints hit some impressive performance metrics at various points of the season.

Two that stand out in my mind were the away victories against Crystal Palace (2-0) and Leicester (2-1). When his team are hot, they are hot. However, inconsistency has hindered progress, to the extent he was nearly dismissed after an embarrassing 9-0 thrashing by Leicester in October.

The remarkable turnaround has won Hasenhuttl and the club plenty of admirers. That the Southampton hierarchy stood by their man and he rewarded that faith, suggests that an impressive structure within the club is in place. 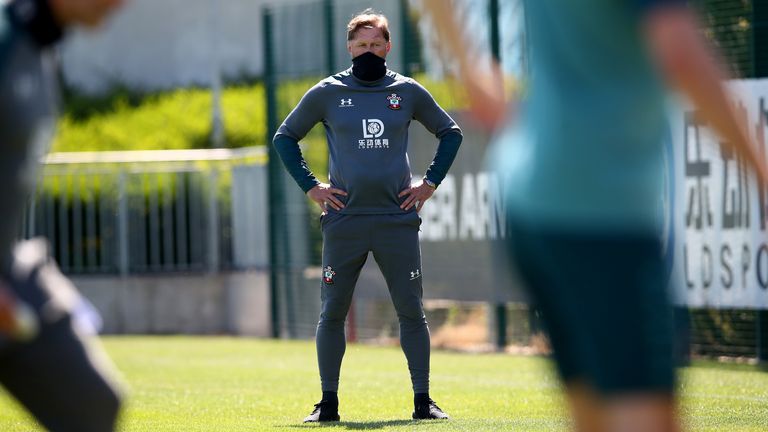 Much of their planning will now be focused on next season now relegation looks unlikely but with the way football could look in these new ‘behind-closed-doors’ times, Southampton might just be primed for a profitable last nine games.

From what we’ve seen in the Bundesliga, and although we’re going on a small sample size, it does seem as though home advantage – to my surprise – has actually been affected by a lack of home support. So far in the German top tier, home teams have won only 19 per cent of games played behind closed doors – a 25 per cent slump than what the numbers usually are.

Only time will tell whether that could be just a bit of variance but it does open the possibility that teams who are notoriously potent away from home may just be more suited playing in these weird atmospheres when the Premier League restarts.

Hasenhuttl’s teams rarely play with the fear associated with teams playing away from home – as shown by their seriously strong record away from St Mary’s this season, the sixth best in the Premier League, a record backed up by their performance metrics. It’s their pathetic home form – the worst in the league – that has significantly held them back but with perhaps a bit of tension eased with the lack of pressure from a fed-up home fan-base, Saints may be able to implement their style which is so successful on the road into their home matches. 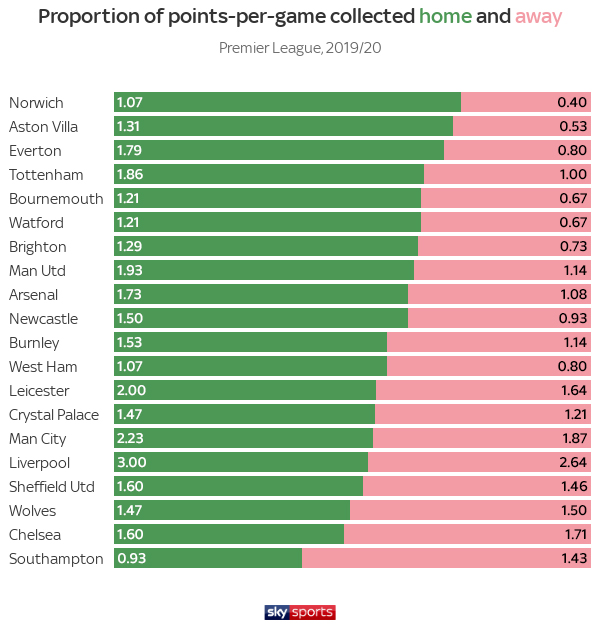