Jamie Redknapp has revealed that Paul Gascoigne plotted his famous dentist chair celebration against Scotland after a night out in Hong Kong. ‘Gazza’ produced the iconic moment after scoring a screamer against Scotland in 1996.

Gascoigne’s famous dentist chair celebration is one of the most iconic moments in footballing history.

The flamboyant attacker laid on the ground and had team-mates squirt him with water after scoring a terrific goal against Scotland at Euro 96.

And now, he has revealed that the inspiration for the celebration was a wild night out before the tournament in Hong Kong.

Redknapp revealed that the team had played China in a warm-up match and gone out afterwards.

He admitted that other England players were at the bar, and that Gazza had insisted that everyone had to have a go in the dentist chair.

After that, Gascoigne insisted that if he scored in England’s game against Scotland at Wembley, he would replicate the moment in celebration.

“So we played China and that night it’s Gazza’s birthday, we flew to Hong Kong, and Gazza’s like everyone’s going to go out,” Redknapp explained.

“Terry Venables turns around and says ‘look boys you’ve got to be sensible though’. So he said to us Bryan Robson is going to go out with you to look after you. Robbo, the best drinker you’ve ever seen, one of the greatest characters ever.

“We just went out, Gazza’s obviously called it on and he’s seen it in the middle of this bar called China Jump, there’s two chairs, ‘right get in the dentist chair, everyone’s got to have a drink’.

“From that moment it turns into chaos. One of the great nights. And Gazza’s like I’m going to score against Scotland and when I do, I’m going to do the dentist chair, and you boys better be there fast.

“Anyway, he scores the most incredible goal, left foot over Colin Hendry, right foot volley, just delicious. I then seen him running to the goal, and I’m like, he’s going to do it.”

Redknapp joked that he was just happy to be around Gascoigne after the goal, and claimed it was the best moment England have had since winning the 1966 World Cup. 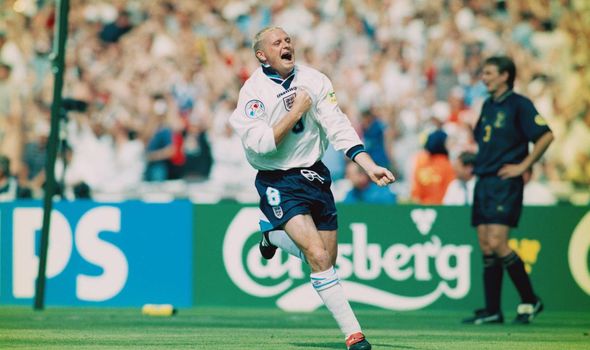 “McManaman’s there, Alan Shearer, I just got straight on the scene, bottle of water, it was just gold,” he continued.

“I was just so excited to be there. Like that guy that’s not meant to be at the party, but I’m in there somehow, I’m in the VIP room.

“I haven’t got many pictures in my house, but I’ve got that one, one of the iconic moments.

“Apart from Bobby Moore lifting the World Cup, that’s the best picture I’ve seen of anyone in an England shirt.”