Given the odds stacked against Aston Villa there was always a chance Jack Grealish might have found himself upstaged at Wembley on Sunday by the result if nothing else. Yet Villa’s captain was not only outshone by the collective glow of a better team in Manchester City, but by one individual who looked just about the brightest talent on show.

It could be pushing it to suggest Phil Foden could be a late bolter for Gareth Southgate’s Euro 2020 squad give his lack of opportunities for first-team action under Pep Guardiola.

But on this display he should not only be considered but figure more often than not in City’s run in which could feasibly still see them lift three pieces of silverware.

Grealish had made no bones about his ambition to further his international ambitions before the end of the season and he should make the squad for the friendlies against Denmark and Italy later this month.

“When you look back on your career you don’t remember assists or anything like that,” he said in the programme. “You look back on what you’ve won. I want to win cups and to be an England regular is a target for the near future.”

If there was no cup on Sunday as City lifted their fifth Carabao Cup in seven years there were some flashes of the talent which has put him on the cusp.

Two neat passes early playing in Anwar El Ghazi in the first half and a crunching challenge to block a cross from Ilkay Gundogan promised.

However those who had come to see him sprinkle stardust on the occasion were left appreciating the skills and energy from Foden instead.

Foden has made four starts in this competition this season, two in the FA Cup, two in Europe and just two in the Premier League.

Given his head here Foden showed not only that City have a ready made successor to Sunday’s captain for the day, the outgoing David Silva, but that Southgate has something to ponder.

Foden provided the assist for the first goal nodding back Rodri’s cross for Sergio Aguero to finish, but there was moment when he took down a cross field ball down on the outside of his left foot, killing it stone dead before cutting into the box. 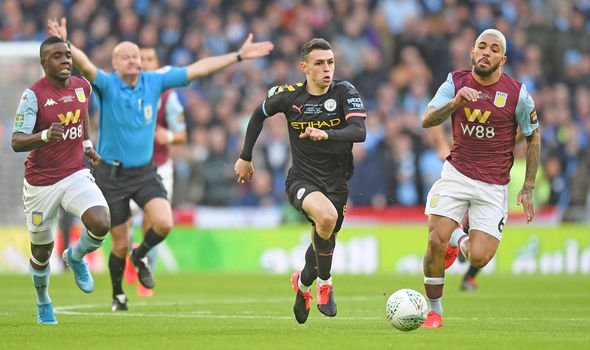 Then in the second half he dropped deep to offer an outlet at right back, chipped the ball calmly over an onrushing Villa player to initiate a move that ended with him fouled 30 yards inside Villa’s half.

At 19, Foden has time on his side but he is a player producing special moments like this now and Southgate might consider, given he has spent much of the season in a tracksuit, the merits of taking a fresh player into the tournament.

Villa will head back to the midlands a little like a family returning from their holidays.

There is just work stretching ahead as they approach the last 10 games of the season two points away from safety albeit with a game in hand.

A run of Leicester City next Monday followed by Chelsea, Newcastle, Wolves, Liverpool, and United to follow will see their hands dirty. 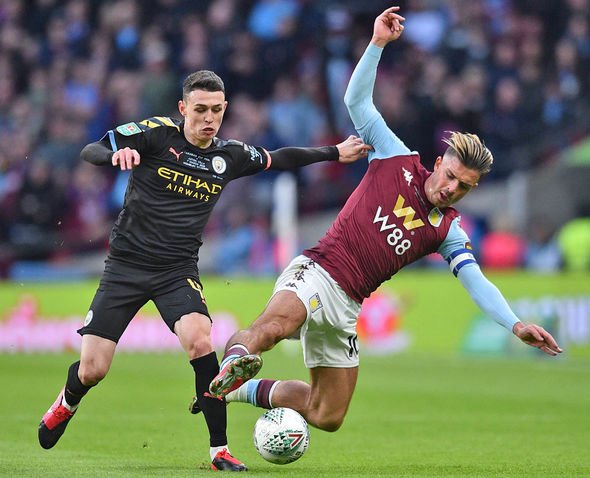 Judged by the battle they put up here and the fact that as City lifted the Cup they stood, virtually to a man on the field, and applauded, spirit and no lack of belief.

It was a classy gesture.

A straw poll of fans before and after would no doubt have exchanged a Wembley defeat for Premier League survival.

And while there are no guarantees, the chances are Villa will returning to the top flight stage next season look brighter not darker after Sunday’s showing.

And they still have Grealish with a point to prove. He may not get the cup but he could keep them up. That would be a legacy if he does move in the summer.