From a world-famous defensive partnership with Holland to battling each other as managers: Jaap Stam’s FC Cincinnati defeat Frank de Boer’s Atlanta United in MLS

Football is a strange sport which serves up all manner of exciting and unpredictable showdowns.

True to form another has emerged this week after two football legends locked horns on the touchline to do battle as managers.

The two old comrades, who have previously worked together at Ajax since hanging up their boots, shared the touchline as the action unfolded on the field.

It was Stam who would take the spoils, after Frankie Amaya’s 76th minute strike was enough to seal victory.

Drama exploded in the early stages of the clash, after Atlanta’s Jake Mulraney was dismissed after just 26 minutes following two yellow cards.

Tensions boiled over in the later stages once Cincinnati took the lead, with JJ Williams picking up a straight red deep in stoppage time as Atlanta battled tooth and nail to get themselves back into the tie. 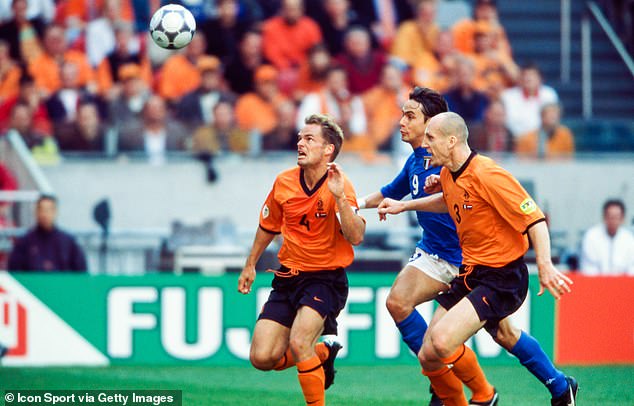 The duo formed a formidable defensive partnership for Holland during the 1998 World Cup, in which the Oranje came fourth

The result sees Cincinnati pick up their first victory in Group E, while Atlanta remain rock bottom after two defeats in two matches.

Nonetheless Stam and De Boer shared a fist-pump and brief embrace on the touchline following the tie, showing their bond remains strong.

The duo formed a formidable defensive partnership for Holland during the 1998 World Cup, in which the Oranje came fourth.

The highly impressive Dutch side saw their tournament come to an end at the semi-final stage, in which they lost a penalty shoot-out to eventual finalists Brazil following a 1-1 draw.