Ange Postecoglou is keeping tight-lipped on reports linking him to the vacant manager’s job at Celtic. But as the countdown to his unveiling continues, we don’t have to look too far into the past to understand what’s probably going through his head right now.

“I don’t enjoy this bit,” Postecoglou told Fox Sports in late 2019, days before his Yokohama F. Marinos team clinched the J.League title. “I enjoyed last year, when everyone was kind of doubting me and not really sure about where we’re heading.”

Ange Postecoglou raises the 2019 J-League trophy in triumph in Yokohama.Credit:Getty

This, then, must be Postecoglou’s idea of heaven.

Before he’s even had a chance to set foot inside Parkhead, everyone is doubting him. Celtic’s fanbase is raging at the prospect of their next manager being some Aussie they’ve never heard of, whose team sat an unimpressive ninth in the Japanese league before this past weekend. Having just watched Rangers spoil their bid for an unprecedented 10th Scottish title in a row, they aren’t exactly in the mood to give the new man time to settle in.

Less than a fortnight ago, the home of Celtic chief executive Peter Lawwell was allegedly petrol-bombed. Football fans in Australia know it already, but they may not have fully grasped it: the Old Firm rivalry really is one of the most intense derbies in the world. It is cultural, political, religious, and deeply ingrained in the Glasgow psyche. Nothing matters more.

And while many will turn up their noses at the overall quality of the Scottish Premiership, there are few bigger clubs in the world than Celtic in terms of worldwide fanbase. 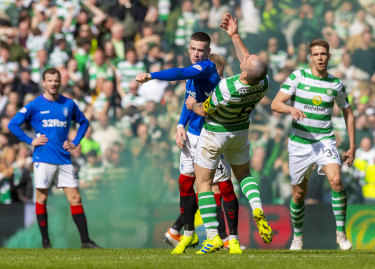 The common themes in the argument against Postecoglou, advanced by a majority of Celtic supporters, became crystal clear very quickly: this guy’s Australian, how can he know anything about football? Why is a club this big trusting someone with so many question marks? If he’s so good, why is he not coaching in Europe already?

These are the biases Postecoglou has essentially dedicated his entire life to dismantling. It’s why his all-conquering Brisbane Roar team was able to change the way people thought about what Australian players could accomplish. It’s why this gig could be perfect for him.

“That’s not something I tend to think about a lot, but that’s probably a little bit reflective of how we see ourselves in Australian football – that it would be a major leap for a club in Europe to almost take a punt on me, even though I’ve got 20 years of success and proved myself at multiple levels,” he told the Herald in another pre-title interview from Japan in 2019, when asked about his ambitions of coaching in Europe.

“Just because I’m an Australian, I don’t demean my success or my ability to coach at the highest level because of geography.” 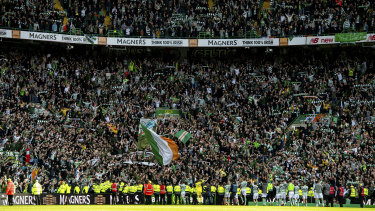 Celtic players celebrate with supporters at Parkhead after an Old Firm victory. Credit:Getty

Postecoglou, 55, will know exactly what he is getting himself into. This is a club where success is the bare minimum expected, where the sack is only ever one loss away, and the pressure is unlike anything any other Australian coach will have encountered before.

If he takes the plunge, he will have weighed all of this up his mind, assessed the level of support and freedom on offer from the club, and decided he is equal to the enormity of the task.

Postecoglou’s teams usually need an initial period to adjust to his demands – he won’t get that in Scotland. But the very nature of the duopoly in the Scottish Premiership, and the imbalance in resources between the Old Firm and the rest, means that winning while rebuilding is not out of the question.

Celtic might have finished a distant second to Rangers last season, but they were still 14 points clear of third place, and lost only five games for the year. His tenure will be assessed on results in derbies – as has been the case for any Celtic manager, because it’s the difference between winning silverware and not.

This could very well blow up in Postecoglou’s face. It’s a high-stakes gamble. But his willingness to embrace risk – on the field, in the way his teams play, and off it, in the way he conducts and expresses himself – is precisely what has set him apart from a generation of Australian coaches in the first place.

If he fails, he will struggle to convince another club in Europe to give him a chance, and the stigma on Aussie managers overseas will remain. If he succeeds, the stigma will dissolve, doors will open for both himself and compatriots with similar ambitions of conquering the world of coaching, and then the question for Celtic fans might well become: how much longer can we keep him?