As a central defender, former Socceroo Jade North made a career out of being ahead of the play. But in his new role, he’s happy to admit both he and his sport are playing catch-up.

At least they’ve finally started. For the first time in the code’s history, Football Australia appears to be getting serious about Indigenous involvement.

Jade North during his time as a Socceroo and (inset) in his new role at Football Australia.Credit:Tim Clayton, Supplied

North, a Biripi man from Taree, has been appointed as co-chair of FA’s National Indigenous Advisory Group – a new panel aimed at addressing the round-ball game’s glaring deficiencies when it comes to First Nations people.

“Just to be a part of it, I’m really proud,” North told the Herald and The Age.

“To be able to work with a very talented, special group to talk about Indigenous issues, just having a voice at the table – it’s groundbreaking for football in Australia.”

Despite being the most popular participation sport in the country, there has been a historic paucity of Indigenous talent at the elite level in football – not helped by high participation fees, which North said is a long-standing barrier to entry. The comparison is stark with the AFL and NRL, where there is an over-representation of First Nations players.

Every so often, a player like North – the only Indigenous man to have ever captained the Socceroos, and a four-time domestic trophy winner with Sydney Olympic, Perth Glory, Newcastle Jets and Brisbane Roar – will swim against the stream.

But it’s telling that since North first pulled on a senior Australian jersey in 2002, only three other Indigenous players have followed in his footsteps. The last was Adam Sarota, and that was 10 years ago. In the A-League today, the number of Indigenous players can be counted on one hand, and with digits to spare.

The outlook is somewhat rosier in the women’s side of the game, where Kyah Simon and Lydia Williams are regulars for the Matildas, and playing for prominent clubs in Europe.

Yet there’s no escaping the reality that football has never had a cohesive, meaningful Indigenous strategy led by the national governing body. There have been various attempts – like the successful John Moriarty Football program, which has expanded nationally, and North’s own “Kicking with a Cuz” initiative in recent years – but they are not strategically aligned. And there are annual Indigenous tournaments, too, but they are not run by FA. 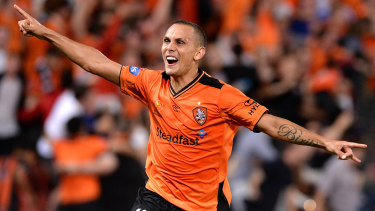 Trailblazer … Jade North during his last stint in the A-League with Brisbane Roar.Credit:Getty

The time is nigh – if not long overdue, in North’s view – for football to bring those disparate efforts together.

“I always thought we could do a lot more,” he said. “I had been knocking on the door that many times with certain people [in football] in the last 10 to 15 years, and all you just got back was a no reply, or it was in the too-hard basket.

“We haven’t done the work. If you look at the other codes, how well they’ve done it, I knew we had a lot of ground to catch up on. The other sports have had such a head start on us in terms of being on free-to-air, implementing these Indigenous programs for quite some time.

“But this is a fantastic opportunity for myself and the rest of the advisory group to come together and make change – help implement programs, help as one voice to go and get funding from the government.

“We’ve had nothing to present them in Indigenous football. But if we put a structured plan around deliverables and outcomes, we can get that funding to help change people’s lives and give them something that’s inspiring.”

The group is due to meet for the first time in early December. It will give FA ongoing advice on cultural safety and retention of Indigenous players, coaches and administrators, pathways, programs and strategic partnerships, and promote reconciliation through the development of FA’s Reconciliation Action Plan.

“I want to bring everyone together,” North said. “We’re going to pave the way and make it easier for people to play football. I’ve been one of the lucky ones to go down that journey. It’d be great to see more Indigenous playing the round-ball game.”