Hungary 1-1 Germany: Hansi Flick’s side still searching for first win in the second edition of the UEFA Nations League after being held to a draw in Budapest

Germany are still searching for their first victory in the second edition of the Nations League after they were held to a frustrating draw by Hungary in Budapest.

Both goals came in the opening 10 minutes at Puskas Arena as Zsolt Nagy opened the scoring before Jonas Hofmann equalised shortly after.

Hansi Flick’s side have three points from their opening three games and sit third in League 1 Group 3 behind Hungary.

Germany, looking to hit top form at the year-ending World Cup in Qatar following their shock first round exit in 2018, their earliest in the tournament in 80 years, next play Italy on June 14 while Hungary travel to England.

The hosts took a surprise lead in the sixth minute when Germany goalkeeper Manuel Neuer punched a Roland Sallai header away but Zsolt Nagy drilled the rebound past the keeper and into the roof of the goal.

Germany’s Hofmann, who had also scored in their 1-1 draw against England on Tuesday, levelled only three minutes later, latching onto a deep, pin-point cross from Nico Schlotterbeck to round the keeper and slot in.

Hofmann should have added another in the 70th when he again charged through but instead of finishing the move himself, he attempted to lay it off for Timo Werner before his assist was intercepted in front of goal. 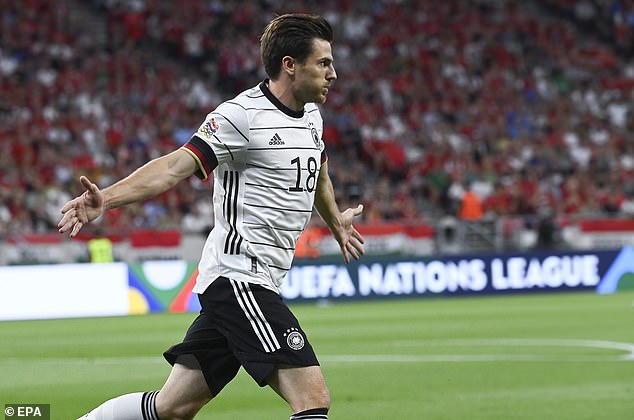 The Germans looked far from sharp in front, clearly missing a natural finisher with Werner struggling to create any real chances.

They were also vulnerable at the back with Neuer making a superb first-half save with his foot to deny Attila Fiola and Thilo Kehrer almost gifting a goal with a back pass late in the second.

Neuer was kept busy until the end, making several more saves to keep them in the game. Hungary had seven attempts on target compared with just one from the Germans.