‘Suddenly everyone feels vulnerable… that shook us’: Bournemouth boss Eddie Howe opens up on how Aaron Ramsdale’s positive coronavirus test has rocked the club to its core

The opening days of non-contact training had — apart from a few teething problems — gone relatively smoothly for Bournemouth and their manager Eddie Howe. It was good to be back on the grass, out of lockdown and kicking a ball again.

There were problems with social distancing and Howe not being able to talk to his players but all those issues were manageable. Then the bombshell of goalkeeper Aaron Ramsdale’s positive coronavirus test shook the club to its core.

‘Naturally, the first thing you think about is the player’s health,’ Howe tells Sportsmail over Zoom. ‘Then his family and loved ones and making sure he hasn’t passed on that infection.

Goalkeeper Ramsdale has tested positive for coronavirus, the player confirmed on Monday

‘There was not one positive within our group during the early stages and we were comfortable and felt OK. But as soon as you get that one positive test, that changes the mindset of everybody. Suddenly everyone feels vulnerable, everyone is alerted to the fact that this is serious and real.

‘Then the unknown comes into play. That shook us. We are now waiting for our next testing times to see if anyone else was in contact with the player.

‘I imagine anxiety is there among the players. I can only imagine they are feeling the same way as I am.’

It was Howe who, amid the uncertainty of what was ahead, managed to provide some perspective back when lockdown began. Football was in disarray, with arguments blazing over pay cuts and deferrals.

Yet, on April 1, the Bournemouth manager made a gesture that helped restore faith during the most frightening of times.

Howe was the first Premier League manager or player to accept a pay cut — a story that was exclusively revealed by Sportsmail. He wishes news of his wage reduction had not made it into the public domain. He did not want the fuss.

His decision to volunteer to take a salary cut had nothing to do with PR spin; if he’d had his way we would still be none the wiser. His reticence speaks volumes for the 42-year-old’s character.

‘I didn’t know it was going to create quite the stir that it did and that felt a little bit uncomfortable for me,’ Howe says. ‘I was just doing it because it was the right thing for me to do. 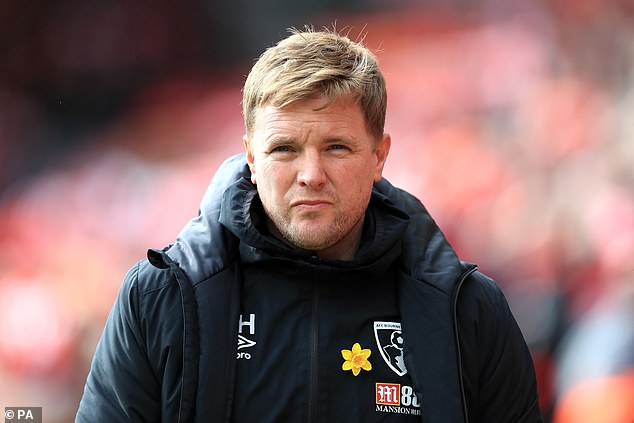 ‘It was knowing about how bad the situation was going to be for the football club, knowing that potentially staff members will be at risk because this is going to have a long-term effect.

‘I felt the least I could do was to show I am willing to help the club and owner. Genuinely, that was what I was trying to do.

‘I didn’t know it was going to hit the news. I didn’t really want it to come out. It didn’t take me a long time to think about. We had a discussion internally with me, the chief executive, technical director and assistant manager.

‘We’ve got a unique relationship and we just came together and thought this was the right thing to do.

‘It wasn’t a great statement from me or the guys. We weren’t looking to impact anyone else —we just made it to protect other people working for our club.’ 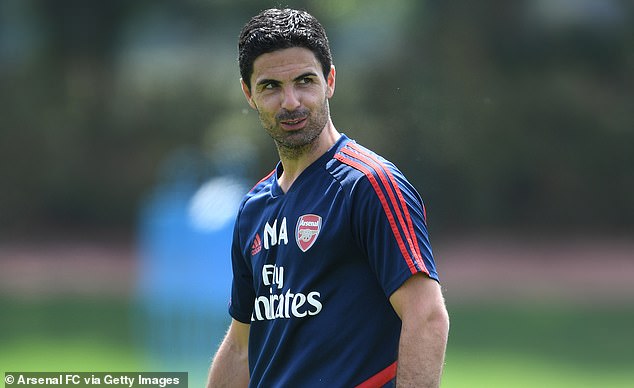 Many others followed suit. Arsenal boss Mikel Arteta is among the managers to have accepted a pay cut, and players across the top division have agreed their own reductions. Howe had set the ball rolling.

By the time he had agreed to forgo a proportion of his income, the Cherries boss, together with wife Vicki, was deep into a routine of home-schooling his two eldest sons, Rocky and Harry.

In between maths and English lessons, Howe found time for a spot of gardening, not to mention continuing with his crusade to become a master pianist.

All of a sudden football was no longer Howe’s daily focus, though he could not help but get involved in the occasional kickabout with his boys in the back garden.

There has been a normality to Howe’s lockdown; the sort of normality you would not necessarily associate with a Premier League manager. 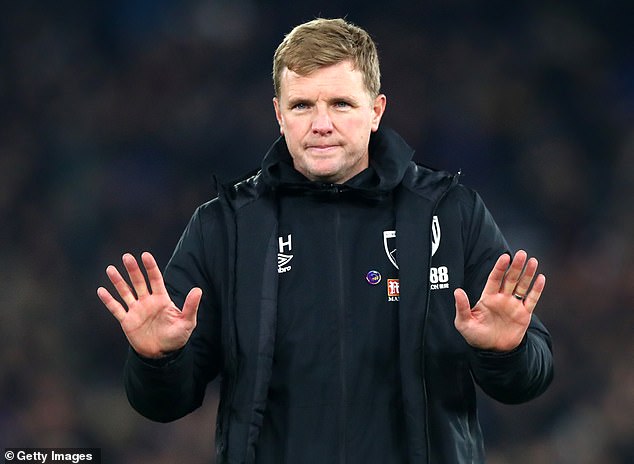 Has lockdown changed him? ‘Yes, I think it possibly has,’ he responds. ‘It was lovely to spend time at home; it’s not something I’ve done for a long time, to spend a period of time at home with the people I love the most.

‘It was amazing and very rewarding, albeit in very sad circumstances. I’ve been trying to make the most of the situation we are in. I absolutely loved it. I already knew what the most important thing in my life was but I think when it becomes so obvious that’s a really lovely thing.

‘I’d love to think I can get that work-life balance where it needs to be. I’m still committed to football and football is my biggest love away from my family and that will never change. But making sure you get the priorities right is hugely important.

‘I think certainly there was a resetting of those priorities. Hopefully my kids will look back in a few years and say, “That was a good time” because it certainly was for me.’

Now, though, Howe and his squad must refocus.

The current restrictions on training pose their own problems for Howe and his players.

‘There’s a lot of things that players feel uncomfortable with but they do it because there is no alternative,’ says Howe, whose side were in 18th place when play was suspended. 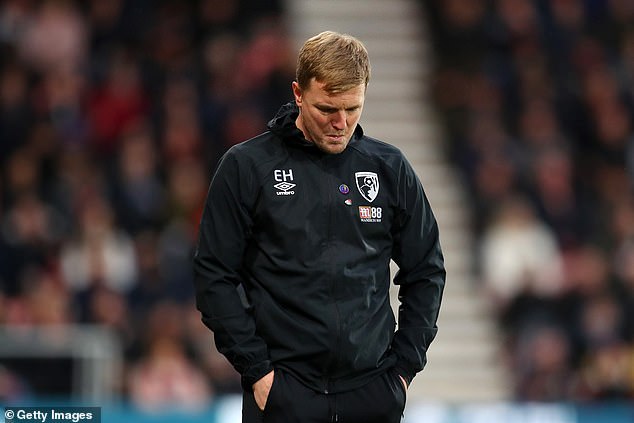 When football returns, Howe’s Bournemouth will be back in the thrust of a relegation battle 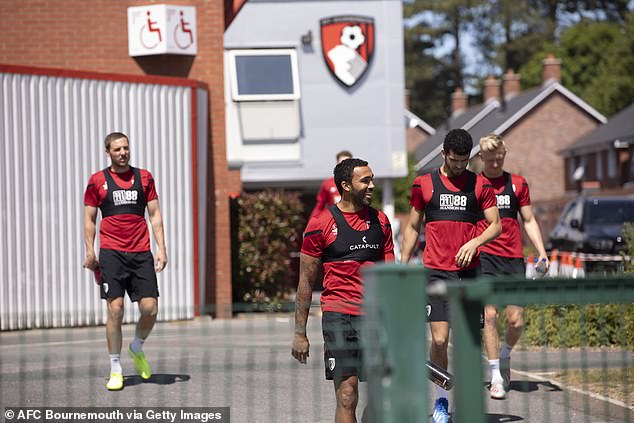 ‘There were a lot of problems with the time they had to prepare themselves for training — 15 minutes is really difficult for them to feel fully prepared because players spend a lot of time getting themselves ready physically for the demands of training.

‘So that was something they struggled with.

‘We’ve had to prepare training sessions on Zoom. You have to adapt — and quickly. There were a lot of unknowns when we came back. It was difficult to know how it would all work.

‘Hopefully we got all our procedures right and made it easy for the players. The most difficult part is the social distancing, where I’m not allowed to get close to the players.

‘For me that’s part of what I do. We’d be having meetings and debriefs and showing them videos. At the moment that’s something we are not doing unless it’s a messaging service where you might text them a few things. But in terms of face-to-face contact — and that’s the bit we pride ourselves on — that bit’s missing, but that is how it has to be.’

Like for every Premier League manager, Howe’s remit is clear: make the best of a difficult situation.

Howe can influence how his team perform but it is the factors out of his control that will cause sleepless nights. Most notable, at least for Howe, is the prospect of playing behind closed doors.

‘It will have a massive impact, it will change the game completely,’ Howe says. ‘Just how it will impact, I don’t quite know yet. Watching games in Germany gives us a slight clue — they have a strange, eerie feel about them. 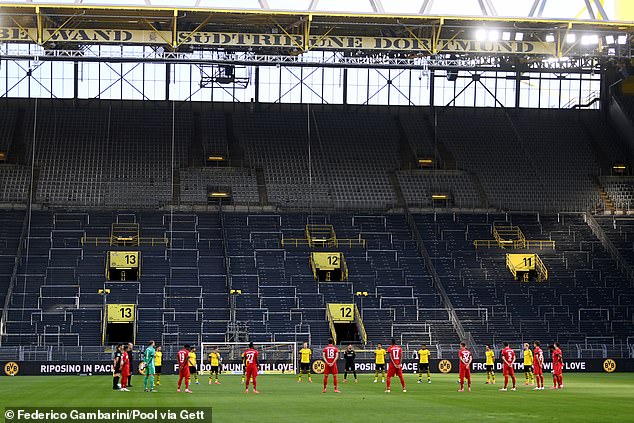 Premier League games will be played behind closed doors, as they are now in the Bundesliga

‘The biggest thing is that the games will be so important but there will be no feeling to back up that importance, which is bizarre.

‘Usually you can feel the energy, you can feel what is at stake. The players know it and in some respects that really does impact their performances positively or negatively. Now we’ve got that tension and drama taken out. The importance of the game is still there but one of the biggest factors — that feeling — is gone.

‘It remains to be seen how it actually feels when you’re in the middle of it. An atmosphere helps to improve performance, without a shadow of a doubt. A crowd can impact a game, I’ve known that since I was playing.

‘The players will know the importance of the games but also millions will be watching on TV.

‘The players will know that as well, so there’s a strange pressure on the players.

‘Maybe not immediate but the pressure will be there after the game, from the reaction of everyone they know and everyone who watched the game.’