Lyon sporting director Juninho has conceded they may sell Houssem Aouar this summer amid interest from clubs in the Premier League.

Aouar has developed into one of Ligue 1’s most creative midfielders ever since his breakthrough in 2017.

Last week, he was the key man for Lyon as they knocked out Champions League favourites Juventus.

Arsenal, Manchester City and Chelsea have all been linked with the 22-year-old.

And they will take encouragement from the latest comments from Juninho, who when asked about Aouar’s future he admitted talks have taken place about the Frenchman.

“Houssem Aouar? When you have great players in the squad, it is quite logical that other bigger teams with greater economic power come to seek the players,” Juninho told RMC Sport.

Meanwhile, Michael Owen has warned Manchester City to be wary of Memphis Depay when they meet Lyon on Saturday in the Champions League quarter-finals.

Depay has returned to fitness after a serious knee injury and scored a penalty against Juventus. 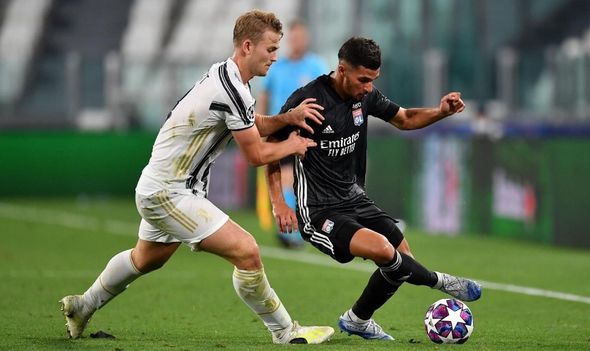 City are the favourites to beat Lyon and reach the semi-finals but Owen says the Dutch forward will be the dangerman.

“City will need to be aware of the threat of Memphis Depay who has now scored in each of his last six Champions League appearances,” Owen told BetVictor.

“However, Pep Guardiola knows from first-hand experience as both a player and a manager, just how difficult this competition is to win and their status as favourites is well deserved.

“City will never have a better chance to finally achieve the ultimate goal of their Abu Dhabi-based owners and I’m predicting a 3-1 win for Manchester City in this one.”

Sergio Aguero was not part of the 27-man squad City took to Portugal for the knockout stages.

The Argentine is recovering from knee surgery but could return if City reach the semis.