Football can be cruel. Never mind Harry Maguire and his red card, spare a thought for poor Ainsley Maitland-Niles. What was shaping up into a promising first start for his country was nipped in the bud with the shepherd’s crook when England were reduced to 10 men after 35 minutes.

Maitland-Niles was the fall guy as Gareth Southgate decided he needed to send on another central defender in Tyrone Mings.

So shortly after Maguire headed off down the Wembley tunnel after his self-inflicted exit, Maitland-Niles followed him from the field through no fault of his own.

The short straw in these situations is always harsh but in this case particularly so – a full debut which lasted less than a half.

It was impossible not to feel for the Arsenal man. 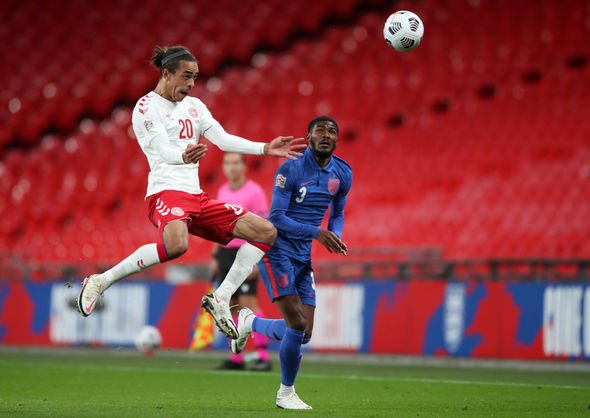 If it was frustrating for Maitland-Niles, it was equally exasperating for Southgate whose side had up to that point played their most incisive football since the restart.

The 0-0 draw between the two sides in Copenhagen last month was the sort of spectacle you would turn to if the Horlicks ran out in the evening. Drearily soporific, it lingered in the memory about as long as a session in front of the washing machine on spin cycle.

But until they went down to ten men and Southgate was forced to jettison it, England showed the 3-4-3 system, which has been widely perceived as negative, could be used more progressively.

The combination play between Reece James and Mason Mount down the right was sharp, unpicking the Danish defence on several occasions.

Its effectiveness, with James overlapping beyond his Chelsea team-mate, contrasted with what was happening down England’s left with Maitland-Niles and Marcus Rashford.

Here Rashford hugged the touchline and Maitland-Niles, another right-footer, used the space inside.

The necessity or otherwise of fielding a left-footed player on the left-hand side of the field is a hot topic for England. They reached a World Cup semifinal under Southgate with the right-footed Ashley Young gamely ploughing a furrow down the left so it is not an prerequisite for a successful team.

But spin the debate round ask yourself how often would a side pick a left-footed right-back?

England’s balance is undoubtedly helped with a leftie somewhere on the left-hand side of the field, preferably in defence. Think Ashley Cole or Stuart Pearce.

Southgate knows as much but can point to a cobweb-filled cupboard.

If Ben Chilwell had been fit he would almost certainly have started having served his time for breaking the rule of six. 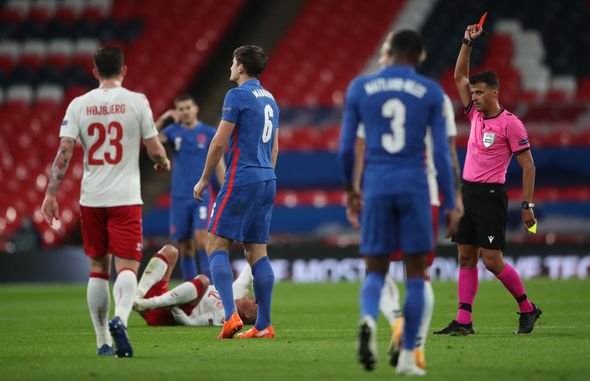 But he wasn’t and with Kieran Trippier also unavailable because of a bafflingly-timed FA hearing into gambling charges, England turned to Maitland-Niles as their left wing-back.

A Wembley specialist having performed superbly for his club in the FA Cup semifinal and final at the stadium and won the man of the match award in the Community Shield, he did no wrong in England colours.

It was just a pity Maguire’s folly cut his big night short.