Pep Guardiola insists he wants Bernardo Silva to stay at Manchester City but also admits he won’t stand in the attacking midfielder’s way should he wish to leave.

Silva has been one of Guardiola’s star performers since joining joining the club in 2017 but has been linked with Barcelona in recent weeks.

Xavi is said to be a big fan of the Portuguese, who was considering an Etihad exit last summer until Guardiola convinced him otherwise.

Speaking during a press conference on Friday morning, Guardiola dismissed suggestions that he had said Silva was leaving.

‘I didn’t say he’d leave,’ said the City boss. ‘The answer was the same as last season. You ask me every week, I always say I want the best for the players.

‘I want Bernardo to stay. 100 per cent. But at the same time if you want to leave, have an offer, clubs come to an agreement. Common sense. 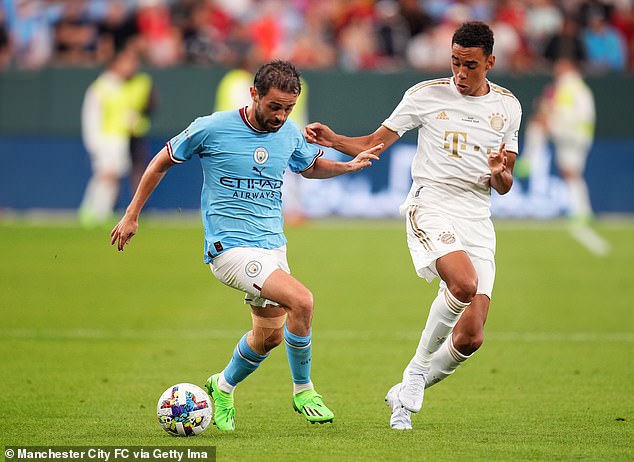 ‘He’s an important player, special, but I don’t know what will happen. We didn’t get any offer ,last season neither. Bernardo’s ready, training well for Sunday.

‘I talk a lot with Bernardo, with all of them, maybe because I’m getting old and we know each other quite well. I’m more relaxed as a manager with them, I know them.

‘Their feelings, the good and bad moments. But not about this situation, if I have to tell him something I tell him, but we don’t have doubts about the situation. He’s happy, engaged, he has a beautiful dog. He’s happy here, what will happen will happen.’