Brighton boss Graham Potter was ‘delighted’ to finally toast Premier League survival after his side ground out an uninspiring goalless draw at home to Newcastle.

Albion have been well placed to extend their top-flight adventure to a fourth campaign for a number of weeks but Potter had steadfastly refused to celebrate safety until it was mathematically certain.

Former Swansea boss Potter has endured a challenging first season of Premier League management, implementing a new playing style at the Amex Stadium since succeeding Chris Hughton last summer, in addition to dealing with the impact of the coronavirus pandemic.

‘The financial implications are massive, especially with how the year has been and how next year looks potentially.

‘It’s so important for a club like us. We’re fighting every year to keep in the Premier League, every year is that challenge. We want to get past that, of course, but it’s so tough.

‘For, me, I’m just delighted for the players, the chairman, all the support I’ve had. It’s really, really pleasing.’

Albion controlled possession against the Magpies but neither side seriously threatened to break the deadlock during a dour encounter which had a distinctly end-of-season feel.

Leandro Trossard and Adam Webster went closest to a breakthrough for the hosts, while Dwight Gayle and substitute Andy Carroll wasted the visitors’ best opportunities by each heading off target from corners. 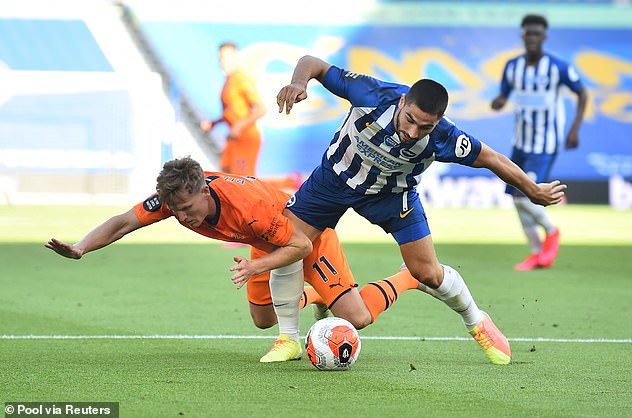 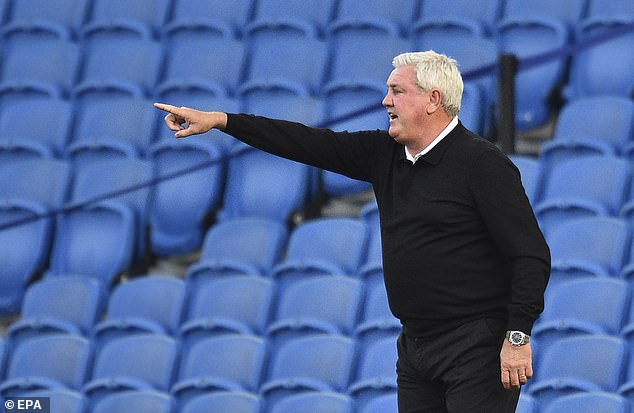 Despite the result, magpies manager Steve Bruce praised the spirit of his players amid injuries

Newcastle manager Steve Bruce praised the spirit of his players amid mounting injury problems and felt his side could have snatched a second-half winner.

The result prevented the 13th-placed Magpies slipping to a fourth successive defeat.

‘The one thing you can’t deny this group of players is their ability to roll our sleeves up and have a go,’ said Bruce.

‘We played two full-backs at centre-back today and they have been terrific.

‘I was delighted with their attitude and application. I thought if anybody was going to win it was going to be us in the second half.

‘It was never a classic but it was important that we put a point on the board, it means Brighton can’t be above us and that’s important to me.’

Magpies defender Emil Krafth battled on to finish the match after a nasty second-half collision with Brighton striker Neal Maupay.

Asked for an update on the Swede’s condition, Bruce replied: ‘He’s got a really, really sore ankle.

‘He’s done well to carry on when I’ve just visually seen it there. He epitomised the spirit of all of them.’