GB Women were agonisingly beaten 4-3 after extra-time by Australia in an epic Olympics quarter-final that had everything on Friday.

Ellen White scored a hat-trick as GB Women were denied victory one minute from the end of normal time, as well as missing an extra-time penalty to make it 3-2, as Sam Kerr’s double sent Australia through to their first Olympic semi-final.

GB Women hit the woodwork three times inside 25 minutes through Keira Walsh, Rachel Daly and Lauren Hemp, but Australia took the lead against the run of play through Allana Kennedy’s header from a Stephanie Catley corner (35).

But White turned it around for GB in the second half, first directing a superb header into the far corner from Hemp’s cross (57), before pouncing on some poor Australia defending to snatch a second (65).

Chelsea’s Kerr levelled late on having been afforded too much room in the box (89) to force extra-time, before a chaotic three minutes in which Caroline Weir saw her penalty saved by Teagan Micah (101) and sub Mary Fowler go up the other end and score with a deflected effort (103). 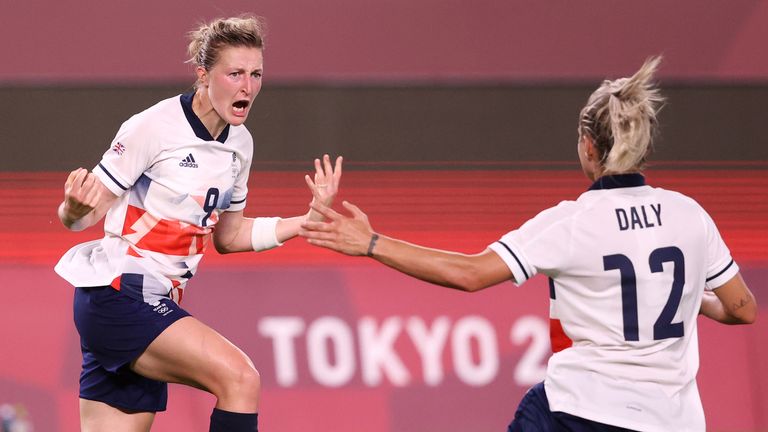 Kerr made it 4-2 with a fine header (106) to become the joint-record scorer for the Matildas with 47 goals, and despite White’s glancing header for her hat-trick (115), Australia held on for a last-four spot, where they will face either Sweden or Japan in the semi-finals on Monday.

Timeline of drama in Tokyo

15 and 24 mins: GB Women hit the woodwork on three separate occasions through Walsh, Daly and Hemp

89: Kerr afforded too much room to take it to extra-time

With both sides looking to reach the last four for the first time, it was GB Women who started the brighter in an eventful first 45 minutes.

Walsh was the first to hit the woodwork, seeing her low, 20-yard effort bounce back off the foot of the post with Micah beaten. Moments later, Daly’s cross on the stretch looped over Micah, came back off the crossbar and fell kindly to Hemp, but her effort was parried onto the post by the busy Australian goalkeeper. 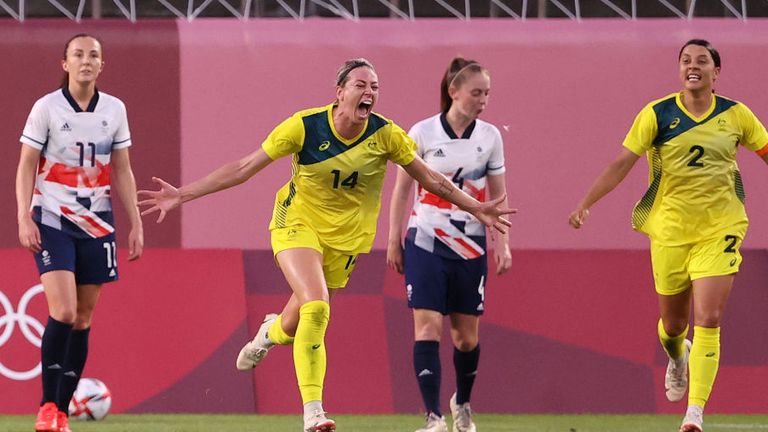 Australia then took the lead after good work from Kerr earned them a corner; Arsenal midfielder Catley delivered, and former Spurs defender Kennedy got above Demi Stokes to head superbly past Ellie Roebuck.

Australia looked the more likely to score after the break – Hayley Raso’s cross found an unmarked Kyah Simon, but her header into the ground was straight at Roebuck.

In truth, GB’s equaliser was also against the run of play as White, who was quiet in the game up to that point, showed her deadly instincts. Rising to meet Hemp’s right-wing cross, White turned home a brilliant header from 12 yards into the far corner. And White continued her brilliant Olympic Games record just eight minutes later, reacting to a mix-up between Kennedy and Aivi Luik in the Australia box to find the bottom right corner with her effort, despite Micah getting a strong hand to it.

As the second half wore on, GB sat deeper and deeper, and were punished as Kerr found acres of space in the box from a long Kennedy ball, taking the ball down before striking low into the net.

Extra-time was every bit as dramatic as GB Women were awarded a contentious penalty; sub Nikita Parris went down under the challenge of Ellie Carpenter, but Weir saw her penalty saved by Micah. 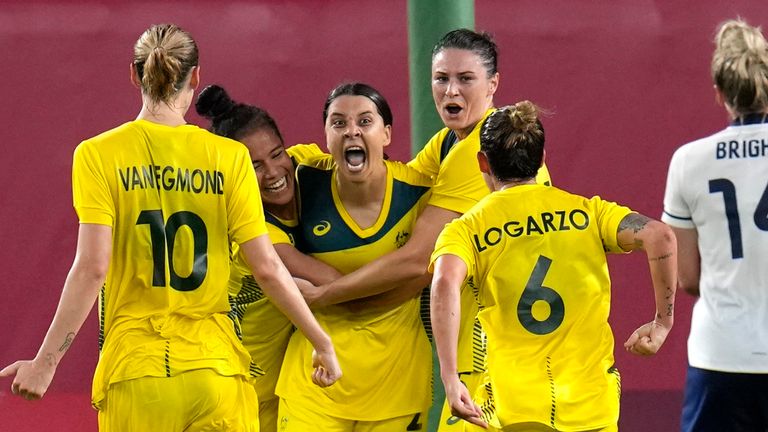 Two minutes later Australia were ahead as sub Fowler’s long-range effort took a wicked deflection off Lucy Bronze and flew into the top corner, before Kerr netted again, getting in front of Steph Houghton to head Tameka Yallop’s cross in off the underside of the crossbar.

White took her tally to six goals from four games at the Olympics to make for a nervy finish, glancing Fran Kirby’s cross over Micah, but Australia held on for victory in a memorable, end-to-end contest in Tokyo.

Australia will face either Sweden or Japan in the semi-final on Monday at midday.