Gary Lineker has backed Gareth Southgate over England’s decision to continue to take the knee during their European Championship campaign. Southgate confirmed on Saturday that his side will kneel in support of the Black Lives Matter movement before kick-off, despite the stance being booed by a section of their own fans on Wednesday.

England’s players held a meeting this week to discuss the issue after their decision to take the knee in the build-up to their friendly against Austria was booed by some supporters at Middlesbrough’s Riverside Stadium.

The stance, which is in support of the Black Lives Matter movement but is separate to the political organisation of the same name, has prompted much debate around the sporting world.

But Southgate spoke passionately in a press conference on Saturday in support of his players’ decision to continue presenting a united front against all forms of discrimination.

“In essence people are booing their own team,” he said.

JUST IN: Hoddle fears Harry Kane may be having transfer chats on England duty

Former England striker and broadcaster Lineker has now come out in support of Southgate, tweeting his thoughts to his 7.9 million followers on Sunday afternoon.

Southgate admitted that the gesture could have an “adverse effect” on his players’ performance if supporters continued to boo, but said they were willing to take that risk in order to stand up for what they believed in.

“The most important thing for our players is to know that we are totally united on it,” he said.

“We are totally committed to supporting each other, supporting the team. We feel more than ever determined to take the knee through this tournament.

“We accept that there might be an adverse reaction and we are just going to ignore that and move forward.

“I think the players are sick of talking about the consequences of: ‘Should they? Shouldn’t they?’ They’ve had enough, really.” 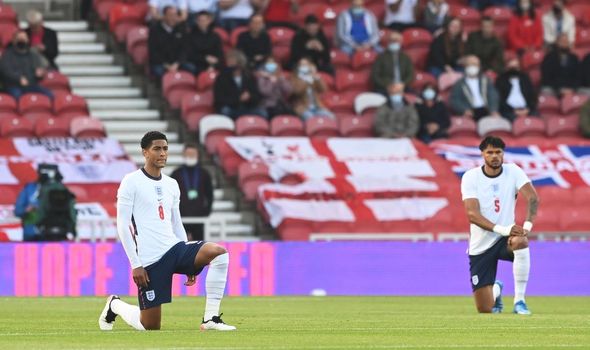 Midfielder Jack Grealish said the booing was something “we don’t want in football” after Wednesday’s 1-0 win over Austria, while Kalvin Phillips said he was “confused and disappointed” by the fans’ behaviour.

England face Romania in their final warm-up game in Middlesbrough on Sunday before playing Croatia, Scotland and the Czech Republic in Euro 2020 Group D matches at Wembley.

Southgate said he would not discuss the issue again if fans booed once more, because “we don’t want to give oxygen to those people.”

The Three Lions’ stance has been criticised, with Conservative MP Lee Anderson vowing to boycott their matches over their decision to take the knee before kick-off.