‘Just like your punditry… not a blooming clue!’: Furious fans SLAM Gary Neville for pre-match optimism after pundit claimed Manchester City were ‘getting done’ in derby with United, before Pep Guardiola’s side score four in rampant first-half

Fans online have blasted Gary Neville for his pre-match optimism ahead of the Manchester derby, as City proceeded to tear apart their rivals United in the first-half.

In a video posted to his Twitter, Neville claimed that Pep Guardiola’s side were ‘getting done’ after seeing the team sheets for both sides prior to kick-off.

But after Erik ten Hag’s side conceded four goals, following a dominant first-half display from the hosts, fans have quickly called Neville out for his wild claims. 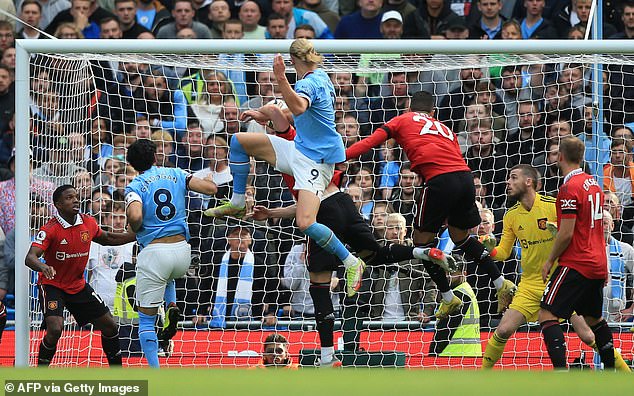 In his Twitter video, Neville says: ‘Well, I’ve just seen the teams here at the Etihad and this lot are getting done! They’re getting done.’ The camera pans to show former City player Micah Richards.

‘Don’t count your chickens Gary,’ Micah warns. ‘My chickens have been counted,’ the United legend says.

After City quickly dispelled Neville’s prediction, as they took a 4-0 lead into half-time with them, fans lamented the pundit for his bold claims.

One fan wrote: ‘Gary Neville before the start of the game – City are getting done… Just like your punditry…not a blooming clue’.

Another mentioned some his pre-match punditry by saying: ‘Gary Neville before the game started “United will be very much in this since it is away, they would counter city with both wide players”’, before adding a number of laughing emojis.

‘Is there a bigger jinx in world football than Gary Neville?’, one fan queried – suggesting the pundit was perhaps to blame for the result. 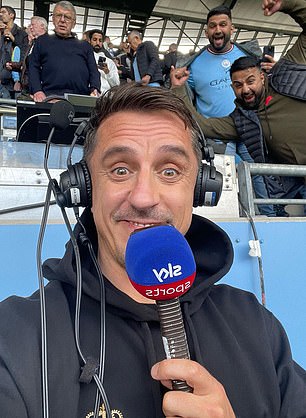 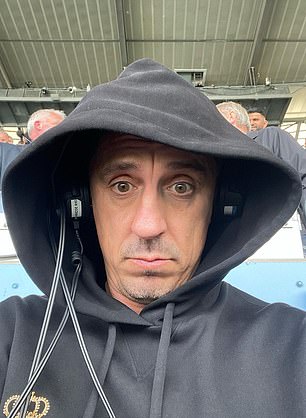 The Sky Sports pundit shared two pictures: one pre-match and one at half-time

Phil Foden opened the scoring early on for Pep Guardiola’s side before a quick-fire brace from Erling Haaland put City into cruise control.

Foden then got his second thanks to Haaland to cap off a brilliant first half for City, resulting in hoards of United supporters to head for the exit and onto social media.

The duo both got on the scoresheet again in the second-half to claim hat-tricks, as United’s Antony scored a consolation for the visitors. 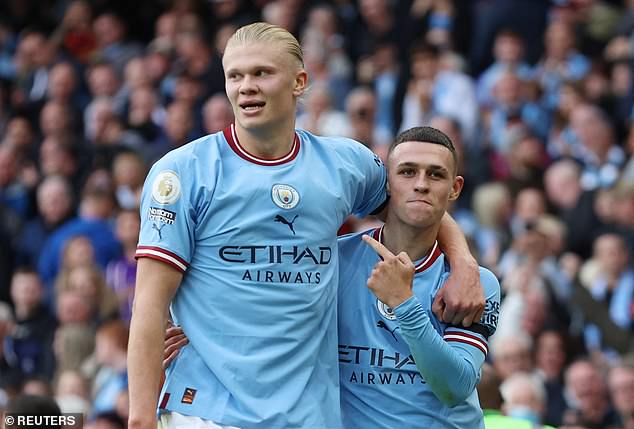