Finland look to build on a strong start to their Euro 2020 campaign when they take on Russia in Saint Petersburg this afternoon.

Finland were 1-0 winners against Denmark in their Group B opener on Saturday, in a fixture that resumed that evening having been paused earlier in the day after the shocking collapse of Danish midfielder Christian Eriksen. The Inter Milan playmaker has thankfully since showed promising signs of recovery – conscious and sharing a positive update from hospital yesterday, though his team-mates were unable to get the result they desired against Finland in the 29-year-old’s absence.

Russia, meanwhile, were thrashed 3-0 by Belgium on Saturday evening, as the world’s No 1-ranked side ran riot in Saint Petersburg, with Romelu Lukaku scoring twice and Thomas Meunier also netting for Roberto Martinez’s side. It leaves Russia, who enjoyed an impressive quarter-final run on home turf at the 2018 World Cup, facing an uphill battle to qualify for the knockout rounds this summer.

Finland, on the other hand, now have a strong chance of reaching the last 16, and would all but guarantee their place in the next round with a victory over the Russians this afternoon. Follow live updates from Finland vs Russia at Euro 2020 below.

In case you missed it…

Finland marked their arrival at a first international tournament with a 1-0 win over Denmark in Copenhagen where the match had been suspended just before half-time after Inter Milan midfielder Christian Eriksen collapsed and was taken to hospital.

The former Tottenham playmaker had suddenly dropped to the ground at the Parken Stadium as he ran back from the Finland penalty area, leaving players from both teams in clear distress.

English referee Anthony Taylor immediately called medics on to the pitch and Eriksen underwent prolonged treatment, with compressions performed on the chest of the Denmark midfielder before he was taken to hospital for further treatment.

Denmark 0-1 Finland: Joel Pohjanpalo’s goal secured a famous win but thoughts were elsewhere on a scary night for the game

After hearing the reassuring news that Christian Eriksen was awake and stable in hospital, both Denmark and Finland’s players remarkably chose to continue on Saturday evening.

No goals had been scored before the day’s distressing events unfolded, but Finland – appearing at their first-ever game at a major tournament – took all three points thanks to Joel Pohjanpalo‘s header, while goalkeeper Lukas Hradecky saved Spurs midfielder Pierre-Emile Hojbjerg‘s penalty.

Victory over the stricken Danes saw Finland end a six-game winless run across all competitions after consecutive defeats in warm-up games, but Markku Kanerva will be aware that Saturday provided unique circumstances.

The Finns launched their first major tournament with a 1-0 win against Denmark on Sunday, but their opening Group B fixture was overshadowed by Eriksen’s first-half collapse.

Eriksen is recovering in hospital and Finland have since relocated from Copenhagen to St Petersburg. Kanerva’s squad could book their place in the round of 16 with victory if Denmark fail to beat Belgium. 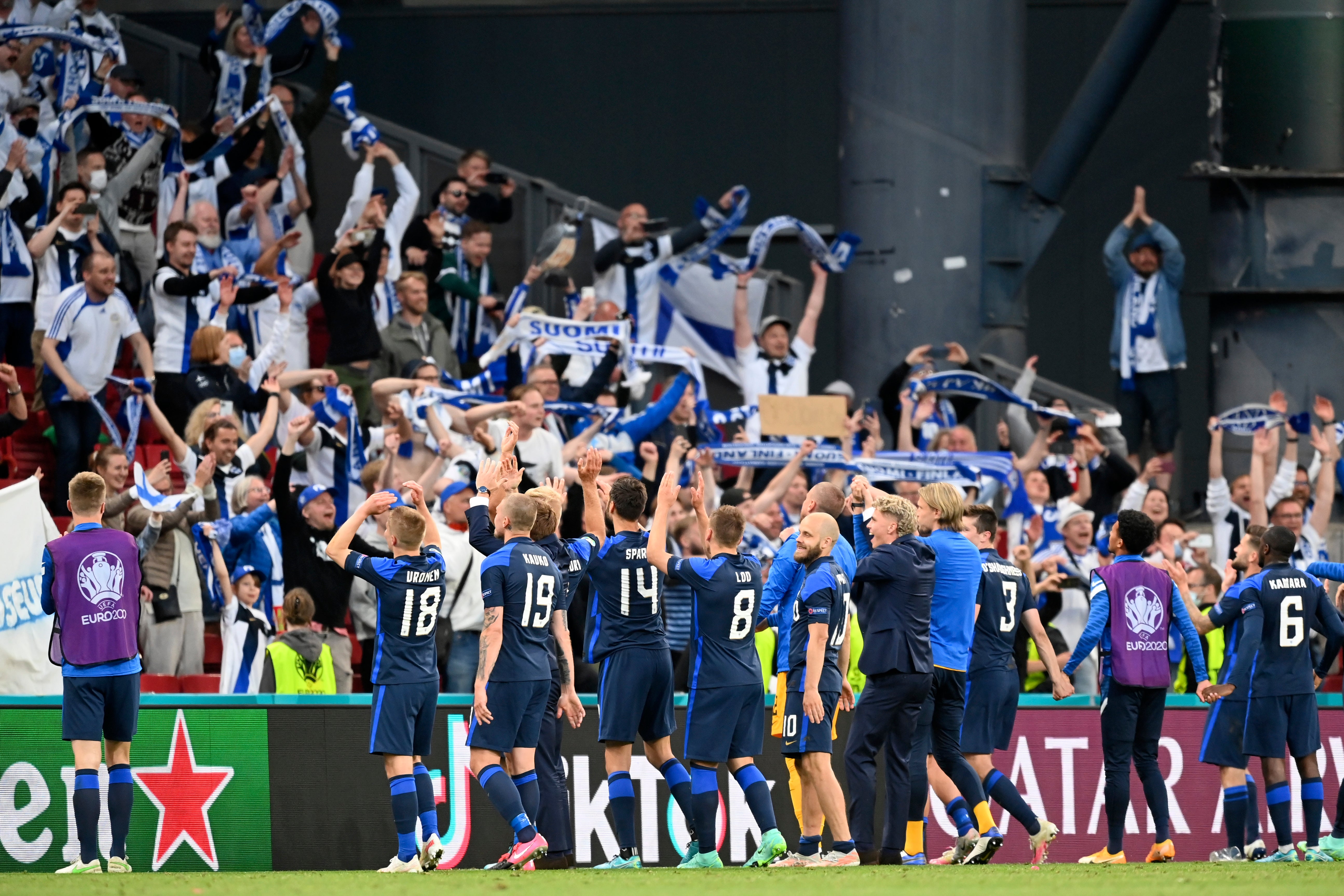 Finland need to be ‘fully focused’ against Russia, manager insists

Russia are bidding to bounce back from their 3-0 opening group defeat to Belgium.

Finland face Russia in Group B at Euro 2020

Good afternoon all and welcome to the Independent’s live coverage of Finland vs Russia. The second group stage games start here and it’s Group B which takes centre stage in St Petersburg first of all.

The pressure is really on Russia to deliver in this game if they want a last-16 berth; having been hammered by Belgium in the opener they must take a positive result this time around, against a Finland side who made their own history last time out by taking three points against Denmark.

That game was of course overshadowed by the collapse of Christian Eriksen, but with the Danish playmaker posting positive updates of late, the focus will now be on who can emerge through a tightly-contested group.

A point here for Finland would probably secure passage for them to the last 16, as one of the four best third-placed teams at worst – it’s possible to go through with three points, so four would surely have them celebrating reaching the knock-out phase at the first time of asking in a major men’s international tournament.