England drilling six goals past the opposition in an opening World Cup match would usually have supporters up on their feet, but nearly half of the crowd inside the fan park here spent the majority of the demolition of Iran sitting down.

In contrast to the scenes in BoxParks across London, where beer is regularly thrown in the air after an England goal, it all felt rather flat.

The 40,000-capacity bowl in Al Bidda Park was nowhere near full and lacking in atmosphere. It did not help that there were several security checks just to get into the park itself.

Once inside, it was evident this was going to be an underwhelming match experience. There was little singing, other than a sporadic chorus of ‘England, England’ and ‘Iran, Iran’.

It is hard to know how many of the England fans inside had travelled from the UK, but the number of people supporting the Three Lions was small. There were more Wales fans present ahead of their game later in the evening but when it came to the early kick-off they, unsurprisingly, were supporting Iran.

The lengthy stoppage involving goalkeeper Alireza Beiranvand did little to help ignite a party atmosphere and even three goals in quick succession could only raise muted celebrations from the small group of England fans.

The crowd’s lack of enthusiasm was summed up when the half-time announcer was met with silence when he asked what the score was.

Though alcohol is available to buy, few people were drinking. In fact, there were bigger queues at the Coca-Cola station than the beer stalls. And while beer is not needed to create an atmosphere, the whole occasion felt rather soulless. The positive was that the lack of drinking meant there was no hint of any crowd trouble. 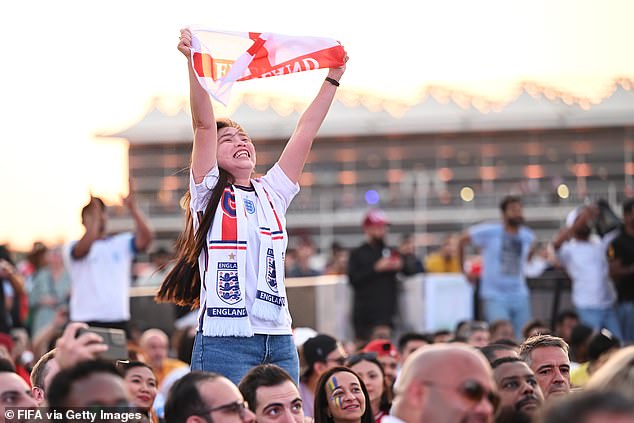 Marcus Rashford’s goal brought the biggest cheer of the night but you’d have probably heard more raucous behaviour on Henman Hill during Wimbledon.

However, not everyone may be looking for atmosphere and the fan park is perfect for those who prefer a calmer setting to watch a match.

Excitement may increase as the tournament progresses and games involving Qatar or countries such as Argentina and Brazil, who are well represented here, may garner more interest.

But despite Monday’s goal-fest, this did not feel very much like a ‘festival’.

Related posts:
Previous Post: So are Djokovic and Nadal supermen or is new generation just weak?
Next Post: Gareth Bale happy to step up when Wales needed him with penalty in USA draw