Manchester United legend Rio Ferdinand wants Mason Greenwood to have a rivalry with Arsenal starlet Gabriel Martinelli. Both Greenwood and Martinelli have enjoyed breakthrough seasons for their respective clubs. United academy graduate Greenwood has scored 12 goals in all competitions, whereas summer-signing Martinelli has netted 10 times for the Gunners.

Ferdinand is a big fan of the 18-year-olds and named them both in his top-five under-21 players in the Premier League.

The former defender predicts a big future for the duo and wants them to have a rivalry similar to the one United legend Ruud van Nistelrooy and Arsenal great Thierry Henry had in the early 2000s.

Ferdinand revealed how Van Nistelrooy would be disappointed after a United victory if Henry had outscored him that weekend in the race for the Golden Boot.

“[Greenwood] and Martinelli are going to score a lot of goals man in their careers,” Ferdinand said on Instagram Live.

“And I’d like to see that rivalry grow, do you know what I mean? You’ve had all these rivalries over the years, great players need great rivalries.

“I’m not saying these are great yet but they’ve got great potential and they need rivalries.

“They should be looking at each other, ‘How many goals has he got? Oh Greenwood’s scored this week’.

“Listen, Ruud van Nistelrooy used to come in the changing room, trust me, after a game, we’re trying to win the league and we come in, we’ve beaten someone 3 or 4-1, he’s scored one goal, come in, looks up to the TV, [sighs], sits down – ‘Ruud, you alright? What’s wrong?’.

“And then someone would go ‘Thierry scored two today and Ruud only scored one so obviously he’s like a goal behind now’.

“He’s sitting there devastated and I used to sit there and think ‘This guy’s made, we’ve just won 3 or 4-1, he’s scored a banger, set someone up as well, but he’s disappointed’.

“That’s the drive you want, that’s the determination, that’s the single-mindedness you need if you want to be at the top.

“I just hope these two young boys, the two forwards I mentioned, have got that, that they want to outdo someone else. You need that man. 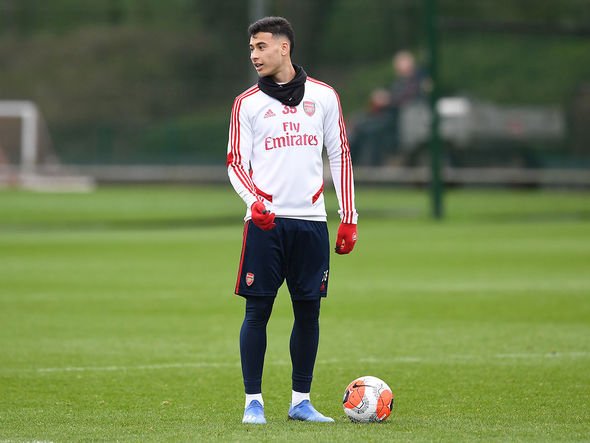 “That’s what I hope Mason Greenwood and Martinelli and people like that start doing.”

Ferdinand has predicted a big future for Martinelli in particular.

“He is a proper player, I think he’s going to be a major player in world football in years to come,” he added.