Supporters that want owners out of their clubs should protest outside stadiums and refuse to attend matches, says a former financial advisor at Manchester United and part of the Red Knights’ bid to buy the club from the Glazers in 2010.

A number of protests aimed at applying pressure on club owners have taken place in the wake of the failed European Super League, which saw the Premier League’s ‘big six’ attempt to join a breakaway league.

Arsenal supporters protested against the club’s owners, the Kroenke family, last month, while Sunday’s game between Manchester United and Liverpool was postponed after fans that oppose the Glazer family’s ownership of United broke into Old Trafford.

Keith Harris, who was a financial advisor at United and part of the Red Knights’ bid to buy the club from the Glazers in 2010, believes the best way to apply pressure on unpopular owners is for fans to stop buying tickets and leave stadiums empty – once coronavirus restrictions allow them to return.

“If the fans are aggressively keen to get a change of ownership, first of all they have to appeal to the loss of reputation that clubs have had,” said Harris, who has helped broker takeovers of Chelsea, Manchester City, Newcastle and West Ham.

“I begged the Manchester United fans not to wear their yellow and green scarves during the days of the Red Knights inside the ground – wear the scarves outside the ground, protest.

“Don’t show the owners that, at the end of the day, you’re more keen on watching your football for a season or two than you are standing outside. Don’t pay to go in.”

As well as opposing the club’s plan to join the Super League, United supporters have also been protesting against the way the Glazers bankrolled their purchase of the club in 2005.

Harris – who is a vocal critic of the US owners and was against their takeover – explained: “If a very wealthy party owns a football club and they use their own money, they are risking their own money. What they’re not doing is borrowing vast sums of money and, as we all know, debts have to be repaid. 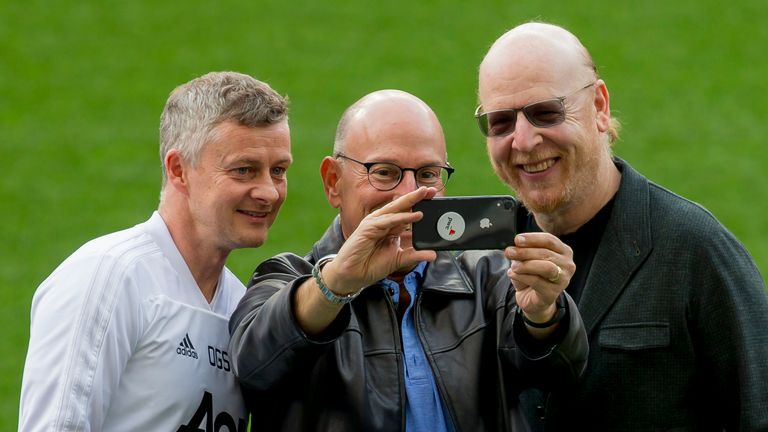 “The money that the Glazers used, first of all to buy the club, was not their money predominantly – it was money that they borrowed. They then borrowed more money and that money was very expensive.

“Because largely of one individual in the manager’s job [Sir Alex Ferguson] and the teams he built, they were very successful on the field.

“But as we know, no football club is successful forever. And when it goes wrong, with debts of the order they have, it’s very risky, it’s very dangerous.

“They’ve milked every last penny out of this club. OK, the club has made money, but the club could have done a great deal better.

“That’s what’s so distressing and that’s what you saw amongst the fans. It’s that tension that’s built up, the emotion that’s strong and suddenly that boil burst.”

A joint statement released by a number of United fan groups last month accused the Glazers of costing the club “£2bn in interest payments, dividends, debt, directors fees, debt repayments and share sales”, adding “the message is very simple – you are not welcome in Manchester”.

United released their second quarter accounts for the current financial year in March, which showed that the club’s debt had risen to £455.5m.

Gary Neville, who spent his entire professional career at Old Trafford, labelled the Glazers “scavengers” and said they should be “booted out” of the club following their decision to sign United up for the Super League.

Can anyone buy the Glazers out of Man Utd?

“The question of who can afford to buy Manchester United opens up questions about the identity of such a person or persons, and where the necessary funds come from. You’d have to say the shortlist would consist of oligarchs, sheikhs and billionaires. Whether they would want to buy United, however, is a different matter.

“Let’s say someone decides to buy Manchester United for £3bn or £4bn, there are then a lot of issues that will soak up cash as well. Do you throw money into the black hole which is Old Trafford and make it into a 21st-century stadium by redeveloping it, or much like Tottenham, do you look at the land around the ground and build a new stadium next to it? Either of those is going to cost money.

“I think the Glazers are looking at what costs less, what can they get away with. As businessmen, I guess they are natural in doing that.

“Then you look at the playing staff, Manchester United want the best players but, this summer, they cannot afford the best players. They might get one great player in, but fans want three or four stellar players and that costs money. It’s all very well saying ‘who can afford to buy the club’ but it’s then a matter of who can afford taking it to the level Manchester United fans are demanding.

“Such is the environment at the moment, if someone comes in and buys Manchester United and things don’t go well and carries on in the same fashion as the Glazers, then these problems will be repeated again and again.

“Manchester United fans won’t like me saying it, but maybe it’s better the devil you know. They know how the Glazers behave, what they are about, and you just have to get on with it, but I’m not sure many people would agree with me.”