Volunteers that pledge their allegiance to clubs in these areas sacrificed their Bank Holiday weekend to ensure that every bit of equipment reached those that desperately need it on the frontline.

While this vital contribution was being made, the West Midlands Police and Crime Commissioner suggested that the safety of his force during Covid-19 could be placed at risk by supporters gathering at stadiums if football returned.

David Jamieson, in position since 2014, asked: “What happens if thousands of fans turn up outside a ground where a crucial game is taking place?

“How could the police enforce social distancing under those conditions? How could they keep rival groups of fans apart? Why should the safety of my officers be put at risk by looking after large groups of fans?”

The police chief in charge of football in England, Mark Roberts, aired the same concern as he discussed the Premier League season resuming. A key proponent of neutral venues being used under ‘Project Restart,’ he queried: “Does anyone seriously think that you wouldn’t get a significant number of supporters turning up outside the ground? We need to be realistic.

“It would happen and there’s no point letting it and then complaining when a lot more people get ill. We have to reduce the threat.”

This kind of rhetoric is not alien to football fans, who have long been framed as a problem to defuse rather than part of society. There has been no evidence to suggest supporters would disobey social distancing rules in large swathes if the top flight were to resume, yet it is constantly promoted as fact.

There is no basis for filtering fans from the wider community, yet they continue to be presented as some kind of separate evil.

As Owen West, a recently retired chief executive who does not agree with the need for neutral venues, tweeted: “Many football fans may have died of coronavirus. Many will have lost family and friends to it.

“Many will be NHS/key workers themselves. Fans don’t need “stark reminders” of Covid-19, they are part of society like everyone else. See it everyday, they (we) are not ‘other.’”

While the PPE visors were being unloaded outside St James’ Park, it was revealed that they would be distributed across local care homes on advice from Dr Joe Cosgrove – a Newcastle supporter and frontline doctor at Freeman Hospital.

It’s impossible to imagine him flouting social distancing regulations to congregate at the periphery of a ground. 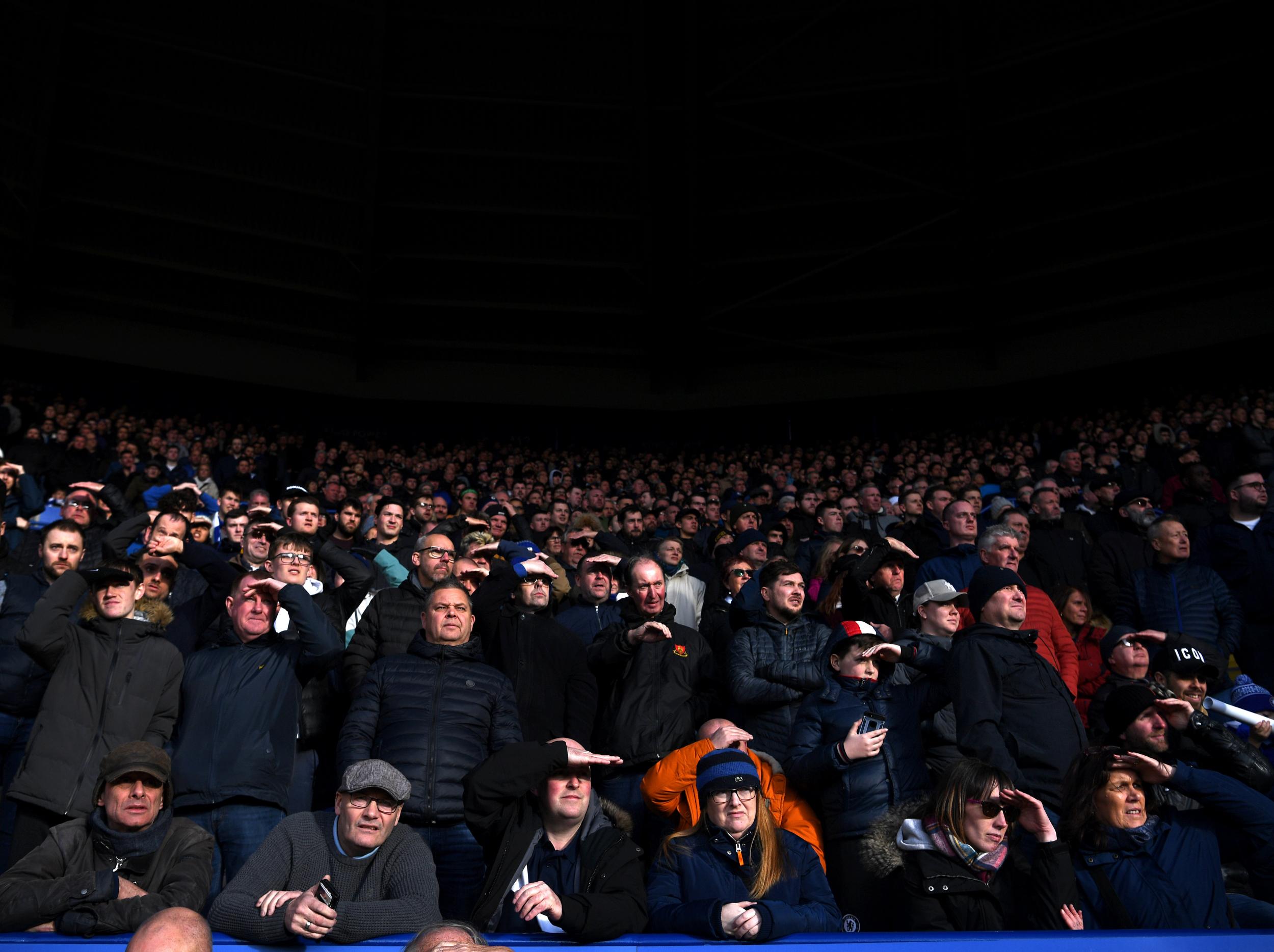 Lizzi Doyle was one of the volunteers that dedicated her weekend to distributing equipment made by the Merseyside PPE Hub. A Liverpool fan, the podcast producer has never seen the club win the league in her lifetime, but she has no desire to camp outside Anfield or any other stadium to celebrate a title triumph under the current climate if the season resumes.

“It’s not a surprise to hear these kind of comments about supporters, but is extremely disappointing,” Doyle told The Independent.

“This question keeps getting asked by broadcasters – ‘what will happen when fans gather outside stadiums?.’

“I don’t know where this rhetoric comes from. There’s no way thousands of people all break this rule to stand outside a stadium while we’re still social distancing.

“It bugs me because it’s just going back to that idea that football fans are animals, they’re hooligans, they can’t be trusted.

“That narrative is dangerous, we’ve seen it time and time again. Why isn’t this being said about rugby or any other sporting code?

“I understand football is the national game and there will be excitement if the season returns. I understand that Liverpool haven’t won the league in 30 years and this is an amazing time for the club, but as we’ve all seen, there’s a much bigger picture at play here.

“We’ve got to work together to beat coronavirus and it’s awful that people presume football fans would be the ones to break this effort.

“I mean, I spent my weekend handing out PPE made by fans to be delivered by other fans across the UK. This is what we do for our communities.” 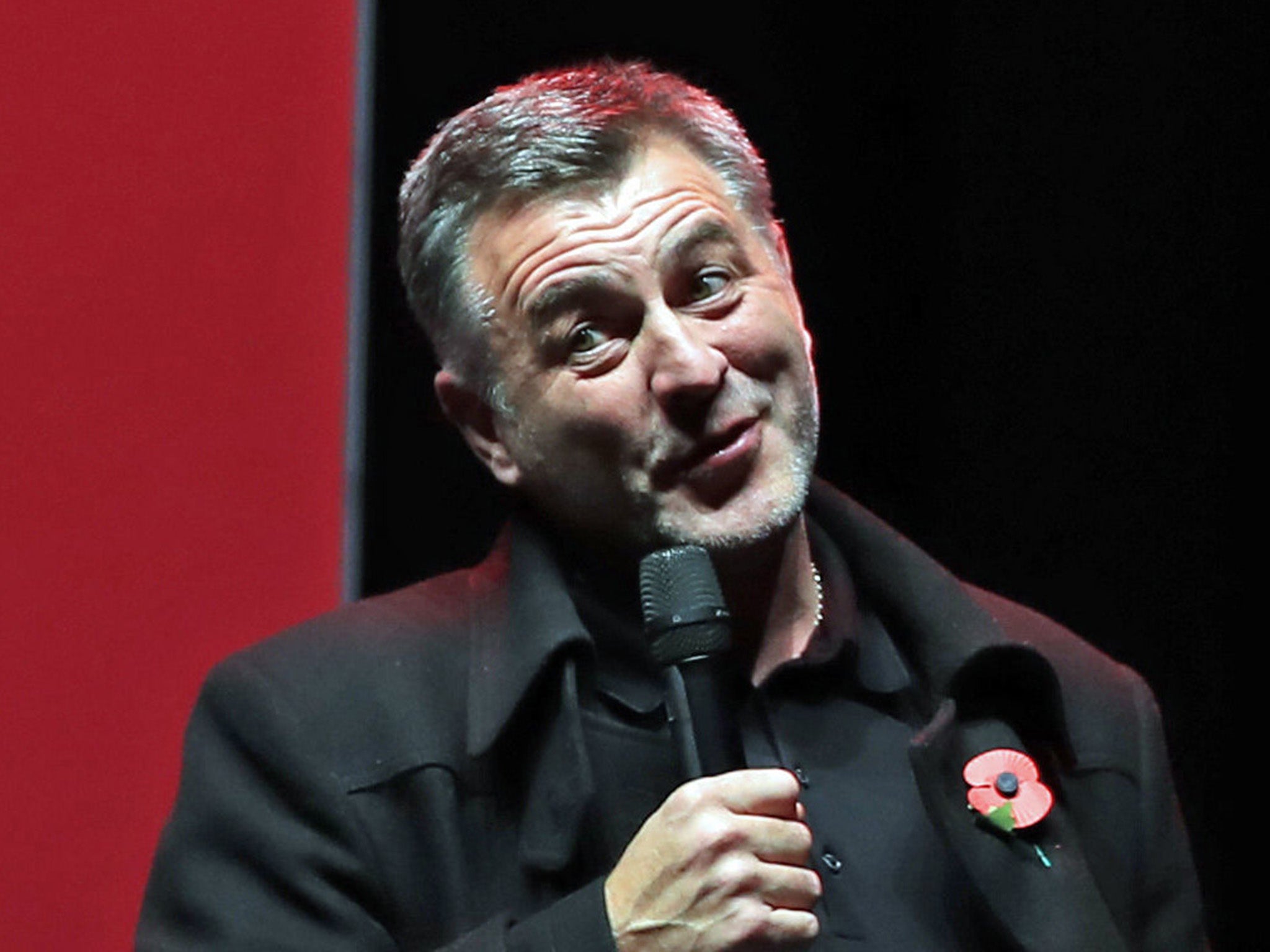 Ian Byrne, Labour MP for West Derby and co-founder of Fans Supporting Foodbanks, has called for a resetting of this portrayal.

“I think the framing of football fans by some parties during this crisis and around issues of restarting our wonderful game is concerning and harks back to past perceptions from another age,”  he told The Independent.

“The football fans and fan groups I am aware of have been at the forefront of inspiring grassroots efforts to help their respective communities get through the Covid-19 crisis.

“The football fans that I work with are volunteers, frontline workers and the very pillars that our communities are built on.

“I believe we need to have a resetting of how football fans are viewed and that the authorities need to engage with, trust and support them. Fans are the most important people in our national game.”

While most clubs have regularly been conversing with supporter groups over football returning behind closed doors when it is safe to do so, the police have not been as active in this regard.

“After all these years, authorities still talking about fans rather than with them.” That was the succinct summation of Martin Cloake, co-chair of the Tottenham Hotspur Supporters’ Trust, with his point echoed by shadow sports minister Alison McGovern.

“The health and safety of players and all staff involved, and wider public health, should be paramount,” she told The Independent.

“Our emergency services are stretched and no one would want to add to that, but I would suggest that engaging with supporters on this is the best way forward.

“Football clubs and fans have shown themselves to be at the heart of UK civil society given their response to Covid-19.

“They have made protective equipment, distributed food to those being sheltered and kept in touch with supporters who need them – for example people with dementia.

“Like many sports, football is about togetherness, not just brilliance on the pitch and that is what we have seen.”

During Monday’s Premier League shareholders’ meeting, the body’s chief executive, Richard Masters, revealed there would be a petition for government to allow home and away games for the rest of the season as usual. 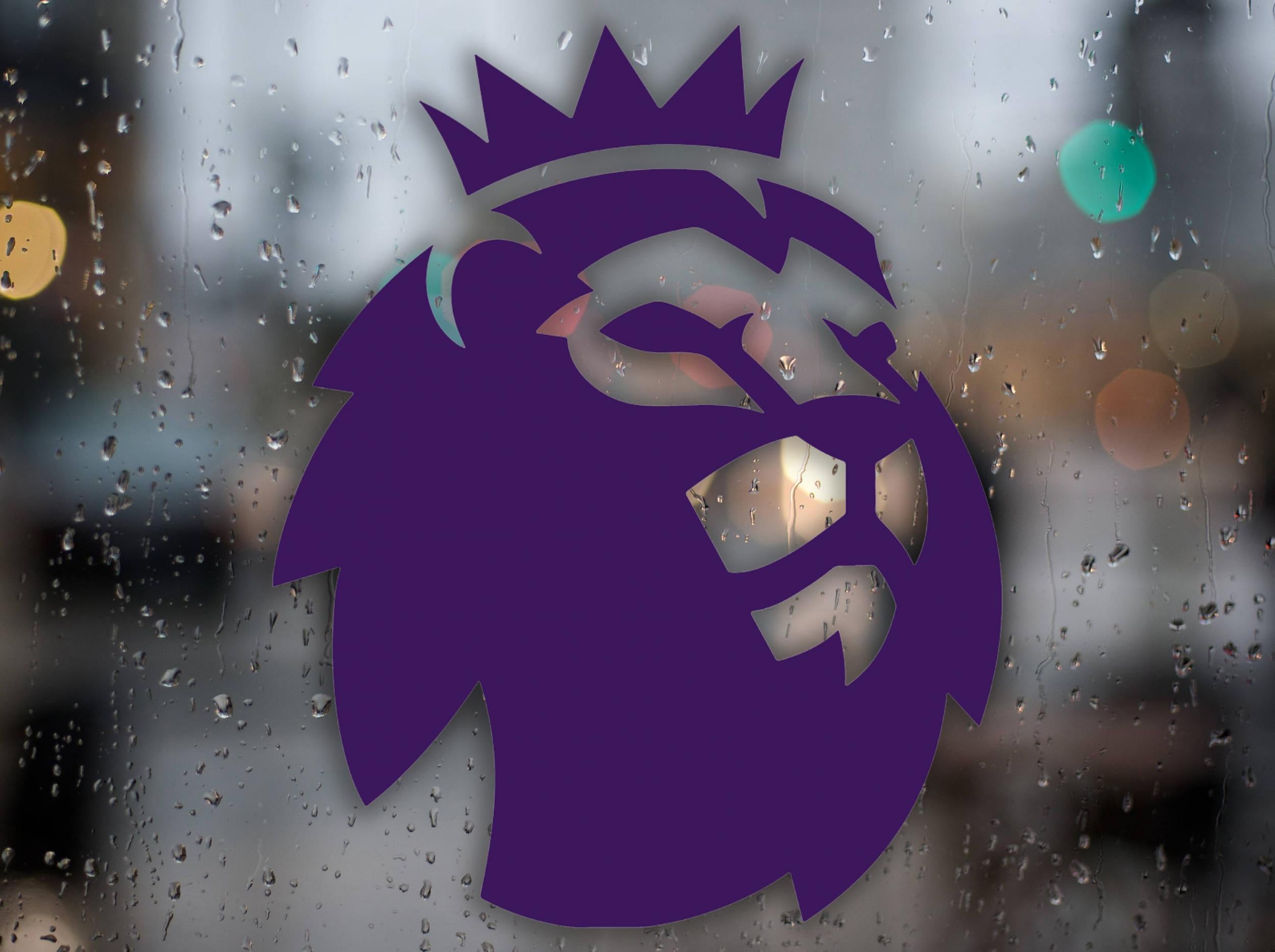 The concept of neutral venues, considered necessary by Roberts in his capacity in charge of football policing in the country, was based in part on the need to curtail fans gathering outside grounds in large numbers.

The sight Paris St-Germain fans converging around the perimeter of Parc des Princes on 11 March for their Champions League tie against Borussia Dortmund, which was played behind closed doors, is often referenced as the example of what could happen in the Premier League.

This is an erroneous view, given the match occurred six days before France banned public gatherings of more than 100 people. The pandemic and measures to overcome it has been much more pronounced since then.

“I don’t think we can apply what happened at the PSG match to what is likely to occur should matches be held behind closed doors in the UK,” Geoff Pearson, a Senior Lecturer at Manchester University and researcher on policing and football crowds told The Independent. 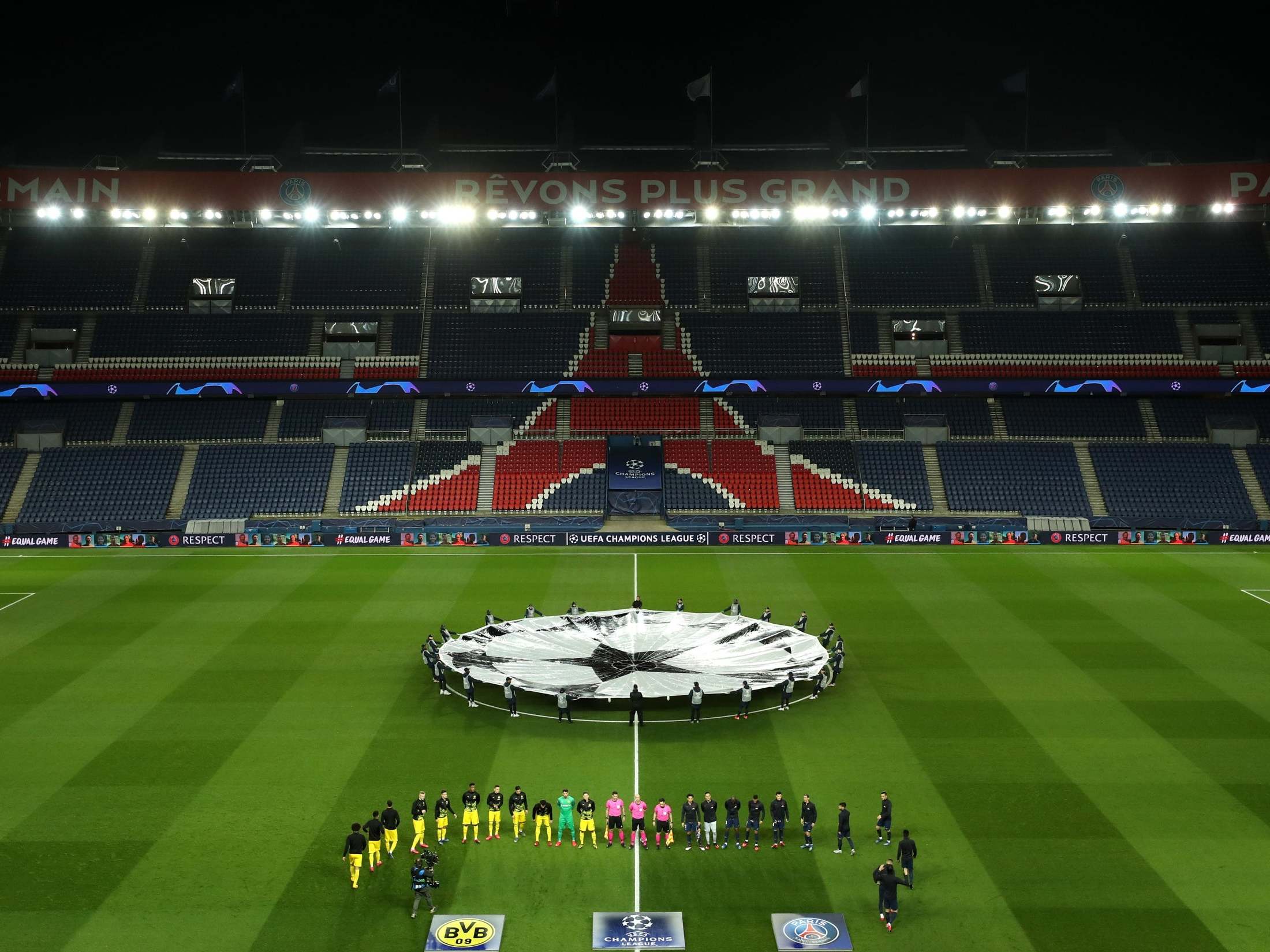 “There are simply too many variables. The situation at the time of the PSG game was very different in terms of our knowledge about how dangerous Covid-19 can be and the French laws at the time were much less strict than the regulations prohibiting gatherings that are currently in force here.

“Further, there are very significant differences between the situation in Paris and the UK. There has been quite serious disorder in Paris, which has not been replicated here, largely due to differences in policing styles.

“We must also may attention to the differences in fan behaviour between the countries. British fans have always been less interested in large scale gatherings away from stadiums than European clubs with active and organised ‘ultra’ groups.”

Pearson, an expert in supporter habits around matches, does not subscribe to the notion that there would automatically be crowds around grounds when football resumes.

“Generally I would not expect fans to want to gather outside of stadiums to chant support for their team, particularly not if matches can be watched on television,” he said.

“The dominant English supporter match-going ‘culture’ is very much based on watching the football and, if possible, drinking.

“Gathering outside stadia, usually in alcohol-free zones, for the vast majority of matches would be a very clear break from the typical behaviours associated with football fandom in this country.

“The situation may be a bit different when it comes to matches which could result in a league title or a promotion. Here, there is the possibility that fans might gather in numbers outside the home stadium or in the town or city centre, although I would expect this to be more in terms of a post-victory celebration rather than to try and cheer the team on – particularly if the match is televised.

“But a lot will depend on what the Health Protection Regulations look like when (and if) matches are resumed.

“If public gatherings are still prohibited then although there is a risk of some fans looking to gather to celebrate a title or a promotion, I would expect the vast majority of supporters to continue to obey the regulations. There has been a very high level of compliance with the restrictions to date, including from football fans.”

He also dismisses the “highly unlikely” scenario of an audience building outside if neutral stadiums are used.

“We might see this type of gathering organised by some ultra groups in other countries, but this type of transgression is just not an accepted part of English football culture,” Pearson notes.

“The situation would be different if the pubs around those local grounds were open, or if there were fan zones, but that won’t be the case.

“I would expect that if a team won a title or a promotion at a neutral venue then those fans would be wanting to gather together with friends and family to watch the match and celebrate at home.

“There may be garden parties or street parties, and if restrictions on gatherings are lifted then I would expect larger gatherings around the home stadium or city centre.”

Germany’s top two divisions are resuming matches this weekend in their own stadiums with La Liga planning to do the same in June. Premier League clubs will engage with their local authorities and police forces to work out how that could be feasible here.

They should spotlight how unfair the painting of supporters has been, while promoting their contributions to helping communities navigate the crisis.