Everton ace Mason Holgate insists he wants to get out of Merseyside when Liverpool finally clinch the title – despite the possibility of it being decided next week in the derby next Monday. Liverpool are nine points from the title after the win over Bournemouth but it could come sooner should Manchester City slip up again.

City face Manchester United, Arsenal and Burnley all before the Merseyside derby, and two defeats from those three would hand Liverpool the chance to seal it against Everton.

But Holgate wants to be away from the celebrations if possible.

“I’ll be a long way from Liverpool, yes, I think so,” he said. “To be honest, I don’t think I want to be anywhere near that!

“But they have done well, there is nothing you can say about that. If they win it, they will have deserved to win the title.

“They are doing well and there is nothing we can do about that. Obviously we play them next week and we look forward to that type of game.

“But what they are doing is nothing to do with us. It won’t affect us.

When can Liverpool win the Premier League title? 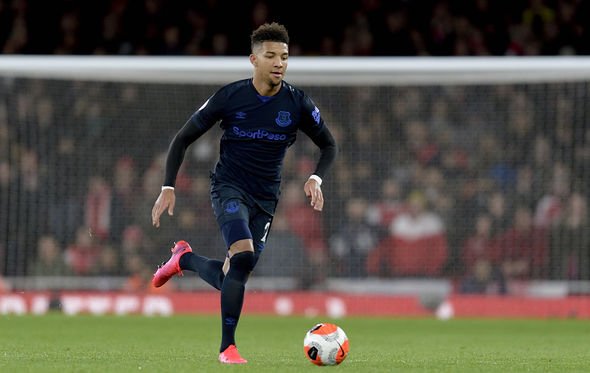 “Obviously the rivalry is important when we play them but when we are not playing them, we just have to concentrate on ourselves.”

Liverpool had to overcome a scare against Bournemouth yesterday after Callum Wilson opened the scoring thanks to a controversial VAR incident.

But Mohamed Salah and Sadio Mane scored the goals to turn things around and put Liverpool on course for the title.

Liverpool could even be champions before playing again if City were to lose all three fixtures this week.

But Klopp insists he is not thinking of that and still wants to take each game as it comes.

Everton meanwhile have improved under Carlo Ancelotti and Holgate has impressed enough to get a new deal at the club.

He has even been name checked in relation to an England call but needs to make a decision on his Jamaican heritage.

“My grandma and grandad are Jamaican, so it would be nice for that side of the family,” he added.

“But I don’t think my mum and dad would speak to me again if I turned England down!

“I couldn’t turn England down. I’m from Yorkshire, I’m from Doncaster!

“So I don’t think I’ve got much of a choice. I’m English, I’ve come through the Under 20 and 21 age-groups, I’ve always been an England fan, supporting them at World Cups and Euros.

“So as much as I would love to do that for my grandma and grandad and they would be proud of me, I see myself as English and it’s England who I want to play for.

“At the moment, though, it’s not at the forefront of my mind. I’m only concentrating on my games for Everton.

“When the time comes to makes those decisions, I will make them. But it’s my performances here that will dictate what happens at international level.

“Now, it’s about trying to win games for Everton and push for Europe. The time will inevitably come when I need to make the decision and that’s when I’ll do it.

“But it’s something I can’t really affect, I can only do what I can for Everton and see if it leads to a call-up. If so, I’ll be the happiest man in the world.

“If it doesn’t I’ll know I’ve done everything possible for Everton and there’s not much more I can do about it. Ultimately, it’s not my decision, it’s Gareth Southgate’s to make.”