The Rafa Benitez era at Goodison Park began with an impressive comeback win after second half goals from Richarlison, Abdoulaye Doucoure and Dominic Calvert-Lewin cancelled out a debut strike from £15million Saints signing Adam Armstrong.

Armstrong capitalised on a mistake by Michael Keane to fire the visitors ahead at half-time but Richarlison – who won an Olympic gold medal with Brazil just a week ago – levelled after 47 minutes having earlier been booked for diving.

Doucoure smashed Everton into the lead after 76 minutes before Calvert-Lewin added a third. It was the first time Benitez had won his opening Premier League game having failed to do so with Liverpool, Chelsea and Newcastle. 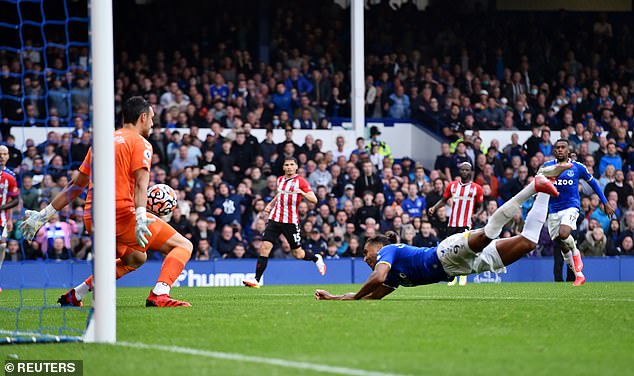 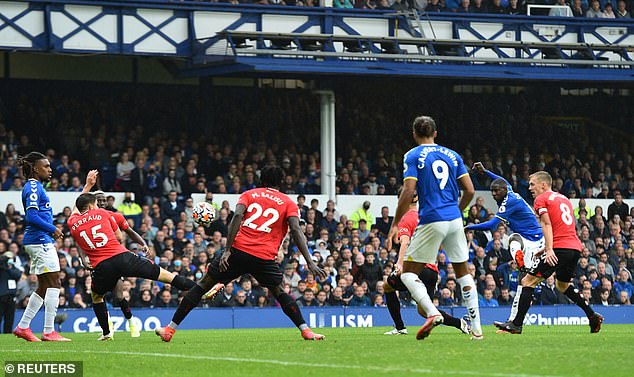 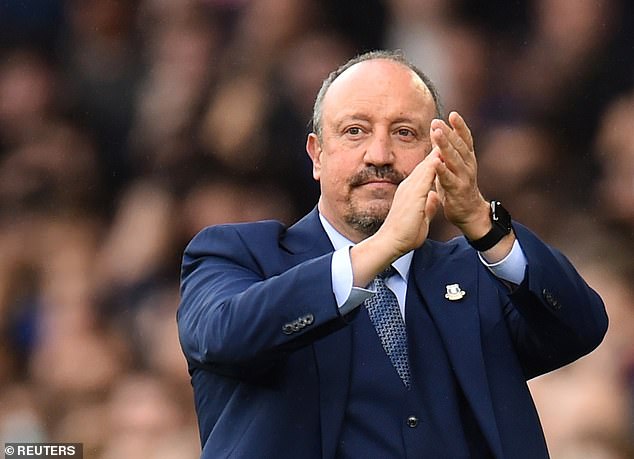 The Spaniard wore a dark blue suit as he received a warm ovation from Evertonians before kick off.

Though the former Liverpool manager was without a number of players including James Rodriguez, Ben Godrey and Andre Gomes who are understood to be isolating, he was able to pair Richarlison with Calvert-Lewin who had missed pre-season with a foot injury. 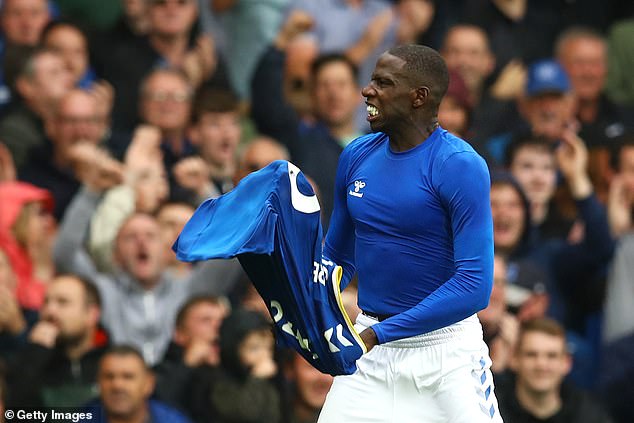 Doucoure is delighted as he celebrates his goal, which put his team in the ascendancy 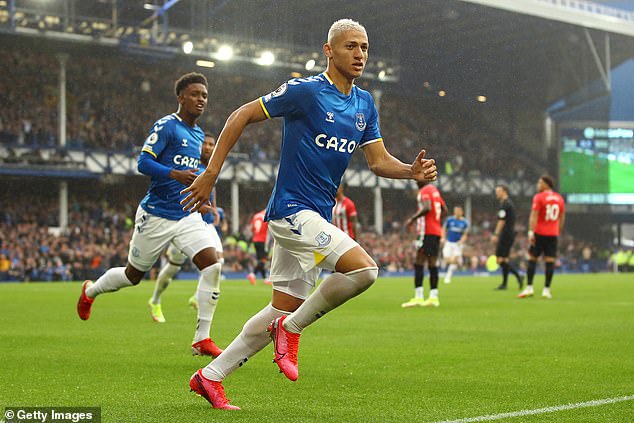 Richarlison, back from helping Brazil at the Olympics, celebrates his equaliser for Everton 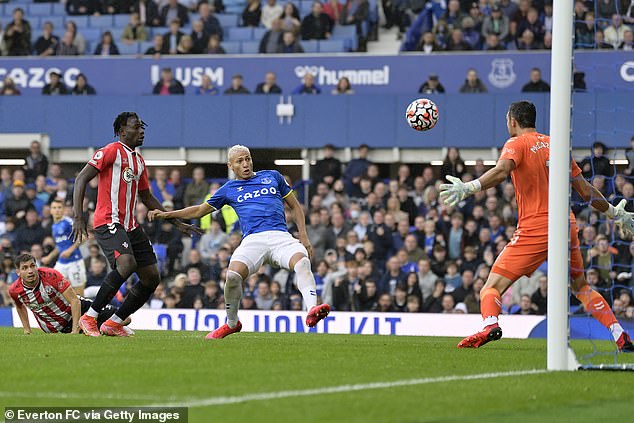 Goodison was bouncing as the teams walked out to the traditional fanfare of Z cars and Everton took the early initiative with Allan denied by Alex McCarthy and Calvert-Lewin just inches away from connecting with a Richarlison cross.

Saints have lost key men Danny Ings and Jannick Vestegaard in this window but took the lead against the run of play after 22 minutes.

Everton defender Michael Keane dwelt on the ball deep inside his own half and was robbed by Che Adams, who nudged into the path of Armstrong.

The striker scored 29 times for Blackburn last season and showed plenty of confidence as he advanced on Jordan Pickford and bent a finish into the top corner.

Everton’s desperation seemed to induce Richarlison into trying to win a penalty after half-an-hour. Not only did Mr Madley wave away the claims, he also booked the South Amerrican.

Armstrong then tested Pickford with a snapshot towards the near post but when Richarlison escaped a second yellow shortly before half-time with a late fould, he made Saints pay.

After 47 minutes, Lucas Digne’s corner was headed back towards goal by Andros Townsend and the peroxide Richarlison judged the flight of the ball and stuck out a boot to divert past McCarthy from close range.

At 1-1, both sides must have feared the worst given Everton had been beaten nine times at Goodison last season and Southampton had lost 10 of 11 away games.

But it was the home side who took the lead for the first time after 76 minutes. 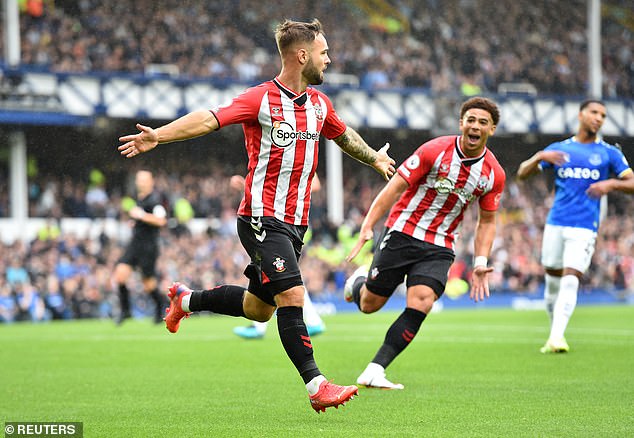 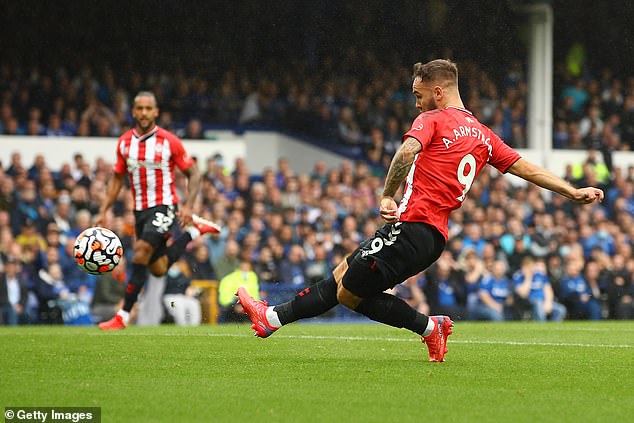 The striker, who joined Southampton from Blackburn, showed good composure to finish 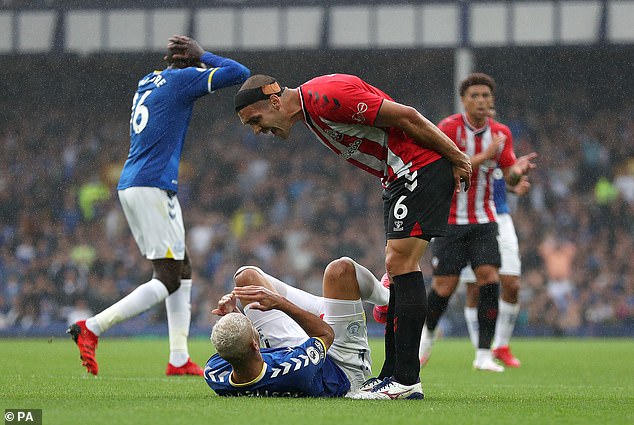 Substitute Alex Iwobi fed Doucoure and the Frenchman showed tremendous grace for a six-footer as he swivelled on the edge of the box and fired past McCarthy with a terrific strike.

Calvert-Lewin put the icing on the cake with nine minutes left when Iwobi and Richarlison combined and he powered in from close range with a trademark diving header.