Europa League draw: West Ham get struggling Ligue 1 giants Lyon as Barcelona are paired with Frankfurt and Rangers take on Braga… and it could be ‘Eel Clasico’ in the semi-finals if the Hammers get through!

West Ham have been drawn against Lyon in the Europa League quarter-finals, while Rangers will take on Braga and Barcelona face German outfit Eintracht Frankfurt.

The remaining last-eight clash will see an enticing match-up between Bundesliga side RB Leipzig and Serie A outfit Atalanta.

West Ham could meet Barcelona in a mouthwatering semi-final should the pair prevail in their respective quarter-finals, while a victory for Rangers will see them come up against either Leipzig or Atalanta. 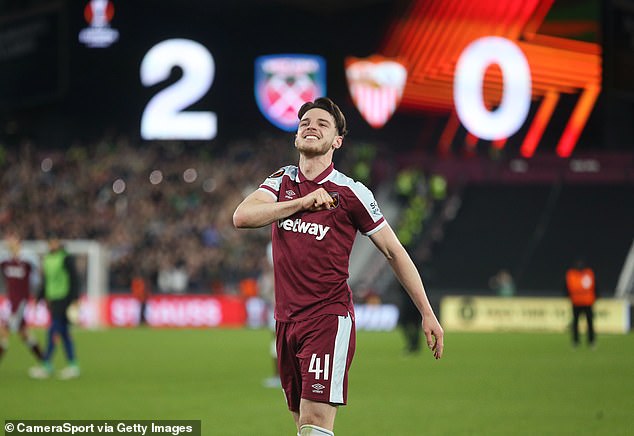 The Hammers secured their place in Friday’s draw with a historic victory over Europa League specialists Sevilla on Thursday, with the Spanish giants travelling to the London Stadium holding a 1-0 advantage.

The game was taken to extra time thanks to a first-half Tomas Soucek strike, before Andriy Yarmolenko sealed a 2-0 victory and a place in the quarter-finals – the first time the London club have ever reached this stage of the competition.

West Ham will welcome their Ligue 1 counterparts – who saw off the challenge of Porto to reach the last-eight – to London for the first leg on April 7, with the return tie a week later on April 14.

David Moyes’ side missed a number of the big-hitters remaining in the tournament, with the French side currently sat 10th in Ligue 1 and heading into the clash as the underdogs.

They most likely won’t be so fortunate come the semi-finals, which take place on April 28 and May 5, however, with Barcelona the overwhelming favourites to prevail against Eintracht Frankfurt, who sit ninth in the Bundesliga.

The German outfit are the only team remaining in the competition to have won it before, however. 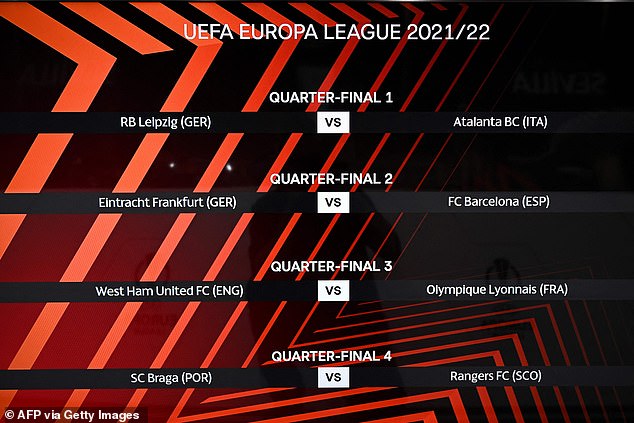 Rangers meanwhile have the advantage of a second-leg home tie against Portuguese side Braga, who currently sit fourth in the Primeira Liga.

Giovanni Van Bronckhorst’s Rangers side sealed a 4-2 aggregate win over Red Star Belgrade on Thursday, despite falling to a 2-1 away defeat last night, to seal their place in the last-eight.

Braga finished second in the group stages – behind Red Star Belgrade – before seeing off Sheriff Tiraspol on penalties in the round of 32 and Monaco in the last-16.

The Scottish side avoided the likes of West Ham and Barcelona, but should they emerge victorious they are guaranteed an almighty challenge against one of Leipzig or Atalanta.

The first legs of the quarter-finals will take place on April 7 while the second legs are a week later on April 14.

The final will then take place on May 18, with Sevilla’s Ramon Sanchez-Pizjuan Stadium hosting the action.

The first legs will be played on April 7, with the second legs on April 14.

May 18 at the Ramon Sanchez-Pizjuan Stadium in Seville