In years to come, the tapestry of this tournament will burst with flashes of emotion and genius.

Think Patrik Schick’s 50-yarder against Scotland, or Andreas Christensen’s rocket on another poignant night in Copenhagen.

No doubt magicians such as Kylian Mbappe still have the odd rabbit to pull out of their chapeau, too.

For me, though, the abiding memories of this summer will take some shifting.

Already we have enjoyed two throwbacks to football’s agricultural roots, two goalmouth scrambles that belong in the mud and tumble of Sunday League.

One was so glorious it even made the BBC’s highlights package.

That came in the final minutes of England’s clash with Scotland. As the hosts pushed for a winner at Wembley, Declan Rice fed Reece James on the right and his low ball into the area caused utter carnage. Five seconds felt like five minutes before John McGinn fittingly cleared the ball with a big ol’ hoof. 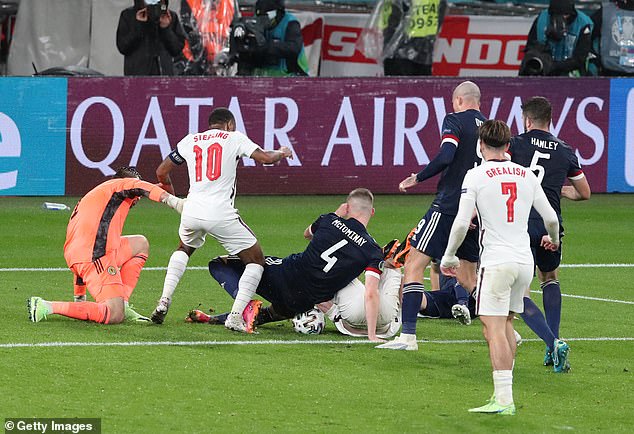 Until then, none of Rice, Grant Hanley, Stuart Armstrong, David Marshall, Scott McTominay, Lyndon Dykes or Raheem Sterling could put their foot on it.

Instead we ended up with McTominay and Rice on the floor, ball wedged between them, while Armstrong took his own tumble and everyone else hovered around the ball, petrified about giving away a penalty.

The 115th meeting between the Auld Enemies ended with ‘a good old fashioned stramash,’ as co-commentator James McFadden put it. And in truth, the wet conditions only added to the buffoonery. 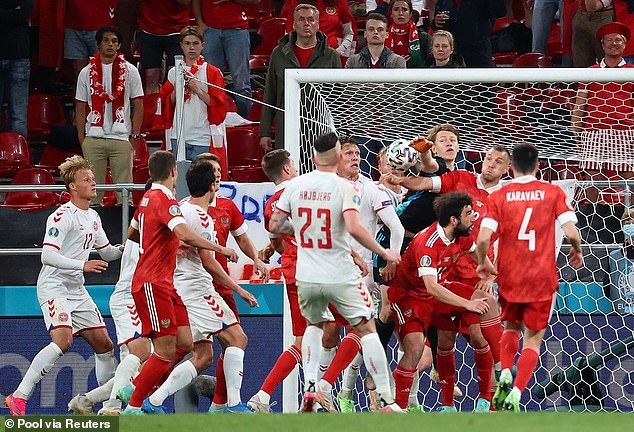 Then, in Monday’s clash between Russia and Denmark, another good old ding-dong.

As Denmark lined up a corner, 15 players gathered inside the six-yard box. One of the edge, the other 14 along the goal line – including several big lads and 28 left feet.

Russia keeper Matvey Safonov fluffed two attempts to punch it – the first coming off Simon Kjaer and back into the air, the second rolling along the goalkeeper’s arm into a crowd of bodies. Safonov dived into the firing line, where Kjaer’s flick was blocked and then Jannik Vestergaard fluffed two stabs at goal.

By now a Russian outfield player had dropped on to the line, primed in full goalkeeper pose. But then Christiansen spooned his effort into Russia’s one-man wall, giant captain Artem Dzyuba and it was eventually cleared. Still, what fun we had. 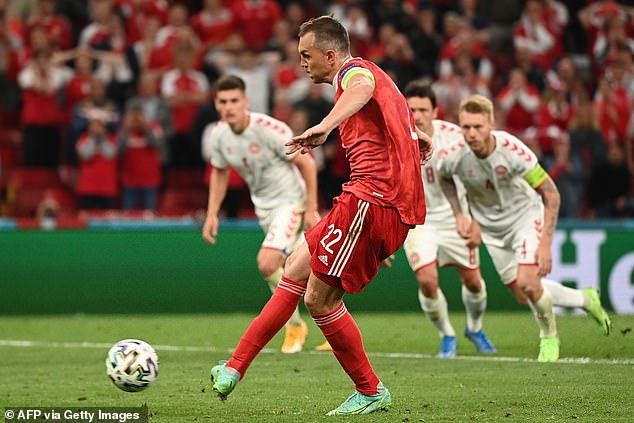 So far, this final round of group games has been an absolute delight, precisely because of the shambles that is ‘qualification’ for the last-16.

Every team in Groups A, C and D have had hopes of going through before kick-off. The only dead-rubber was North Macedonia vs Holland.

Elsewhere, it’s been perilous for permutation-heads trying to stay on top of things.

The chaos reached its zenith during Denmark-Russia and Finland-Belgium, when news of Belgium scoring sparked Danish celebrations, only for the goal to then be chalked off by VAR after Russia had been awarded a penalty.

For a while the BBC seemingly thought Russia were heading through… even while they sat bottom of the group.

Related posts:
Previous Post: Denmark and Czechs sweat over stifling Baku heat for quarter-final
Next Post: Mourinho singles out Man Utd’s Shaw as one of England’s strugglers vs Scotland