Tottenham defender Eric Dier sprinted into the stands at the Tottenham Hotspur Stadium to confront a supporter in the aftermath of Spurs’ FA Cup exit at the hands of Premier League strugglers Norwich.

Unable to beat the Canaries after 120 minutes, drawing 1-1, Spurs were taken to penalties but ended up being dumped out 3-2 on spot-kicks after Tim Krul’s heroics.

Dier scored his effort from 12 yards but Troy Parrott had his attempt saved before Erik Lamela hit the crossbar, with the decisive penalty from Gedson Fernandes kept out by Krul.

And shortly after full time, Dier jumped into the lower section of the West Stand and hurdled rows of seats to seemingly confront a single supporter.

Footage of the incident that circulated on social media picked up the player saying in the middle of a huddle of people: “He’s my brother, he’s my brother.” 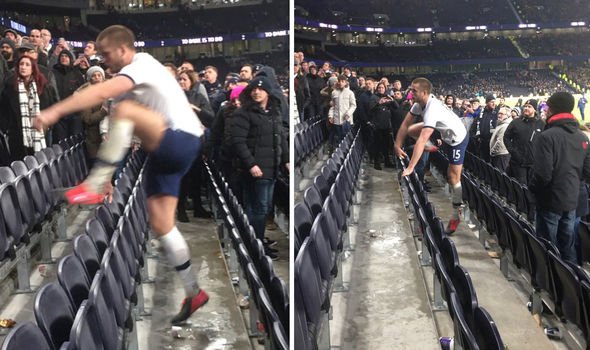 It was suggested that Dier may have been leaping to defence of on-loan midfielder Fernandes after he missed the final spot-kick.

But Spurs boss Jose Mourinho said of the incident soon afterwards: “I think Eric did what we as professionals cannot do but when someone insults you and your family is involved, especially your younger brother.

“This person insulted Eric, the younger brother was not happy with the situation and Eric was not happy. But we as professionals cannot do what he did.

“If the club discipline Eric Dier I would not agree with it, but what he did was wrong.

“The people that are in these privileged positions by the tunnel.

“Of course some are Tottenham fans but I think a lot of corporate, a lot of invitation, a lot of people with special status and probably it’s the place of the stadium where I sometimes have doubts over if they are the real Tottenham fans because these [real fans] are the ones who support the boys until the last.

“This person insulted Eric, this family was there. The young brother was not happy with the situation and then Eric, I repeat did what we professionals cannot do, but did something that probably we would do.”

Asked about allegations of racial abuse towards Fernandes, Mourinho added: “I cannot say, I don’t know. 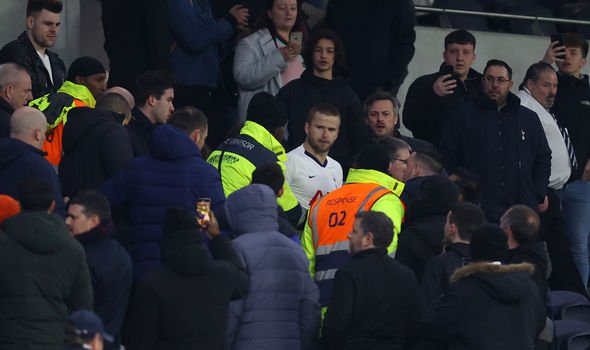 “I just know that the reaction of Eric was based on his brother, didn’t like what was happening there. I cannot go in that direction with these details.”

One eyewitness said on Twitter: “Someone was giving Eric Dier stick. Dier jumped in the stand, the bloke ran away and Dier literally chased him up to row 20 and down the gangway. Never seen anything like it.”

The 26-year-old, visibly irate, was eventually escorted away by security as the stadium emptied.

The evening had initially kicked off in fine style for the hosts when Jan Vertonghen fired the hosts into an early lead, climbing to meet Giovani Lo Celso’s cross and head home in the 13th minute.

The game turned on its head in the 78th minute, however, as Michel Vorm gifted Josip Drmic an easy tap-in to level the scores and send the tie to extra-time.

A further 30 minutes passed without note before Spurs buckled in the shoot-out as Norwich sealed an FA Cup quarter-final spot for the first time since 1992. 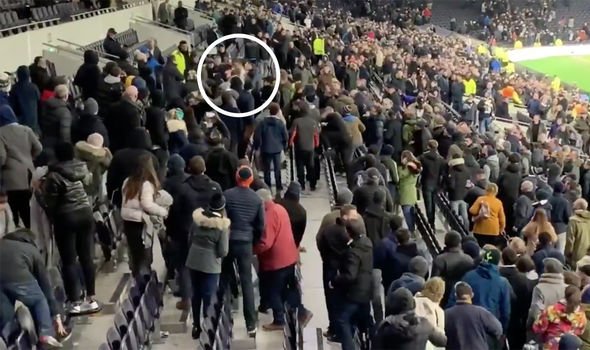 Tim Krul proved to be Spurs’ nemesis as he pulled off a couple of terrific stops from Troy Parrott and Gedson Fernandes in the shoot-out.

Norwich will hope the win sparks fresh hope in their battle to avoid relegation from the Premier League and, speaking after the emotional win, Krul said: “That’s what it’s all about, that’s why we do the work.

“When you have down times, this is what you think of. As a little boy you want to save penalties and get your club through. Big emotions today.

“Everyone says I am good at penalties so I knew I’d better start saving some. Me and my coach do our homework, I had them on my bottle, it all happens in a shootout. What a place to do it as well and for 9,000 fans to be here on a Wednesday night.

“Incredible. Maybe this is the turning point, we believe we can stay up.”