The good folk of Middlesbrough did their best once they realised what was happening and drowned out the booing with applause but the damage was already done. The saboteurs inside the Riverside Stadium had made their feelings all too clear on England’s players taking the knee.

They don’t care for it and they don’t mind who knows.

Gareth Southgate was generous enough to put the booing down to a lack of understanding about what kneeling is about but England’s black players involved in Wednesday night’s game must have listened with sinking hearts.

The apologists who frame their actions as legitimate opposition to the political wing of the Black Lives Matter movement are playing games.

Football has regularly made it clear that taking the knee has nothing to do with any organisation, nor is it some nonsensical conspiracy to elevate the value of a black life above that of a white life. The gesture is simply about highlighting racial injustice in the hope a train will be set in motion to bring about an end to it.

Those who boo either do not recognise that such injustice exists or do recognise it and believe it should continue.

Football – and England football in particular – has been a gathering point for some of the detritus in the past. Much work has been done by the FA, the police and supporters’ groups to weed out the rogue elements but it would be naïve to claim they do not still exist.

Southgate is meeting with his players to talk over whether to continue taking the knee ahead of England’s next game on Sunday against Romania which is also at the Riverside.

The instinctive reaction is that England should carry on and not let the boo boys win. To give up would be to give in. But we live in a free country and there are clearly a proportion of the football-going population happy to use that freedom to make their unsavoury point. 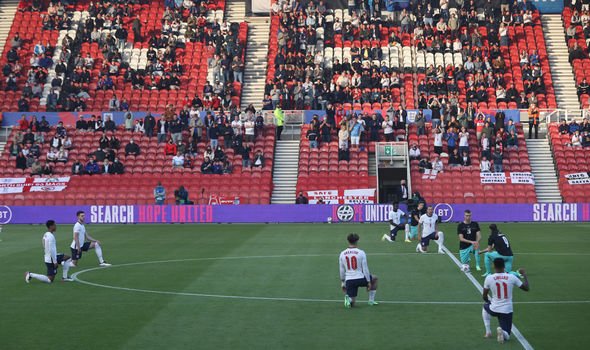 There was booing at the Champions League final from the Chelsea end last week and it was not directed at Ilkay Gundogan for the false start. Equally, there have been problems at Millwall, Cambridge United and Exeter.

As a friendly, the game against Austria had little projection globally but what happens if the same thing happens during England’s Euros’ matches when millions are watching across the globe? What sort of image will that send out about our nation?

Taking the knee has been happening at the top level of English football for a year now. Perhaps this is the moment to retire it. Individual players like Wilfried Zaha and individual clubs like Brentford have already done so.

The power that accompanied the unifying sight of players and match officials acting together has ebbed away over time. If its sole point now is as a rallying point for the racists, then it has no purpose at all. 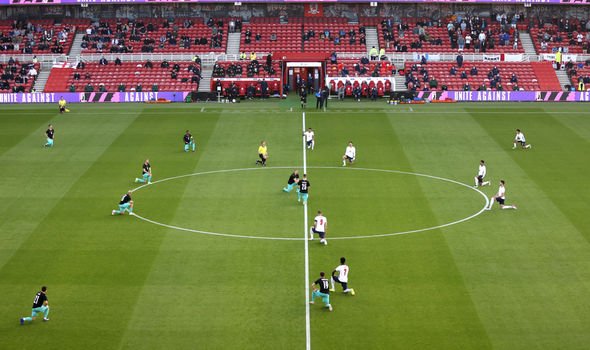 If England want to convey an image of inclusivity at the Euros that will carry without risk of national embarrassment, they need to freshen up the message.

Premiership leaders Bristol Bears stood together in a heart-shaped formation when rugby union returned. It looked good but would be a choreography challenge for a team still mastering 4-2-3-1.

Maybe the answer is simply a circle.

Some might still boo of course but should you be reduced to catcalling a circle, there really is nowhere left to go.