Arsenal are reportedly targeting Norwich City playmaker Emi Buendia as Mikel Arteta plans an extensive rebuild at the Emirates after a disastrous full campaign in charge. The Gunners have missed out on European football entirely for the first time in 25 years after a dismal Premier League campaign and the Europa League semi-final exit to Villarreal.

Arteta has been under pressure but will be tasked with reshaping his squad this summer.

And one player who has reportedly been identified to fill a creative hole is Norwich’s midfielder Buendia.

Buendia was the standout player of the season for the Canaries, which was validated by winning the Championship player of the year award last month.

JUST IN: Chelsea and Borussia Dortmund in ‘regular contact’ with four players on the table

Football.london report that Arsenal will make a move for Buendia this summer should an attempt to sign loanee Martin Odegaard fall through.

Odegaard’s potential transfer is complicated by the fact Arsenal don’t have the persuasion of European football and Buendia could be a more attainable target.

Supporters are always excited to see what shirt numbers new players could wear and it would be particularly interesting to see Buendia’s pick.

The 24-year-old has worn no.17 during his three years at Norwich, and wore the same number during his time at Cultural Leonesa.

Arsenal’s current no.17 is Cedric Soares, though the right-back has been out of favour under Arteta.

Soares could be one of the players jettisoned by Arteta, but if he remains and Buendia stays, the midfielder may request the Portuguese international to vacate his shirt number. 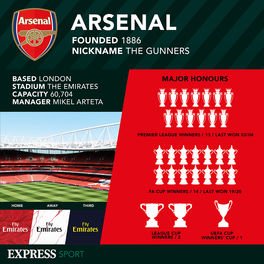 However, Norwich are reluctant to sell one of their star man as they plot their Premier League return.

Boss Farke said it would take an ‘unbelievable amount of money’ to prize Buendia from Carrow Road.

“Of course if one of the best clubs in the world wants Emi as a starter and makes an unbelievable offer then it could be a realistic solution for all parties,” Farke said last month.

“But Emi is a key player and it is always our task to make sure that we keep the key players.

“It is due to the great work of Stuart Webber we have them under long term contracts.

“That means if a club wants them they have to invest an unbelievable amount of money.

“If there is a club who want to put some crazy offers out then maybe you use this to help the club in the future, but as a head coach my first thought is to work further on with our key players.”