Prospective Newcastle boss Eddie Howe was among the crowd at Brighton on Saturday evening as the Magpies edged closer to making an appointment.

The 43-year-old was pictured sitting next to Amanda Staveley, whose consortium bought out Mike Ashley last month, in the stands at the Amex Stadium during the Premier League clash between the two sides.

Newcastle are understood to have agreed a deal in principle with the former Bournemouth manager to take over at St James’ Park, more than two weeks after head coach Steve Bruce’s exit.

Prospective Newcastle manager Eddie Howe (second from right, bottom row) was pictured in the crowd at the club’s away match against Brighton at the Amex Stadium on Saturday night 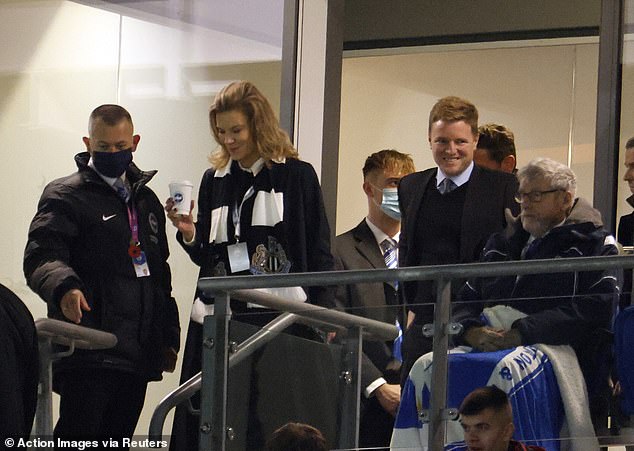 He sat next to Amanda Staveley, whose consortium bought out Mike Ashley in October

His was one of two names on a whittled-down shortlist, along with that of Villarreal’s Unai Emery, drawn up following a lengthy process.

After initial soundings, the Spaniard was approached, but rejected the opportunity to head for Tyneside.

That prompted the new owners to open formal talks with Howe, who has been out of the game since leaving the Cherries following their relegation from the top flight at the end of the 2019-20 season. 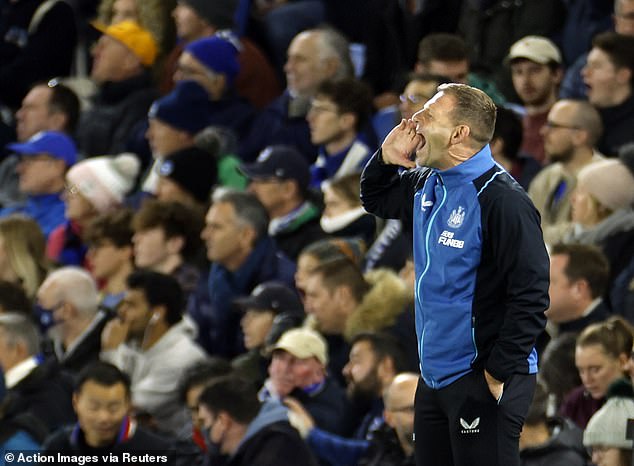 The Magpies kicked off at Brighton sitting at the foot of the table as a result of Norwich’s 2-1 win at Brentford.

Graeme Jones, a coach under previous boss Steve Bruce, was in temporary charge for the clash with the Seagulls, but is expected to make way for Howe in the near future.

However, it is believed Howe will retain Jones as a member of the coaching staff.