The son of Atletico Madrid manager Diego Simeone has dropped a hint that Cristiano Ronaldo could join the La Liga giants during the summer transfer window.

The 37-year-old sent shockwaves through the footballing world when he requested a transfer away from Erik ten Hag’s Manchester United side earlier this summer.

Ronaldo hasn’t received as much interest as he had hoped for but he could be destined for a move to the Wanda Metropolitano after Simeone’s son liked a Tweet claiming he returning to Madrid. 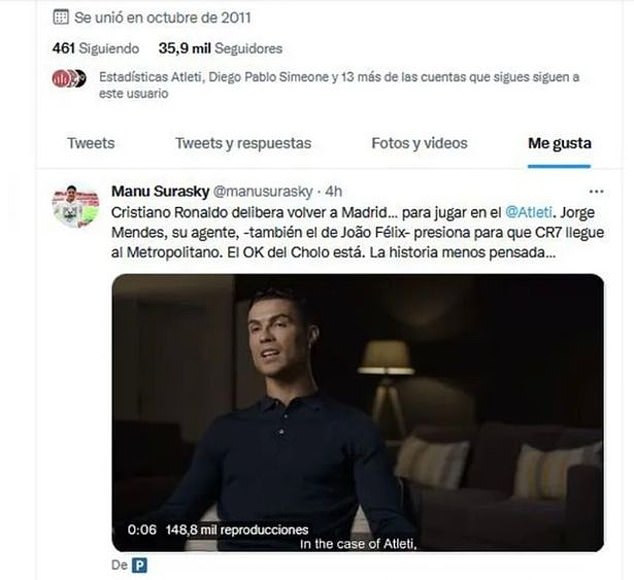 Simeone’s son liked a tweet from journalist Manu Surasky that read: ‘Cristiano Ronaldo decides to return to Madrid… to play for Atleti. Jorge Mendes, his agent, presses for CR7 to reach the Metropolitan.’

It could be a good move for the striker, as he is looking for a club that has secured Champions League football for next season.

Ronaldo is currently the highest goal scorer in the history of the competition with 140, but his rival Lionel Messi sits close behind on 125.

If the Portugal star was to stay at United, who will not play in the Champions League this season after finishing sixth in the Premier League, Messi would have a half-chance of surpassing his record.

Despite his advancing years, Ronaldo showed last season he is still an effective forward. He scored 24 goals in 38 games for United across all competitions.

If Ronaldo does get the move he has been hoping for, it may leave the Red Devils lacking attacking depth as they head into next season.