Inter Miami put in a solid performance against LAFC on Sunday night at the Banc of California Stadium.

Playing in their first MLS game having joined the league this year, they put in a good display away at last year’s Western Conference winners.

The game was a tight affair throughout, and Vela’s sublime lob in the first-half was the difference.

The Mexican winger cut in from the right-hand-side, beating three men before lofting the ball above Luis Robles.

The goal came just before half-time, with Vela launching onto a header from Diego Rossi.

Vela controlled with his chest to knock the ball between two defenders, before dummying past another.

He then shimmied his way past a fourth to get the ball onto his favoured left foot, before delicately chipping from outside the area.

It was his third goal in the space of just four days, after he found the net twice in LAFC’s 3-0 win over Leon on Thursday night.

Inter Miami will face DC United next weekend in their second MLS game, before their first home tie the following week against LA Galaxy.

The team – owned by Beckham – has a new 18,000-seater stadium and is still yet to sign a marquee-name.

And after the game, he took to Instagram to send a message of support to his players and fans.

“Very proud moment for our club today and the team did us proud,” he wrote. 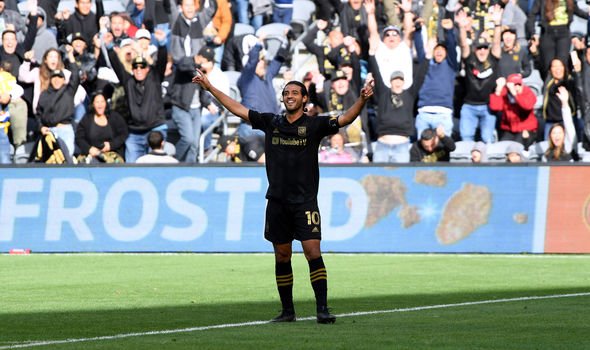 “It’s been a long journey but this is only the beginning.

“To Diego (The Boss) the team and our entire staff at @intermiamicf we should be very proud how far we have come and what the future holds.