Report and free match highlights as Wilfried Zaha nets a seventh goal against Brighton, the most he has scored against one opponent; Lewis Dunk sent off in added time for a reckless tackle on Gary Cahill

Alexis Mac Allister’s superb 90th-minute strike rescued a deserved draw for 10-man Brighton as they drew 1-1 with Crystal Palace in the M23 derby.

Graham Potter’s side were dominant in possession (65.6 per cent) and shots (20), but it was Crystal Palace who took the lead with their only shot of the game.

Wilfried Zaha (19) slotted home from the penalty spot – his seventh goal against Brighton, the most he has scored versus one opponent – after Tariq Lamptey was penalised for a foul on Michy Batshuayi, although replays suggested there was minimal contact.

Brighton had a string of chances to level things up and looked to be heading for a third successive Premier League defeat until Mac Allister powered a sensational effort home from the edge of the area on the stroke of 90 minutes. However, their afternoon ended on a sour note when Lewis Dunk was sent off in the fourth of seven added minutes for a two-footed challenge on Gary Cahill.

The visitors were able to see the game out for a much-deserved point, but the result does keep them in 16th place. Crystal Palace, meanwhile, move up one place into 12th.

How Brighton battled back for a deserved point

Brighton made a good start at Selhurst Park and had a few chances fall their way. After a superb solo run from Solly March, he found Lamptey on the right of the area but he snatched at the ball and it was blocked by the Palace defence.

After a bit of a scuffle between Christian Benteke and Dan Burn before a Brighton corner, March’s delivery was punched away by Vicente Guaita before Yves Bissouma hammered an effort into the side of the net. Not long after, Ben White dragged a shot just wide of the far post.

1 – Since Opta began recording full shot data for the Premier League in 2003-04, Crystal Palace are the first team to have just one shot in a match in the competition and that shot be a penalty. Toothless. pic.twitter.com/5gGhUoMaaf

But it was Crystal Palace who were handed an advantage in the 17th minute. In their first real attack of the game, Lamptey was penalised for a foul on Batshuayi inside the area as Andros Townsend whipped in a cross from the right. However, there appeared to be very little contact with the Palace striker stumbling over rather than being pulled. Zaha stepped up to fire home from the penalty spot with the Eagles’ only shot of the opening 45 minutes.

From then, the rest of the first half was a much more even affair but with little goalmouth action. The best chance came just before the half-hour mark and it was Brighton again who saw an effort wasted. Lamptey’s right-wing cross was sent back into the area by March on the opposite flank, but Neal Maupay was unable to direct his header on target, sending the ball flying into the empty Holmesdale End.

Man of the match: Neal Maupay.

The second half was much livelier and Maupay went close again inside four minutes. It was a superb switch of play from Brighton as March fired a cross in from the left flank with Adam Lallana leaving it for the striker. He took a touch before turning past Cahill and shooting, but Guaita was there to make the save.

Palace had the ball in the net for a second time not long after, but Batshuayi’s thunderous effort was ruled out for offside. It was a sensational throughball from Jairo Riedwald to send the Belgian striker through and it was an emphatic finish, but the flag was raised. VAR checked the decision and Batshuayi was just leaning offside as the ball was played.

Maupay was again causing issues as he darted into the area, dinking past Cheikhou Kouyate before Cahill and Joel Ward both threw themselves in front of his shot which flew well wide of the target.

Brighton continued to dominate and see the better of the attacking play, and they finally snatched a deserved equaliser right on the 90-minute mark. Maupay played the ball across the top of the area, with Aaron Connolly leaving it for Mac Allister and he rifled a thunderous effort into the bottom corner for his first Premier League goal. But the Seagulls ended the game with 10 men as captain Dunk was dismissed with just a few minutes to play. Brighton delivered a corner but as Dunk tried to slot the ball home, he instead caught the legs of Cahill with a two-footed, tired challenge and it was a straight red card.

Man of the match – Neal Maupay 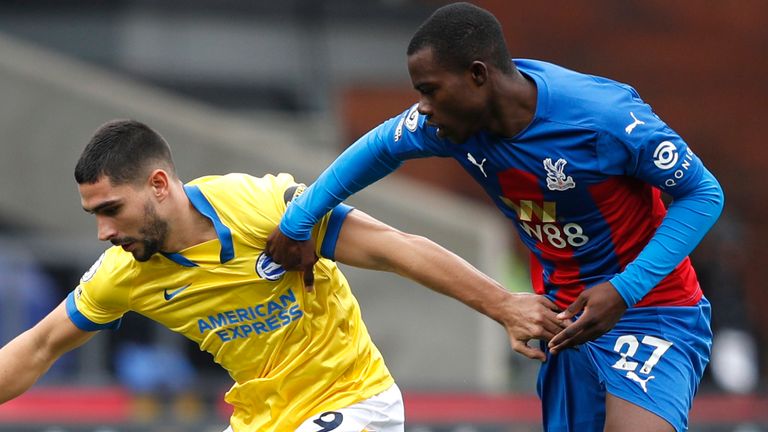 There were plenty of good performances across the board from Brighton, but Maupay was at the forefront of the attacking action. He had three superb chances to score, a team-high of six shots overall and helped set up Mac Allister’s equaliser with his flashed ball across the top of the area.

Lallana also showed his growing influence for Brighton, while Lamptey impressed again at right wing-back, but it was Maupay’s eagerness up front that just edged it.

It is a short trip for Crystal Palace next weekend when they take on Fulham in the Premier League on Saturday (kick-off 3pm). Brighton host West Brom on Monday Night Football, live on Sky Sports (kick-off 5.30pm).