Premier League clubs are paying for the families of football personnel who have been infected with coronavirus to be tested.

Clubs have told players and staff who have returned to work for Project Restart that they will finance all relevant Covid-19 tests for loved ones with whom they have been in contact.

Private testing can cost in the region of £300 per person — but some clubs will foot the bill.

Clubs who have offered to pay for such tests have done so on their own accord and not part of the Premier League protocol. As it stands, clubs are testing up to 50 players and staff twice a week.

During the opening four rounds of tests, the Premier League confirmed 12 positive readings from 3,882 swabs.

It is hoped the club-led initiative will help give players and staff peace of mind. Clubs have also administered blood and antibody tests to staff, players and family members to determine if some have been infected with Covid-19 but recovered. 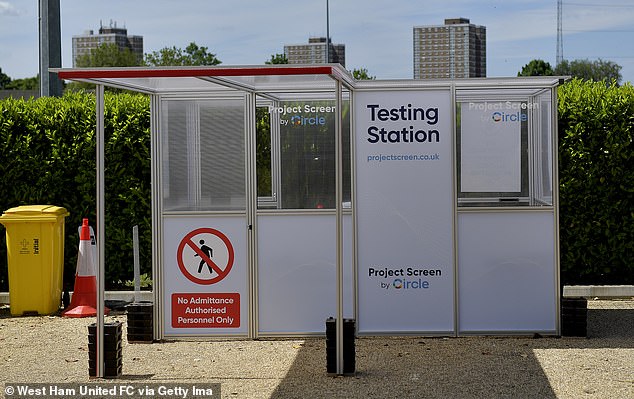 During the four rounds of tests, the league confirmed 12 positive readings from 3,882 swabs

Players in the EFL have sought clarification from their clubs as to whether their families are entitled to tests.

The Football League have told players they will not provide extra tests for families but advise them to ‘discuss their individual circumstances with their clubs’.

In response to questions, the League wrote: ‘Where the EFL receives requests from clubs for additional tests we will see if we can assist but no assurances can be given as our focus has to remain on delivering tests to players and other club staff necessary to fulfil fixtures.’