Arsenal suffered their worst home defeat since December 2019 on Sunday as Aston Villa proved too strong for the home side.

Captain Pierre-Emerick Aubameyang failed to have a shot on goal in the 90 minutes and the Arsenal’s attack was blunted by Villa’s resolute defence.

And emotions were high after the 3-0 loss with a caller to BBC 5 Live’s 606 phone-in, saying: “Mikel Arteta has to go tonight and we need to use the international break to bring in Max Allegri or Mauricio Pochettino.

“I’ve run out of patience and I think I speak for a lot of Arsenal fans when I say that.”

Allegri and Pochettino are both out of work and made clear they are ready to take charge of a club again.

But in response to the Arsenal fan, Sutton shut down the prospect of Arteta being dismissed.

He said: “You’re going early here. To say that he should go and should be sacked, it’s ridiculous. Where’s your patience?”

Speaking after the Arteta was extremely unimpressed with the performance of his players. 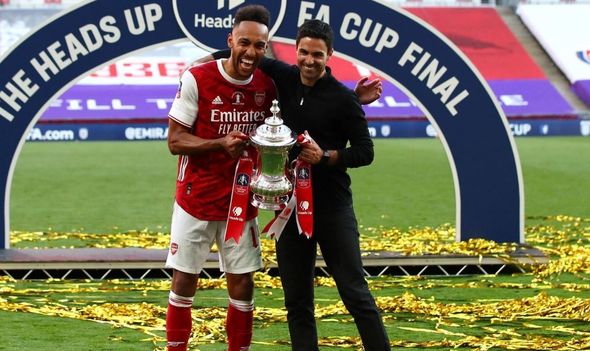 “We expect to win every game and this is the standard that we have to set. So if someone believes that winning one or two games is good enough, they’re completely wrong and I’m not going to accept that.

“I’m not going to accept that mindset at all and it’s obviously not what this club deserves. It’s my full responsibility and now I have to find a way to do it.

“I think that since I arrived here, it’s the first time that I’ve felt that we performed really under our standards and what we are trying to set at this football club. It’s unacceptable.

“I would like to have a game tomorrow morning to get this one out of the system. But as well, in difficult and bad moments, you get a lot of things. I want to see how people react, how players react and if we start to blame each other or if we just look at ourselves in the mirror and then try to become much better than what we’ve shown tonight, which we are.

“Then, after that, get everybody back together and get the fighting spirit, the belief and the commitment that we’ve shown since I got here, into every game.”