As he sat with Mason Mount and Reece James in the centre of the Estadio do Dragao pitch in the aftermath of Chelsea’s Champions League success, Ben Chilwell must have thought he was about to enjoy the best summer of his life.

And yet it proved to be one of disappointment and frustration for the fullback, who has not played a single minute of football since helping Chelsea beat Manchester City in the Champions League final at the end of May.

The 24-year-old is the only Chelsea player to have started the final who is yet to play for the club this season, having also been one of only three outfield players not to make an appearance for England during the European Championship.

Chelsea head coach Thomas Tuchel said: “It has absolutely been difficult for him [Chilwell] and I think it is pretty normal. He came from a Champions League and some crucial games at a high level.

“Then he had a break and it was hard for him to totally relax and get this disappointment off his shoulders, and when he arrived here I felt him mentally tired a bit, still worrying about the situation and at the same time he had to accept it.”

Ben Chilwell played a starring role in Chelsea’s Champions League final win over Manchester City in May, but hasn’t been played a competitive match since.Credit:AP

If ever there was a way to be brought back down to earth with a bump after the Champions League final, it came via Gareth Southgate for Chilwell as he was one of the three players to be left out of the match-day squad for England’s opening game against Croatia.

Chilwell at least made the substitutes’ bench for the Scotland game, but a post-match chat with his Chelsea team-mate Billy Gilmour perhaps sealed his fate for the rest of the tournament as the former Leicester defender and Mason Mount were forced into isolation and missed the Czech Republic match, which Chilwell might well have played in.

It must have been hard to take when, again among the substitutes, Chilwell watched Southgate send Kieran Trippier on to replace Luke Shaw with England four goals up against Ukraine in Rome, rather than giving him a run-out in the quarter-final, and there was no place on the bench for Chilwell for either the semi-final or the final.

Marcos Alonso watched the Euros from his sofa and so it made sense that the Spaniard, with a full pre-season under his belt, would start the campaign ahead of Chilwell, who returned late with the rest of Chelsea’s England contingent. 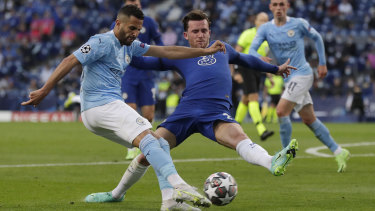 Having scored Chelsea’s first league goal of the season against Crystal Palace, Alonso has started all four games in the club’s unbeaten start and wore the captain’s armband against Aston Villa, with Cesar Azpilicueta and Jorginho starting on the bench, from where Chilwell once again looked on.

“He [Chilwell] was very unlucky at the start of the season because Marcos was here the whole pre-season and every single training session, and he took this opportunity so well with such a huge quality and attitude,” Tuchel said. “We had some talks with Chilly about the situation. It took some time. He is in the race now. He is in good shape with a good attitude, so he can play any minute.”

Chelsea could be forced to travel to red-list South Africa to take part in the Club World Cup after the head of the country’s football association revealed it was interested in taking the event there. A new venue is needed for Fifa’s flagship club competition after Japan withdrew over coronavirus fears and Qatar, the 2022 World Cup host, last week emerged as a leading contender. But it could now face competition from South Africa.