Haunted by the goal that never was: Third-tier Chesterfield were cruelly denied a 1997 FA Cup final date with star-studded Chelsea… 25 years later the Conference leaders finally face the Blues in the competition’s third-round

One Monday back in December, David Seaman dipped his hand into a glass bowl, fished out ball No 61, chortled into a camera and sent an FA Cup flashback through a market town in north-east Derbyshire.

‘Unfinished business,’ smiled Chesterfield chairman Mike Goodwin once the din of being drawn against Chelsea subsided. ‘If David Elleray had given that goal when he should have, that would’ve been 3-1 up with 20 minutes left. I’m sure we’d have gone on to Wembley and played Chelsea in the final.’

At Stamford Bridge on Saturday, comes a third round tie with hidden depth for fans of a club with little to cheer in recent years, nagged by a footballing injustice for a quarter of a century. 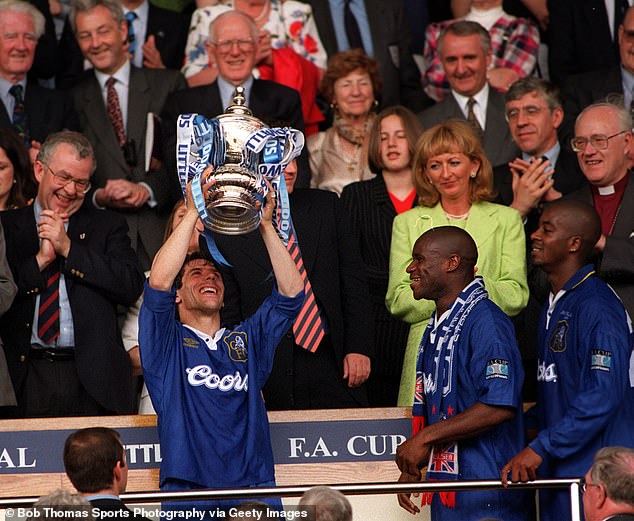 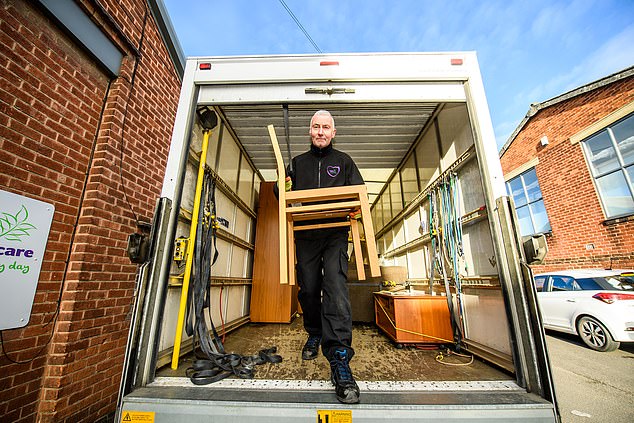 Chesterfield were in the third tier when they reached the semi-finals in 1997, up against Bryan Robson’s Middlesbrough and their Premier League stars, such as Fabrizio Ravanelli, Juninho and Emerson.

It was a daunting prospect, but the Spireites had already beaten top-flight Nottingham Forest and Championship high-flyers Bolton, and manager John Duncan cut through the nerves ahead of the game at Old Trafford.

‘He told everyone to sit down,’ recalls Sean Dyche, Chesterfield’s captain, now boss of Burnley. ‘It all felt a bit serious so we sat down and he said, ‘Lads, you look like you’re s****ing yourselves’. We all stared at him. Then he went, ‘I know I certainly am’.

‘We burst out laughing. I thought it was a moment of magic, a brilliant way to defuse a room full of very nervous lower-league footballers about to play the biggest game of their lives.’

With an hour gone, Chesterfield were 2-0 up thanks to goals from Andy Morris and a Dyche penalty and Boro were down to 10 men with Vladimir Kinder sent off.

Ravanelli pulled one back before the infamous goal that never was. Jon Howard’s shot crashed into the bar and down over the line, a clear goal missed by referee Elleray in an age before goal-line technology, mics, ear-pieces or buzzing wrist watches. 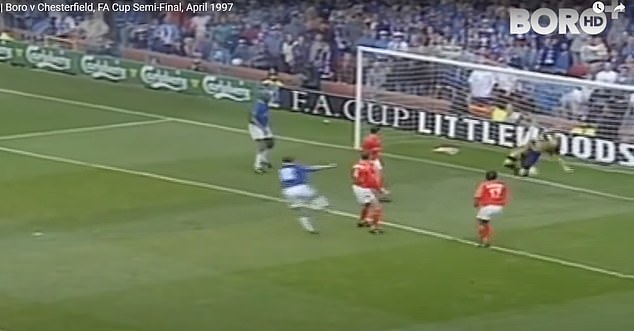 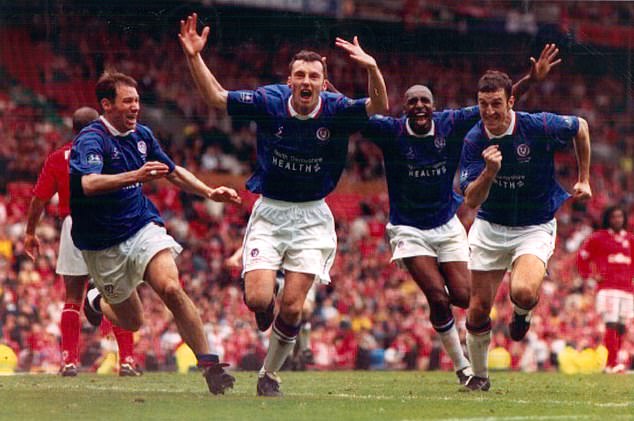 ‘The linesman gave the goal, 100 per cent,’ recalls Jamie Hewitt, Chesterfield legend of more than 500 games. ‘He was running back towards the halfway line as he would if we’d scored but the ref didn’t even look at him.

‘It was poor officiating. The linesman should have had the guts to put his flag up and tell him. David Elleray was a bit arrogant in the way he was towards us. He just dismissed you. You couldn’t really talk to him.’

The incident dominated post-match discussions. Elleray admitted his mistake as soon as he saw the replay, although it did nothing to restore his reputation in Chesterfield.

‘Not only is the ball over the line but there’s a foul on Andy Morris when it bounces out and it had to be a penalty,’ says Dyche. ‘It was a strange twist. I’ve never lost any sleep over it because there’s so many good memories from that time, but part of you does wonder if it might have been different.’

Like Goodwin, who was in the stands that day, Chesterfield’s players still think they could have won it. ‘John would have battened down the hatches,’ says Hewitt. ‘A flat back eight, maybe. That would have been game over.’

As it was, Middlesbrough’s Craig Hignett scored a penalty and Gianluca Festa put them 3-2 up in extra time before Hewitt struck in the final seconds.

‘Chris Beaumont was out wide,’ recalls Hewitt. ‘How he got the cross in from there I’ll never know. It hit the turf, skidded up like a beach ball and I knew I could get my head on it. When I did it felt good, I thought, ‘that’s not far off’. The goalkeeper Ben Roberts was wrong-footed and it looped slowly over him. 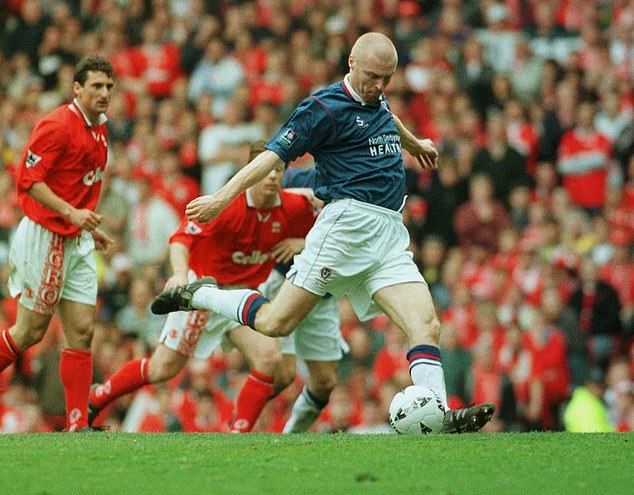 ‘I was born in Chesterfield. I stood on the terraces and watched them with my dad from the age of four or five. I lived and breathed football. To pop up in front of 50,000 at Old Trafford and equalise in the 119th minute of an FA Cup semi-final was like a fairytale. I remember it like it was yesterday.’

Duncan’s players became instant celebrities, mobbed in Stockport after stopping for beer supplies on the way back from Manchester and, on reaching Chesterfield, the main road was teeming with jubilant fans.

‘We didn’t make it back to the ground,’ says Hewitt. ‘The bus came to a halt and we climbed out and went into the pubs with the supporters.’

This was a Sunday night and by 5am on Monday they were locked inside a nearby nightclub, still in their tracksuits. They were playing at Brentford on Tuesday. ‘John Duncan said don’t worry about that, just celebrate this moment,’ says Hewitt.

Later in the week, as fans queued round the block for tickets for the replay at Hillsborough, and Ruud Gullit’s Chelsea waited in the final, some Chesterfield players joined Chris Evans on his TV show TFI Friday while others appeared with Frank Skinner and David Baddiel on Fantasy Football League.

‘It was a mad week or so doing all those things we weren’t used to, we were lapping it up,’ adds Hewitt. ‘In the end, we just ran out of steam. We didn’t pose a threat in the replay.’

The fleeting chance had gone. Middlesbrough won easily at Hillsborough to reach their first FA Cup final, where they were a Roberto Di Matteo goal down in 42 seconds and lost 2-0.

Chesterfield’s players tuned in from Jamaica, an end-of-season treat negotiated with chairman Norton Lea during that journey home from Old Trafford.

‘The time difference meant it kicked off at 9am,’ recalls Hewitt. ‘I was rooming with Tom Curtis and we watched the first half in our room and then descended on the pool bar.

Chesterfield returned to the business of bobbing up and down in the third and fourth tiers for a couple of decades, flirting with crises, before one took hold and successive relegations plunged them into the National League in 2018.

Fans railed against unpopular owners and gates dropped below 3,000 as they came close to relegation into the sixth tier.

Then the club’s Community Trust, chaired by Goodwin, launched a rescue. The pandemic brought delays and financial complications but the takeover was complete by August 2020, by which time the team had not played for months.

‘The pitch was a foot long and had meadow grass growing in it,’ says Goodwin. ‘The people we asked to sort it out wouldn’t come anywhere near until we’d settled some outstanding bills.’

The new regime untangled the mess and revived the club, returning it to the heart of the community, and manager James Rowe has them on course for promotion. More than 8,000 were at the Technique Stadium for last month’s draw with Halifax.

‘There’s a new buzz,’ says 53-year-old Hewitt, who still lives and works in the town, delivering furniture donations to charity shops for a hospice and analysing home games for local radio.

Six thousand fans will make the trip to Chelsea. ‘We could’ve sold 10,000 and asked for more tickets,’ says Goodwin, who estimates the tie will land the club at least £300,000 in revenue.

‘We took 25,000 to Old Trafford in 1997, it emptied the town. It was a fantastic time to be a Spireite. Just seeing that sea of blue-and-white was incredible. Our fans will love this trip to Chelsea just as much.’