Frank Lampard will be looking to get Chelsea’s new campaign off to a flier on the South Coast as he takes his side to Brighton. The Blues boss has made a number of marquee signings this summer and now he has agreed a deal for Rennes goalkeeper Edouard Mendy.

Mendy won’t be signed in time to face the Seagulls and he won’t be the only new addition to miss out.

Ben Chilwell is still nursing a heel problem while Thiago Silva is yet to train with the side.

Hakim Ziyech also misses out through an injury sustained against Brighton in the 1-1 friendly draw.

Kepa Arrizabalaga started that day and played the first half but Express Sport are backing him to be between the sticks on Monday.

JUST IN: Chelsea have Edouard Mendy transfer bid accepted by Rennes with star set for medical

He has endured a tough time but Lampard could give him the chance to stake his claim as No 1 following the arrival of Mendy.

Marcos Alonso should start at left-back in place of Chilwell.

Antonio Rudiger and Kurt Zouma could be at the heart of defence.

Reece James is set to start due to the fact Cesar Azpilicueta is not match fit.

In midfield, Jorginho could be handed a rare start after losing his place in the side last season.

N’Golo Kante will also be in midfield alongside Mason Mount.

It will be the first time Havertz has lined up for his new club while Werner has already found the net on this ground in pre-season. 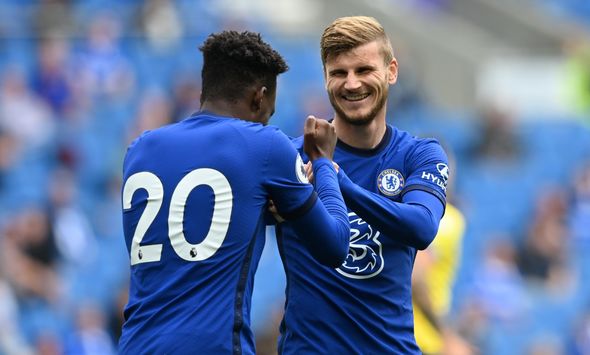 Havertz may find himself playing off the right flank but should return to a central role in the coming weeks.

Meanwhile, Werner could play from the left, with Lampard set to show loyalty to Olivier Giroud.

Christian Pulisic would be a guaranteed starter but he has only just returned to training following a hamstring injury.

Callum Hudson-Odoi could just miss out, but it would be no surprise if he started following an impressive pre-season.