Chelsea could be set to miss out on long-term transfer target Dries Mertens with the forward set to sign a new contract at Napoli. The Blues have been keen to bring in attacking reinforcements since the departure of Eden Hazard to Real Madrid, with Mertens high on Frank Lampard’s wishlist.

Chelsea welcomed Christian Pulisic permanently to Stamford Bridge in the summer while they have already secured a deal for Hakim Ziyech to join from Ajax at the end of the season.

But Lampard has also been keen to add more firepower to his squad in order to take some of the goalscoring burden off Tammy Abraham, with Napoli reportedly rejecting approaches for Mertens in January.

The Belgian is into the final six months of his contract at Napoli and Chelsea had been expected to renew their interest in the 32-year-old, who will be a free agent at the conclusion of the current campaign.

The pair were spotted out for lunch in Naples, reportedly for an informal meeting, but the report suggests talks progressed quicker than expected.

Mertens is now expected to put pen to paper on a two-year contract extension, keeping him at the Stadio San Paolo until 2022.

The forward is also set to pocket a signing bonus, with an agreement almost done.

Mertens has attracted attention from Manchester United, Arsenal and Inter Milan with all three clubs hoping to snap him up for free after another prolific season.

The veteran, who is Napoli’s joint all-time top scorer, has 12 goals and six assists across all competitions, including a vital goal against Barcelona in the Champions League last 16 first leg.

The developments leave Chelsea still searching for another striker, with Lampard short of options.

Abraham is currently struggling with an ankle injury so Olivier Giroud has started the past three matches, despite coming close to leaving the club in January.

The Frenchman remains ahead of Michy Batshuayi in the pecking order under Lampard, casting doubt on his long-term future at the club. 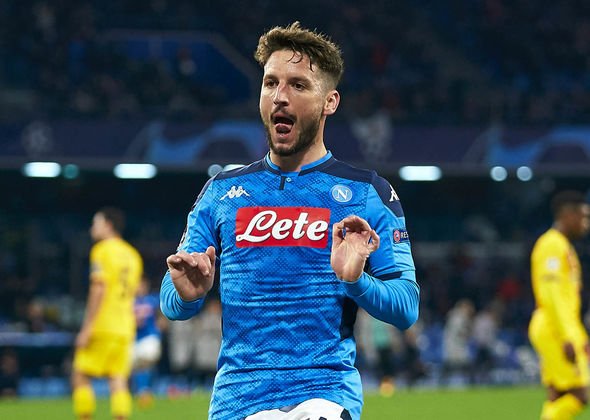 In addition to Mertens, Chelsea had been linked with Edinson Cavani in January before the Uruguayan opted to stay at Paris Saint-Germain.

The Ligue 1 giants were demanding £25million for the veteran striker, who is also out of contract in the summer.

PSG rejected an offer of £15m from Atletico Madrid and Chelsea were unable to sort out a deal for the striker.

When asked about Chelsea’s transfer plans, Lampard said: “It’s clear that we wanted to bring players in.

“I certainly wanted to bring players in. I think I’ve made that pretty clear over the last few weeks and it hasn’t happened.”