Chelsea star Willian will be out of contract at the end of the season after failing to agree a contract extension with the Blues and now the winger is considering his options with Manchester United and Arsenal both interested in the Brazilian.

The Blues’ attempts to keep the 31-year-old at Stamford Bridge have hit a problem, as the two parties cannot agree on the length of a new contract.

It has previously been reported that Chelsea were willing to offer a two-year deal but the veteran winger is seeking at least a three-year contract.

With only a few months left on his current deal Willian will be able to leave on a free transfer in June.

But he might not have far to travel if he decides to leave Stamford Bridge as there are Premier League clubs who are interested in offering him a deal.

According to French publication Le10sport, Arsenal, Manchester United and Paris Saint-Germain are the three main clubs in the running the sign him.

With clubs looking to stay on the right side of Financial Fair Play regulations, being able to sign a player of Willian’s experience for nothing makes the veteran a very attractive option.

Willian has played an important role for boss Frank Lampard this season, as the young manager looks to find a balance between youth and experience in his squad.

So far this season he has scored seven goals and provided six assists in 37 appearances in all competitions.

Willian joined Chelsea back in 2013 when the Blues paid Russian side Anzhi Makhachkala £30million for the player.

The report claims it is unlikely that Chelsea are going to change their over-30s policy despite reaching a deadlock in talks with Willian.

“Chelsea offered me two years and they are not going to change what they offered,” Willian said.

“The situation is difficult because of this, I really don’t know if it will be possible. 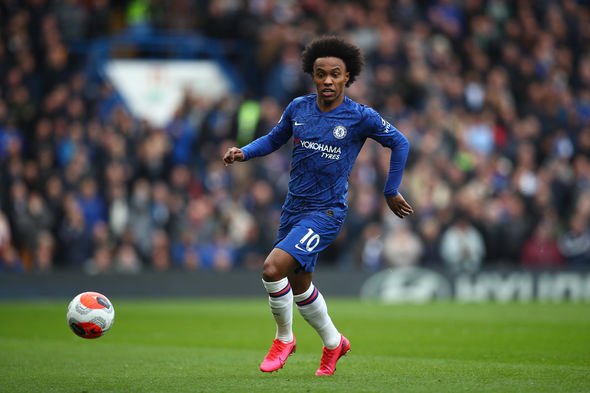 “My goal is to continue working and focus on the remainder of the season so that Chelsea can continue winning games.”

Willian has scored 59 goals and provided 59 assists in 329 appearances for Chelsea, during which time he has helped them win two Premier League titles, an FA Cup and the Europa League.

He recently scored in Chelsea’s 4-0 win over Everton on Sunday and after the game Blues’ boss Frank Lampard insisted his young players are helping the older stars in his squad feel youthful again.

“The younger players have injected energy to the club and the fans,” Lampard said, “Look at the reaction to [Billy] Gilmour.”

“But also look at the experienced players — Pedro running from virtually inside his own half for the second goal, or Willian all over the pitch today. As a group, everyone showed that energy.”