Manchester City and Chelsea can usually be relied upon to produce epic encounters full of excitement, tension and drama.

But an eighth FA Cup semi-final between the two teams in seven years provided only a convincing 3-0 win for the Blues.

Four days after Pep Guardiola’s side saw their dominance of the Carabao Cup come to an end, City’s women suffered their first FA Cup defeat in three years. The last team to beat them? Chelsea.

City were looking to the Cup to give them a lift after their dismal start to the Women’s Super League season.

Gareth Taylor’s side are 11 points behind leaders Arsenal with just one win from their opening five games. But it will be Emma Hayes’ side who will play the delayed 2020-2021 final at Wembley next month.

Chelsea weren’t at their scintillating best, but they didn’t need to be to beat a City team still suffering from absences. 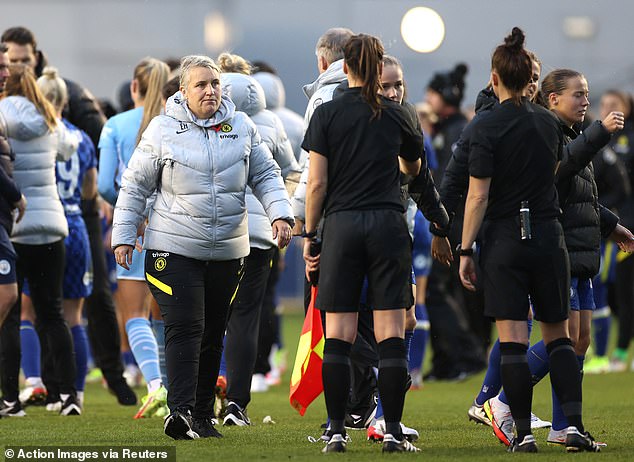 ‘I’m delighted to get to Wembley,’ said Hayes.

‘It’s the one day of the week I’ve only got to go down the road, to a football stadium, so I’m over the moon it just happens to be the biggest and the home of national football.

‘As a kid I always wanted to be there in some capacity, whether as a fan — I never thought I’d do it as a coach. Now I’ve been there a few times, I just want to go and win.’

Taylor was without nine first-teamers for this match. Six are still injured, Georgia Stanway was suspended and Alanna Kennedy and Ruby Mace were ineligible. But for all their difficulties, the hosts made a bright start and had chances to take the lead in the opening 20 minutes. 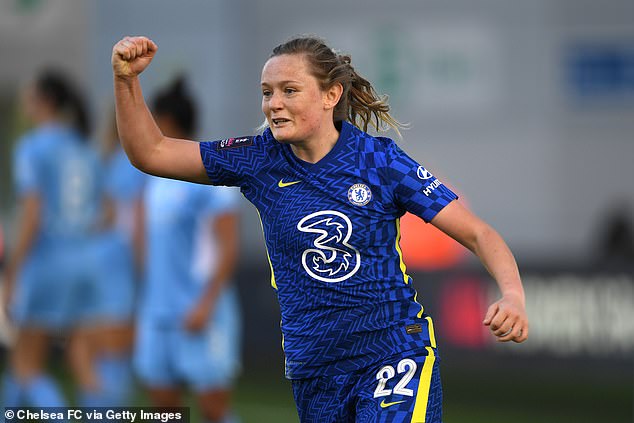 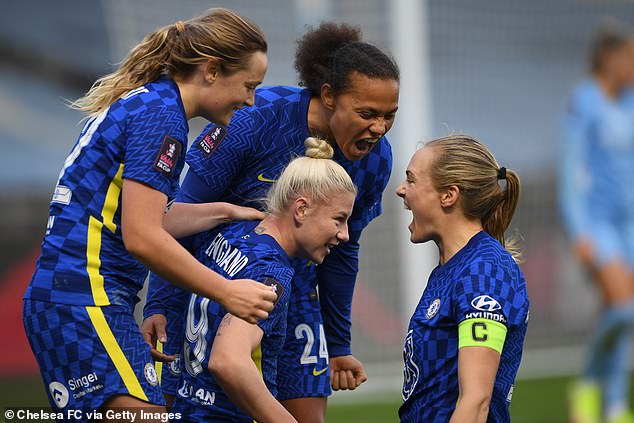 Lauren Hemp, who has comfortably been City’s best player this season, was causing problems down the left and her trickery and pace produced a near-post cross for Ellen White, but the striker’s first-time effort was off target.

While City looked dangerous down the wings, their vulnerability in defence continued to show and they went behind in the 23rd minute.

Erin Cuthbert got away from Alex Greenwood to meet Guro Reiten’s corner, taking one touch before firing a half-volley past Karima Taieb at her near post. Cuthbert’s shot was close to the City goalkeeper, who was beaten by the sheer power.

If Taieb should have done better with the first goal, she was certainly at fault for the second. It should have been a routine save to keep out Melanie Leupolz’s shot but she could only palm the ball into the corner of the net. 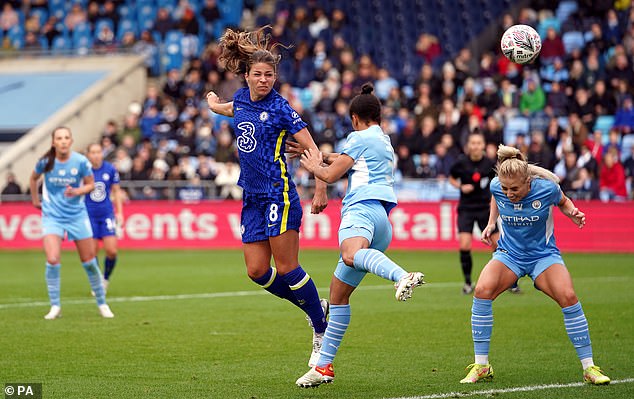 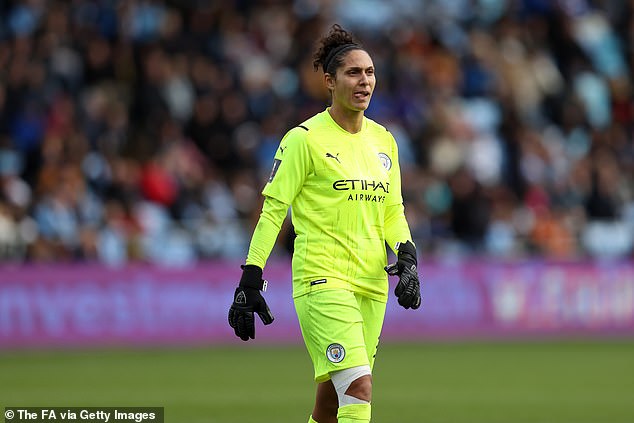 ‘We need to look at them again but you’d expect them to be saved,’ Taylor said on the opening two goals. ‘I was more concerned about the first one where we switched off defensively and you can’t do that against a team like Chelsea.

‘It dented the confidence, the two goals going in and affected the team and it took us until half-time until we were able to rally.’

Despite two horror moments, it was Taieb who was responsible for keeping the score at 2-0 before half-time with four impressive saves.

The first saw her block Sam Kerr’s shot with her legs before a reaction stop to deny Fran Kirby. She then managed to claw away Leupolz’s deflected header from the resulting corner. 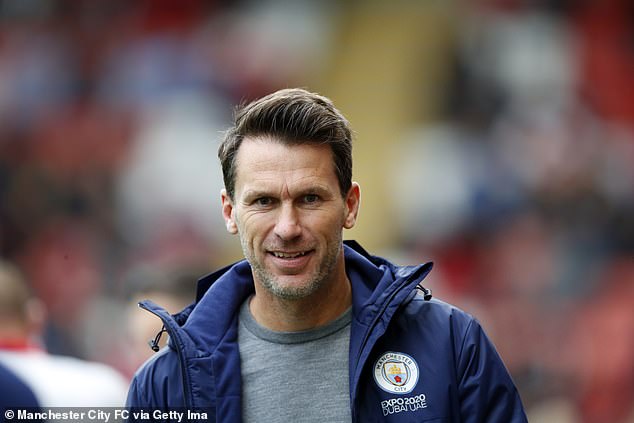 There was another vital save at the start of the second half when she got down to save Cuthbert’s close-range effort. But with the damage already done, those saves counted for little — such is the life of a goalkeeper.

Chelsea beat City to the Women’s Super League by a point last season and they are currently eight points ahead of Taylor’s side. They return to the Academy Stadium in two weeks and another defeat for City will all-but end any faint hope of a title challenge.

‘Champions of England, we know what we are,’ sang Chelsea’s fans throughout the 90 minutes and by full time they were singing ‘que sera, sera’.