Kepa Arrizabalaga continues to be overlooked by Frank Lampard at Chelsea, with the Spanish goalkeeper left out of the starting XI to face Bournemouth. Blues fans are not convinced by the decision, and many have questioned whether the omission means he could leave in the summer.

Arrizabalaga has not played since the 2-2 draw against Arsenal in January, with the 25-year-old losing his spot to veteran stopper Willy Caballero.

And Lampard has once again snubbed Arrizabalaga against Bournemouth, opting to deploy the 38-year-old Argentine between the posts instead.

Arrizabalaga became the world’s most expensive goalkeeper when he joined from Athletic Bilbao for £72million in 2018, but it looks like his days at Stamford Bridge could be numbered.

Reports of a part exchange involving Atletico Madrid goalkeeper Jan Oblak surfaced this week, and Chelsea supporters believe the latest omission is a big hint about his future at the club.

“Kepa benched for the 5th game in a row. RIP to his Chelsea career,” said one fan on Twitter.

One supporter cast doubt on Lampard’s decision, saying: “I’m really not behind the continued Kepa absence. I can only assume he wants to leave (I’ve zero supporting evidence for that). As he has potential as seen last season, Caballero has seen his peak years ago, and in my view had done no better since coming in to the team.”

Caballero has failed to keep a clean sheet during the five matches since his recall, letting in two or more goals in three of those games.

Supporters believe Arrizabalaga’s continued absence will not help his re-integration to the squad, with one saying: “I don’t want to keep Kepa out of the side for too long. Feel it could be bad for him.”

Others were more damning, saying: “Think kepa is dusted now.”

“Won’t be surprised if Kepa leaves this summer,” said another.

“Kepa is definitely leaving Chelsea,” was another response. 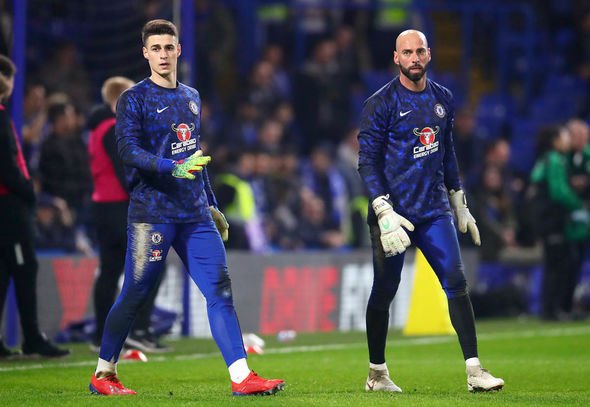 Fans have praised Lampard’s decision to recall Fikayo Tomori in central defence, although that does not mean they are entirely happy with the starting XI.

“Welcome back Tomori.. but what is this Kepa treatment?” said one.

“Joke of a lineup”, “Tomori but no Kepa still” and “Kepa deserves a Second chance” were other messages for the Blues boss.

However, one Tomori superfan was not interested in Kepa’s fate – instead writing “BIG FIKKKKKKKKK SUPER FRANK HAS SEEN THE LIGHT!”