Chelsea fans are delighted by Frank Lampard’s decision to include Billy Gilmour in his starting XI for the FA Cup clash against Liverpool. The 18-year-old midfielder makes his third start of the campaign having previously began two Carabao Cup ties.

Gilmour is the surprise inclusion in Lampard’s team, with the Chelsea manager shuffling the pack for Liverpool’s visit to Stamford Bridge.

A total of six changes have been made to the team that began Saturday’s league draw against Bournemouth.

Kepa Arrizabalaga returns between the sticks while Antonio Rudiger, Kurt Zouma, Ross Barkley and Willian are all recalled to the team.

Chelsea supporters, however, were focused on Gilmour’s inclusion and took to Twitter to express their eagerness to see the Scottish starlet in action.

“BILLY GGGGGGGGGGGG,” a second wrote all in caps.

While a final fan said: “Only Interested In BillyGoat Gilmour Masterclass… Here For It.” 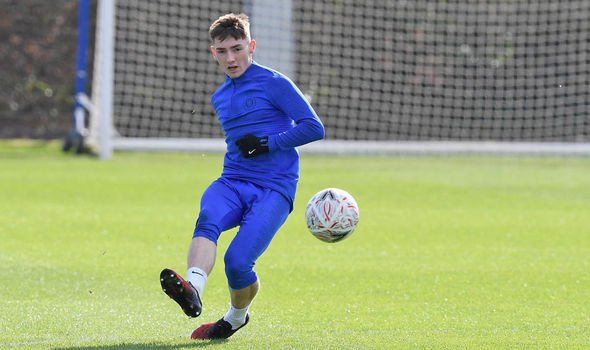 Chelsea are missing N’Golo Kante due to an adductor injury while Jorginho is facing a two-match Premier League ban after picking up 10 bookings this season.

As a result, Gilmour could be in with a chance to stake his claim for a spot in the team, and Lampard admitted as much ahead of the Liverpool clash.

“Yeah [Jorginho’s suspension will cause problems], but we’ll work round it,” Lampard said. “We’ll have to.

“We have players who can do it. Mateo Kovacic finished in the holding role, Ross Barkley, Mason Mount, Billy Gilmour…

“That will be the solution and it might open opportunities for other players.”