‘It was an amazing display of courage’: Champions Chelsea come through Tottenham test thanks to Sam Kerr winner despite playing for OVER AN HOUR with only 10 players

Champions find a way to win and that is exactly what an out-of-sorts Chelsea did at Tottenham yesterday.

Emma Hayes’ side had to come from behind and played more than 60 minutes with 10 players, but they got the job done and remain in the driving seat for the Women’s Super League title.

‘In crisis I think my team do really well,’ said manager Hayes. ‘There’s rarely been times in the last few years, in crisis, where we go under. It was an amazing display of courage, confidence, conviction, togetherness and camaraderie. You cannot understate it. It was the calmest dressing room in the world at half-time.’

Sam Kerr headed the crucial goal in the 71st minute before Jessie Fleming made it safe with the last kick of the game.

Tottenham made Chelsea battle though. They took an unlikely lead in the 15th minute when Sophie Ingle turned into her own net after Molly Bartrip’s corner hit the bar. Guro Reiten brought the Blues level midway through the half with a shot-cum-cross that sailed over Tinja Korpela and into the far corner.

Just when Chelsea looked to be back on track, goalkeeper Ann-Katrin Berger was sent off after cleaning out Rachel Williams, who was through on goal. 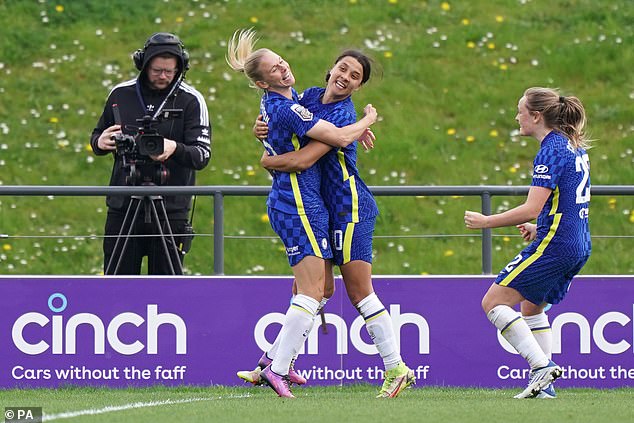 That threatened to make it an uphill battle for the visitors. Tottenham held Arsenal and Manchester United at home earlier in the season and had their chances.

Substitute keeper Zecira Musovic did brilliantly to claw away Kerys Harrop’s goalbound cross before Jessica Naz fired over from outside the box. Kerr only needed one chance though. The Australian got in between Viktoria Schnaderbeck and Shelina Zadorsky to head in Jonna Andersson’s cross.

Spurs were deflated and struggled to create any real chances from there before Fleming scored the pick of the goals at the death, curling into the top corner from outside the box. 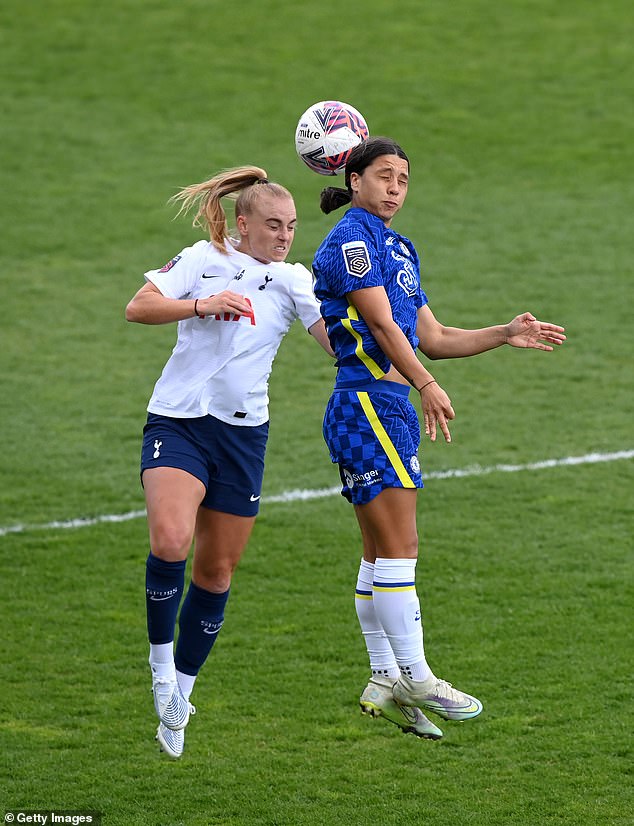 Rehanne Skinner’s side will have a big say in the title race. They play Chelsea again on Thursday and Arsenal on May 4.

‘Arsenal are our biggest fans in these two games,’ joked Skinner. ‘We want to make sure we finish higher than last year and are consistently competing with teams like this. We gave that a good go today.’

Arsenal’s victory over Everton means no change in the race for the title, with Chelsea one point clear at the top.