Chelsea fans were on a high during lockdown. The signing of Timo Werner has given the club new energy – at least when it comes to social media. And supporters will be delighted with Frank Lampard’s side for their actions on the field, too, with Christian Pulisic inspiring them to a 2-1 victory over Aston Villa on Sunday afternoon.

Chelsea went into the game against Aston Villa knowing victory would give them a crucial advantage in the race to finish in the Premier League top four.

With Manchester United failing to beat Tottenham on Friday night, the Blues would have opened up a five point lead with victory at Villa Park.

Villa had been poor last time out against Sheffield United and Chelsea went into the game as favourites, particularly given the positive vibes around the place at present.

They took a while to get going, with Kortney Hause’s goal just before the interval giving Villa a shock lead as they aim to stay in the top flight.

But Chelsea turned things around – with Pulisic easily the star of the show.

It’s been a rocky first season in the Premier League for the USA international, who touched down from Bundesliga giants Borussia Dortmund in last summer’s transfer window.

Pulisic has, for the most part, failed to fill the void left behind by Eden Hazard’s sensational move to La Liga giants Real Madrid.

But he may have just kickstarted his Chelsea career with arguably his finest showing to date.

Lampard has already been planning for next season, spending big on Hakim Ziyech and Werner as he eyes the Premier League title.

But Pulisic, a player whose move to west London was agreed before the club even brought Lampard back to Stamford Bridge, will want to be part of those plans too. 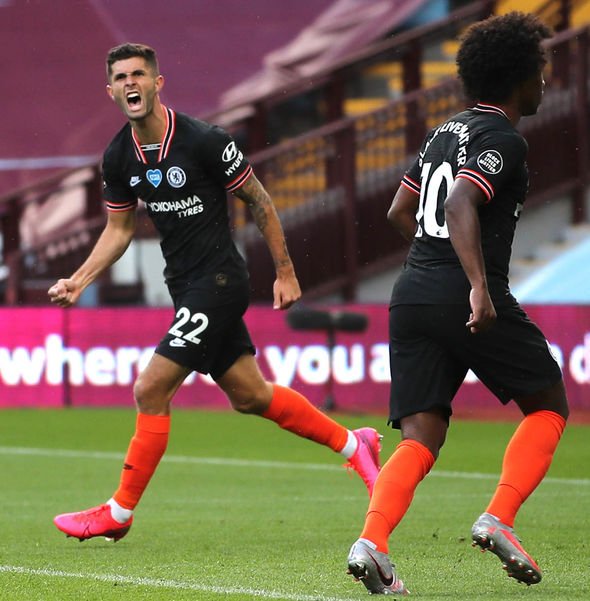 He was initially left on the bench for the clash at Villa Park, with Lampard choosing to go with Mason Mount and Willian either side of Olivier Giroud.

But he was introduced at half time with Chelsea, at that point, sorely in need of some attacking stardust.

Pulisic grabbed a crucial equaliser for Chelsea, making a speedy run into the box and throwing himself at a cross from Cesar Azpilicueta.

It was just what the Blues needed and, moments later, Lampard’s side got their noses in front.

Pulisic, again, was involved. The youngster found himself able to distribute the ball from the wing and found Giroud, who had space inside the box.

The France international then did the rest, turning his marker before ruthlessly dispatching the ball past Orjan Nyland in the Villa goal.

While Giroud was the match winner, though, the star of the show was Pulisic.

Now, Lampard has to start him regularly. The talent is clearly there it just needs harnessing – and the only way that can happen is by giving him more chances to shine.

If Chelsea do that, then Pulisic may do for them consistently what he managed in Birmingham on Sunday afternoon.