Chelsea defender Marcos Alonso has been included in the shortlist for February’s Premier League Player of the Month award after three goals in two matches. The Spanish defender was on target against both Tottenham and Bournemouth to earn his nomination alongside the likes of Bruno Fernandes and Pierre-Emerick Aubameyang.

Alonso has endured a frustrating season at Stamford Bridge, having lost his place in the starting XI to Emerson Palmieri then an out-of-position Cesar Azpilicueta.

However, the 29-year-old has been recalled in recent weeks after Chelsea manager Frank Lampard reverted to a 5-2-3 formation utilising wing-backs.

Alonso was drafted into the side for the meeting with Tottenham on February 22, making his first Premier League start since the reverse fixture against Spurs in December.

Chelsea won that clash at the new Tottenham Hotspur Stadium 2-0, and the Blues secured an impressive double with a 2-1 victory on home turf.

JUST IN: Six Chelsea loan players that could break into Frank Lampard’s first team next season

Alonso initially went close with a dipping volley before scoring a superb drive from outside the box to give his side a two-goal lead following Olivier Giroud’s opener.

And the wing-back continued his fine form with a heroic display against Bournemouth a week later, scoring the opener before notching a later equaliser to rescue a point in the 2-2 draw.

The brace has taken Alonso to a tally of 19 top-flight goals since joining Chelsea in 2016, while he has also provided 11 assists.

That total of 30 goal involvements is more than any other defender during that time.

Alonso is up against five other Premier League stars for this month’s award, including Manchester United new-boy Fernandes.

Fernandes has made an instant impact following his January switch from Sporting CP, scoring and providing two assists in three matches.

The Portuguese ace was on target from the penalty spot against Watford, sending fans into meltdown after mimicking Jorginho’s jump technique.

Aubameyang is also on the Premier League shortlist after three goals in three matches for Arsenal, scoring against Newcastle before hitting a brace in the 3-2 win over Everton. 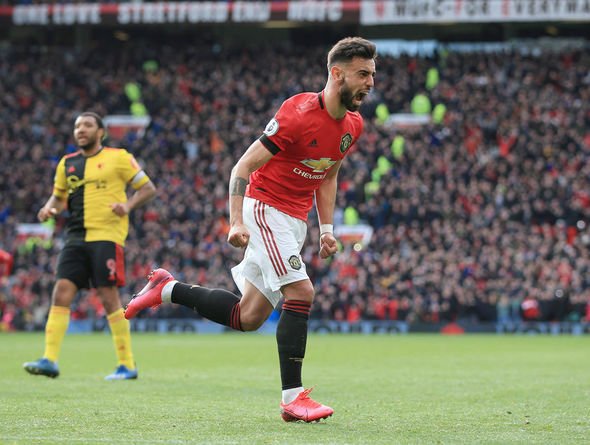 The Toffees have a representative of their own among the nominations, with Dominic Calvert-Lewin enjoying a purple patch under new manager Carlos Ancelotti.

The striker bagged two goals and an assist in February, while Burnley goalkeeper Nick Pope helped the Clarets keep three clean sheets from their four matches.

Finally, Matt Doherty completes the nominations after contributing to three clean sheets and also providing an assist in a 3-0 win over Norwich.

Meanwhile, Arsenal manager Mikel Arteta is joined by Sean Dyche, Ole Gunnar Solskjaer and Chris Wilder on the Manager of the Month shortlist.